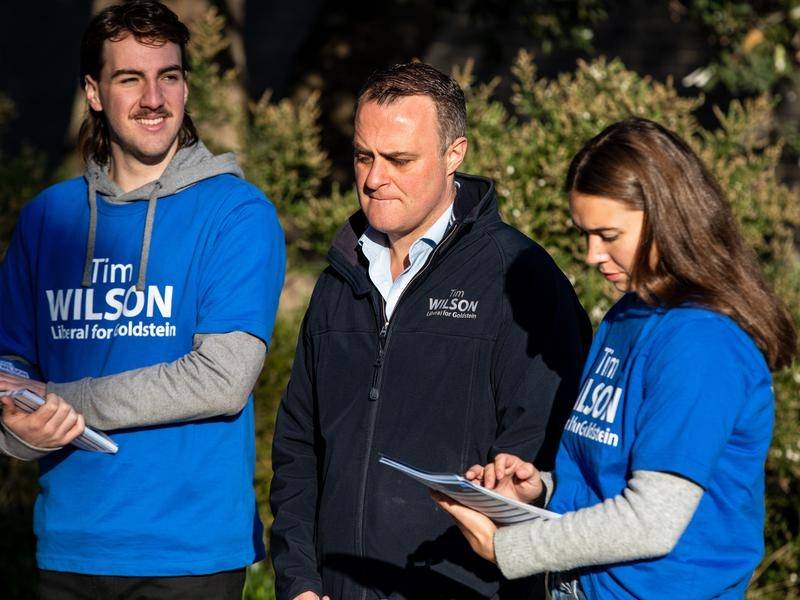 One-time rising Liberal star Tim Wilson has formally conceded defeat in the Victorian seat of Goldstein, tearfully acknowledging the outcome of the federal election was shattering.

Mr Wilson said that based on a count of a batch of postal votes, it was unlikely he would be able to retain his seat against teal Independent Zoe Daniel.

The former coalition assistant minister for industry, energy and emissions reduction suffered a 13.1 per cent swing against him in the former blue-ribbon seat.

"Nobody's going to pretend that you're not shattered in events like this," he told reporters on Sunday.

"I went into politics because I believe in the cause of Australia and the success of our nation."

Reflecting on some of his proudest moments in office, Mr Wilson nominated the ratification of an extradition treaty with China and kickstarting Australia's offshore industry as assistant minister.

He said it was a deeply unsettling time for the country and, whether he liked it or not, the election was a reset after two years of disruption.

"It's challenging to face the fact that you may not be able to play the continuing role that you wished to, that you hoped to, that you sought - and that it's handed to somebody else," Mr Wilson said.

"The only thing I can wish them is every success for that privilege that they have now inherited, and not to waste it."

Mr Wilson said he was proud of everything he was able to achieve for the community of Goldstein and Australia, and nobody could take that away from him.

He refused to speculate on his plans for the future, but said he always wanted to help take the nation forward.

"The thing about public life ... it takes an incredible amount of energy out of you. (My husband) Ryan can certainly attest to that. It takes an enormous tax on your family," Mr Wilson said.

"The question for people (is) about whether they're going to be able to rebound easily and come back straight away ... (but) there's also another part of my personality which is, I'm a fighter. I always have been."

Mr Wilson said he had to take responsibility for losing the seat because his name was on the ballot.

He said he had obviously won the primary vote, but not after preferences, and humility was important on all sides because nobody else got an outright majority.

"It is a great honour and privilege to have the opportunity to represent the Goldstein community," the statement read.

"It is what Vida Goldstein, after whom the seat is named fought for, and now a century later it has happened. I thank Tim Wilson for his service. I thank the community for your support and promise to represent all of you.

"I will do everything I can to live up to your high expectations."