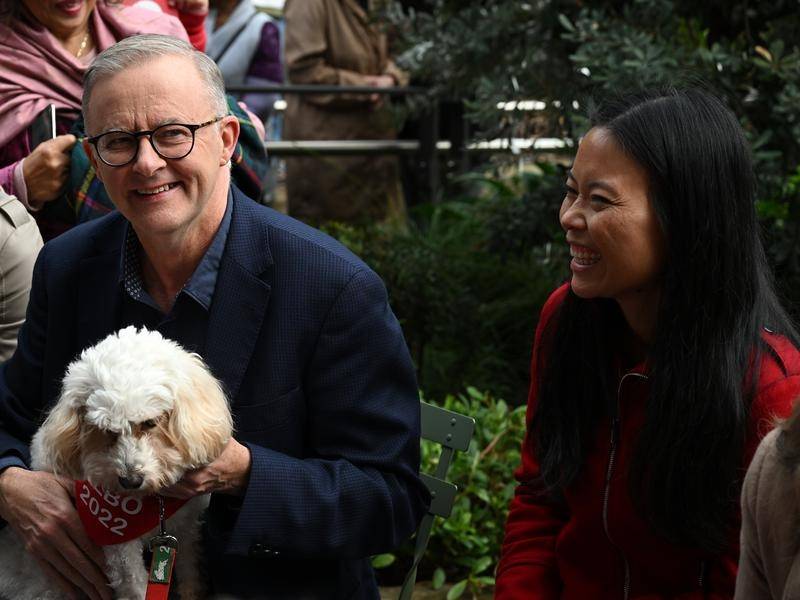 Anthony Albanese says he wants his election win to be a "big moment for the country", as the prime minister-elect prepares to be sworn into the top job. In hi...

Anthony Albanese says he wants his election win to be a "big moment for the country", as the prime minister-elect prepares to be sworn into the top job.

In his first public appearance since claiming victory at the election, Mr Albanese said himself and several key ministers would be sworn in as an interim arrangement on Monday before the full cabinet is unveiled at a later date.

Mr Albanese will be sworn in alongside Richard Marles, Jim Chalmers, Penny Wong and Katy Gallagher before the prime minister-elect flies to Tokyo for the Quad leaders' meeting on Tuesday.

The incoming prime minister was alongside his partner Jodie Haydon and dog Toto at a cafe in his inner-western Sydney seat of Marrickville on Sunday morning, stopping for a coffee and to thank supporters.

He later told reporters he was very happy to be able to represent the community.

Mr Albanese said he would also seek to convene a meeting with state and territory leaders upon his return to Australia following the Quad meeting.

The Labor leader revealed he had received a message of congratulations early on Sunday morning from rock legend Jimmy Barnes, who left a voicemail for the incoming prime minister at 3.30am.

He also revealed some details from his phone call with outgoing prime minister Scott Morrison following Labor's victory, with Mr Albanese saying he was in no rush to move into The Lodge or Kirribilli House.

Mr Albanese said he wanted Mr Morrison and his family to have as much time as possible to move out.

Also at the event in Marrickville was incoming Labor MP for Reid Sally Sitou, who took the seat off the Liberals on Saturday night.

She said her election victory was a large step forward for the multicultural community and their representation would make the parliament a stronger place.

"Asian-Australians want to see someone who represents them, and hopefully they see that," she told reporters in Sydney.

"You can dream big dreams, you are not defined by your postcode that you grew up in or the school that you went to or where your parents came from."

Ms Sitou said Labor would also have to reflect on its decision to parachute in Kristina Keneally to the southwest Sydney seat of Fowler at the expense of a local candidate, which led to controversy.

"At the end of today, it seems that Labor will not claim victory in Fowler. I congratulate Dai Le and wish her well," she wrote on Twitter.

Congratulations have poured in for the new prime minister, although it remains to be seen whether Labor will be able to govern in their own right or will need the help of an expanded cross bench in a minority government.

"Australia is our most important partner, our only official ally and single economic market relationship, and I believe our countries will work even more closely together in these tumultuous times," she said.

"Today must be the start of a new beginning for the aged and infirmed, the single mothers, the poor and isolated, the underpaid and the over-worked, the disabled and the dispossessed," he said.

The Australian Conservation Foundation head Kelly O'Shanassy urged Mr Albanese to start getting to work on cutting pollution, with the science backing tougher targets than Labor's plan to curb emissions by 43 per cent by 2030.