Meet the artistic director of the Australian National Academy of Music.

The artistic director of the Australian National Academy of Music, in Melbourne's inner east, is a Finnish piano virtuoso with a love of Beethoven and avant-garde music who also appreciates Eurovision and Usain Bolt's athletic performance.

Paavali Jumppanen is also very serious about setting his students on a path to musical and professional success.

Music has a unique capacity to touch and affect people, Jumppanen believes.

It is a kind of language or way of seeing that we all connect with in some way, and humans are naturally geared towards understanding it.

Jumppanen has recently been reading a book about how music operates in the brain and says that even newborn babies recognise the downbeat in a rhythm.

He has the chance to observe the phenomenon close up, given he and his wife Matilda have a 14-month-old daughter and another who is three and a half.

In a way, it is because of them that he is here in Australia, having "grabbed" the opportunity to spend a few years at the creative helm of the Australian National Academy of Music at Abbotsford Convent while the girls are young enough to live away from their home in Helsinki. 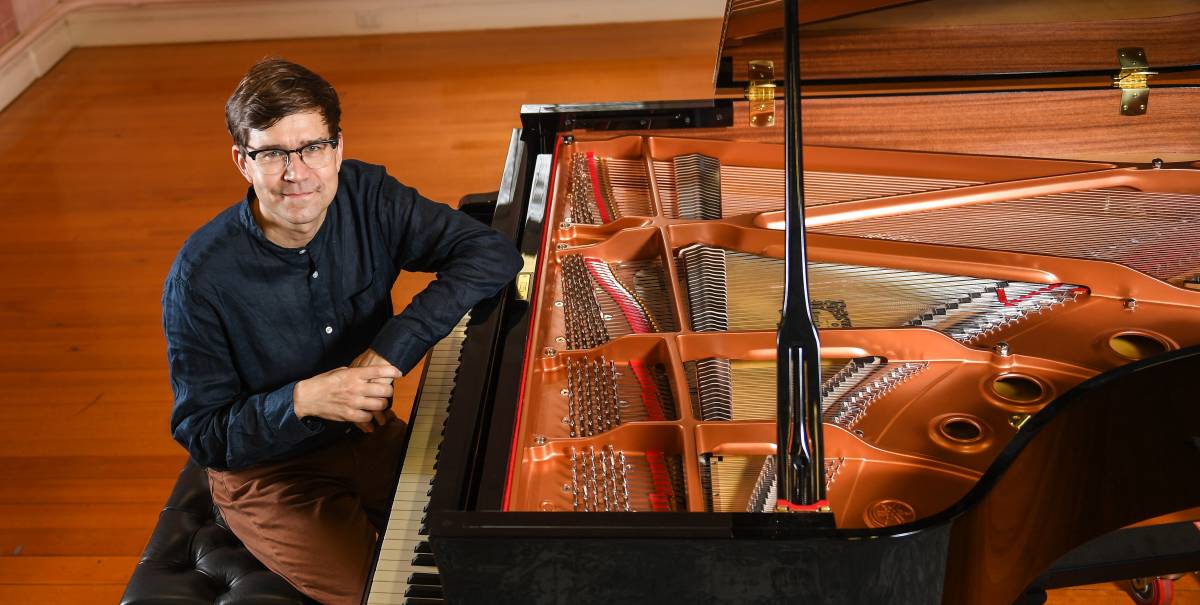 Jumpannen, an acclaimed pianist who has been touring internationally for 25 years, has visited Australia regularly over more than a decade and says he "fell in love" with ANAM when he first delivered a masterclass there in 2010.

Finding a "free-spirited cultural institution" with an atmosphere of fun and an intense dedication to learning, he immediately felt at home.

One of eight federally funded performing arts training organisations in Australia, ANAM is "dedicated to training the most exceptional young classical musicians from Australia and New Zealand".

Around 70 of them study there at a time for between one and three years.

With its performance-based approach, the school is possibly unique in the world, Jumppanen says.

In 2020 ANAM relocated from its permanent home at the South Melbourne Town Hall, which is undergoing structural work and renovation, to Abbotsford, where it is expected to be based for at least another year and a half.

While the academy has been described as a kind of finishing school for musicians who have already completed technical training, its artistic director is quick to point out that musicians never finish learning.

What the academy aims to do, he says, is give its emerging musicians the tools to become independent artists and realise their dreams of professional success.

"We need to put them on a path where they can keep learning and feeding their curiosity and finding new ways and means to respond to the music market and the world, which is evolving so quickly and so thoroughly," he says.

Despite being prevented by world events from taking up his post in the flesh when he was appointed in 2020, the artistic director has been busily applying those skills of curiosity and creativity to it ever since.

From the dark cloud of COVID-19, which stopped live performance for the better part of two years, Jumppanen, his colleagues and the musicians have carved out an extraordinary "silver lining" in the form of "a snapshot of Australian composition in 2021" which will be on display at the convent this weekend.

Last year the academy commissioned 67 solo works - one for each of its students - from 67 Australian composers.

The ANAM Set Festival will see more than eight hours of new music performed over a series of nine thematic concerts in different venues around the convent.

With 58 of the composers set to attend, the festival promises to be one of the largest ever gatherings of Australian composers.

"Now we are able to get together and enjoy this huge body of work," Jumppanen says.

"There's music for all of the orchestral instruments that you can study at ANAM and the piano as well.

"All of these instruments have new repertoire that will [go on to] have a life of their own [after the festival]."

The project, which was made possible through the federal government's COVID-19 RISE (Restart Investment to Sustain and Expand) Fund, provided students with new and challenging work to play during lockdowns and involved them in creative collaborations with the composers they were paired with.

"I think they're feeling great about it," Jumppanen says.

"The vast majority of them have had a tremendous time with their composers."

The virtuoso himself has learnt a lot through musical relationships.

From a young age he learned to love concerts through being taken along to them by his parents and was influenced by his brothers' charismatic piano teacher, who he describes as "my first idol".

But the pianist attributes much of his success to the luck of landing a good teacher in the Finnish public Music Institute system at the age of six.

"I got really lucky early on because my first piano teacher was really good," he says.

"She created this very inspiring class environment where the younger kids were exposed to the older kids' abilities and playing, and everybody was supposed to give feedback to each other.

"The group she created over the years turned out many professional pianists, even though she was basically teaching local kids in the Music Institute.

"I got into that class and I stayed there until I went to university."

Despite playing and teaching at elite level, Jumppanen conveys a sense of the same generous and egalitarian spirit about his craft that was nurtured in that first class.

Renowned for his interpretations of Beethoven, the maestro also enjoys the Eurovision Song Contest, and sees no contradiction between being amazed by both Usain Bolt's record-breaking 100m run and the Melbourne Symphony Orchestra's performance of Petrushka.

"I believe that music is far larger than just performance," he says.

"Ultimately, I see music as this huge cake, where there's an infinite number of small pieces people can take - 'That's my piece of music'; 'I like to listen to music on the radio when I drive a car'; 'I like to read about composers'; 'I used to listen to my grandchildren practice the piano'.

"There are many different ways of being with music."

There is also "a community of ownership" in a concert hall.

"People come there, they listen but you have no idea what's going on in their heads.

"I think it's beautiful.

"There is this very sort of a free spirit around how you can be with music, which is really great."

The ANAM Set Festival runs from 7pm Friday to 5pm Sunday at the Abbotsford Convent. Tickets and information at https://set.anam.com.au/

The story Meet the man in charge of the next generation of musicians first appeared on Inner East Review.