It took a radio identity to get an Adelaide-based band back together - 50 years after they last put out a record. After about 50 years since they last appeared on a chart, Adelaide band Buffalo Drive has reunited and put out two albums within months of each other.

The band, who had hits including Life's Been Good to Me before disbanding, has regrouped, performed at the past two Adelaide Fringe festivals, and this year, released Buffalo Drive Alive! and Start Again - their first recordings since 1973.

And while the faces are mostly the same, what they write about these days is different.

"We are aware that we are older and wiser and don't sing songs about 'picking up chicks!'," founding member Rod Boucher says.

"The older songs chosen from our previous repertoire are always about subjects that we feel are on people's hearts and the new songs have a particular age-related emphasis of remembering, journeying and surviving."

The band's sound, name and lineup changed in the space of 1964-1973, from folk to electric to Aussie rock. At their peak, they were touring and putting out original songs with the label Polydor, before the relentless schedule and lack of funds caught up with them. But a chance talk with a radio personality led to reconnections being made, and five of the six band members returning and forming again. 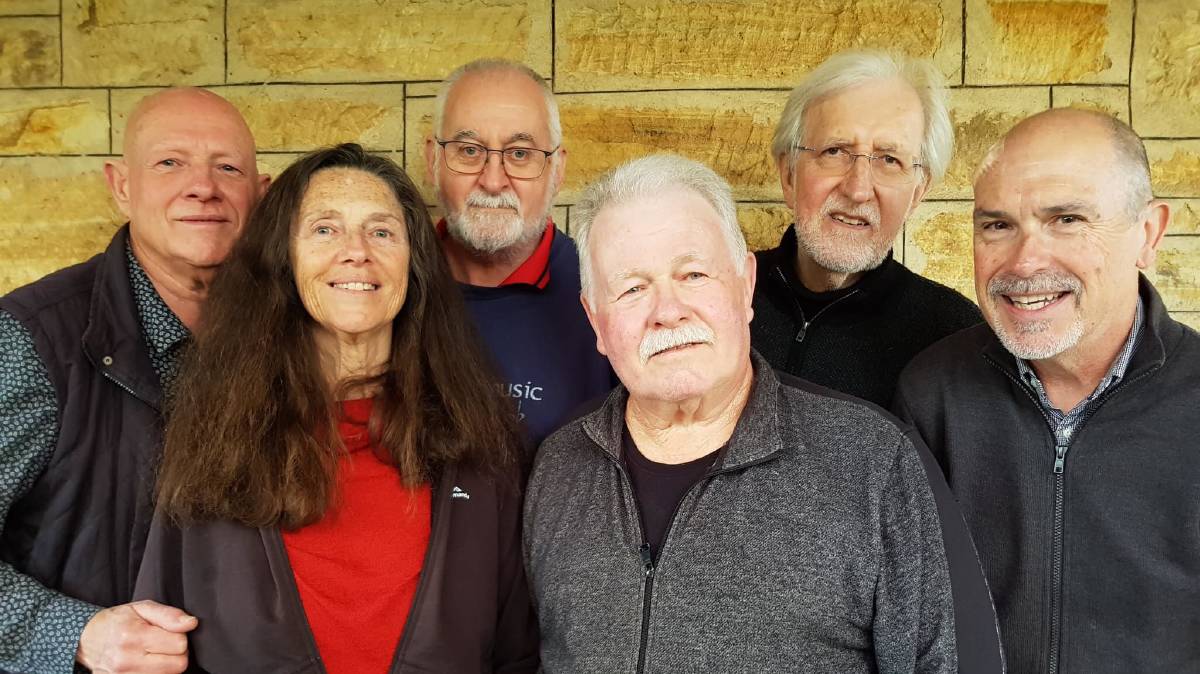 Buffalo Drive evolved from The Henchmen, a four-piece that started about 1964 and primarily played folk and gospel songs of the time. In the lineup were Rod and Jacko, along with Haydn Hill and Lincoln Tiver. Georgina joined as an additional vocalist in 1969 and the band changed names to Genesis - well before the successful English band of the same name - and played original songs plus popular international radio hits by bands such as Simon & Garfunkel, The Byrds, The Beatles, The Mamas & The Papas, and the Bee Gees.

"We learnt playing our instruments and harmony singing with folk music in the 60s because it was simple, portable, accessible and audience-involving," Rod said.

"There were large street demonstrations in Adelaide and on the news which were very moving and questioning. Pop music at the time seemed quite bland and of little consequence with no attempt to be relevant to the surrounding exploding culture. Gospel music has a strong history of passion and commitment, which attracted us."

In 1970 they were invited to go electric. With a fresh line-up they brought in a lead guitarist (Valdis Adamsons), bassist (Graham 'Grimy' Bettany) - who stood in for Jacko for six months, drummer Bodzac, and Hammond organist (Vello Nou) and became a six-piece, whose music evolved from the rollicking folk of the 1950s via popular covers of 60s and 70s hits to original songs with a feel-good, singalong vibe. And another name change - Buffalo Drive.

In 1972, after recording in Sydney with Polydor, the band cut down to a four piece lineup comprising Boucher, Nou, Jackson and Dunn, and switched to playing exclusively original material.

"Many folk groups became electric bands during the late 60s and early 70s (The Mamas & Papas, The Byrds, Bob Dylan, Steeleye Span) so pop seemed more relevant with its 'louder voice'. Three of us moved directly from acoustic to electric along with three others who were already electric and we always chose material that 'said something'," Rod said.

"As we moved into recording more original songs, we took inspiration from the Aussie places and people that we would see on tour. Driving through Kings Cross in Sydney was an ideal subject."

They continued to record with Polydor, releasing local chart successes Life's Been Good To Me, Money Stride and Follow the Line, with the first peaking at #8 on the South Australian 5KA Rock Chart in 1972, although Bodzac reckons that he heard the band reached #2 in Tasmania.

'Life's Been Good To Me' - Buffalo Drive

"Using banjo and accordion were unusual in rock but not unknown, so the Sydney producer of Life's Been Good To Me kept that happy, singalong feel that we were developing along with nicely kicking bass and drums. That recording pointed us even more into creating 'good time Aussie rock' which we continued to create and tour around Australia," Rod said.

In 1973 Buffalo Drive changed its name to Fair Dinkum to express the Aussie rock flavour of its songs. The band was a local live favourite and they received the 1973 5KA Rock Award for 'Best Live Performance'.

The band continued their gruelling interstate touring regime, which sadly took its toll and the band disbanded in 1974.

"We were paid very little even though we often performed five nights a week, so it was a struggle to pay rent and food," Rod said.

"We toured to WA a couple of times and were flogged to death doing over 30 shows in a month, sometimes three per day. We toured to Sydney and tried to live in Melbourne for six months doing their scene, trying to hit the big time. We supported Billy Thorpe and the Aztecs in Sydney, Melbourne and Adelaide as well as other big acts of the time.

"During our existence there was not much on television from which to get publicity; Countdown, which was great for getting band recognition, didn't start till 1976. We didn't do drugs so were very aware of the sacrifices our families were making for our art'.

"After four years the need to move from Adelaide to Sydney - the 'big smoke' and bigger opportunities - was a move too far."

We all get on very well so enjoy each other's contribution to the sound and presentation. - Rod Boucher

In the years that followed, band members mostly kept in music; Valdis died early in his 30s and Haydn in his 40s. Vello is still alive. The other band members continued in music - Bodzac and Grimy in other local bands; Jacko got into teaching, conducting primary school choirs and performing in other local bands; Rod continued solo and also in collaboration with his sister.

The idea of reforming came in 2019 from former 5AD/5DN DJ Jim Slade, who organises the Baby Boomers Rock Adelaide concerts. Slade suggested since so many members were still alive, that they get together and participate in a show. Alas they did reform and aimed for a 2020 gig, which was cancelled due to COVID. As such, the band created a show for Adelaide Fringe Festival 2021 called The Evolution of Buffalo Drive tracing the members' journey from 60s folk, 70s pop and 80s rock. It was such a success they put together another show for Adelaide Fringe 2022, The Evolution of Buffalo Drive... continues...

Rod said being on stage again together was scary and exhilarating.

"We all get on very well so enjoy each other's contribution to the sound and presentation," he said.

"We are much more mature and skilled musicians than we were in our 20s and even in our 70s, are still enthusiastic about playing and singing tight, tuneful, engaging and involving songs, old and new.

They recorded their first album Buffalo Drive Alive, a live capture of their Adelaide Fringe 2021 shows, and released it early this year on CD and online via Bandcamp.

"We loved the 'feel' and interaction with each other and the crowd and the way that we humorously captured a brief history of our musical journeys," Rod said.

As much as they love the old material, writing new content is also fun. In mid-May, they released another album Start Again, a studio album of all new original material and is also available online via Bandcamp and on CD. The cover of that album includes a cartoon drawn by Haydn for the single Jumpin' Judy. 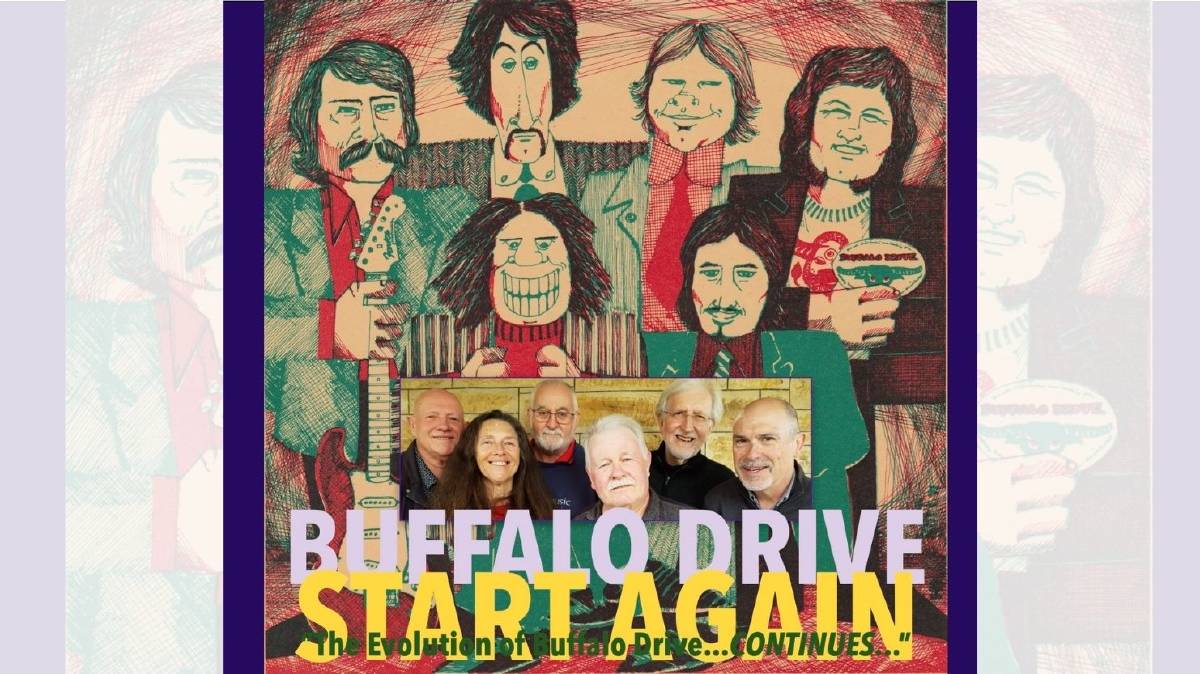 "There is a great feeling of accomplishment to start with a blank page, write words, chords, a melody and arrangement, take it to a bunch of friends, create an exciting sound and then share it with as many others as possible, live and recorded. We are made to create and we all find real fulfilment when we complete the process again and again," Rod said.

The recording equipment and process might be similar in principle, but the processes and dynamics have changed.

"In the late 60s early 70s we went into multi-track recording studios, local and interstate, recorded original songs and released vinyl records, mainly 45s. We would tend to work with a producer/engineer who would 'call the shots' to record and mix, with every recording situation being different, unfamiliar and strange," Rod said.

"These days we have multi-track, high quality digital recorders on our iPads so we can record in familiar places, relaxed and in control. There are pluses and minuses for the new way, but it all still comes down to promotion and distribution. Record companies - Nationwide and Polydor for us - paid for the recording and took responsibility for the rest of the process. Nowadays, it's all up to us. That's tricky."