Excellent grounds for a French-derived sport inspired Judy Whiteaker to move interstate for a slice of the action. 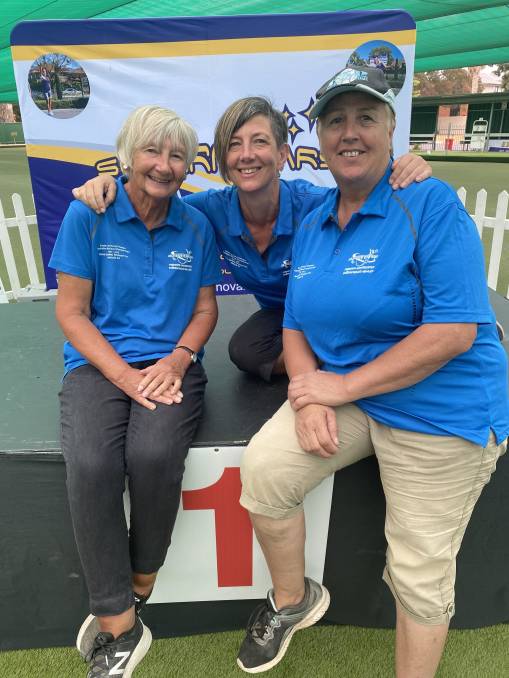 However, excellent grounds for playing pétanque, as well as a warmer climate and a beachside lifestyle, encouraged mother and daughter Judy and Giselle Whiteaker to move from Hobart to Adelaide.

They wasted no time in joining the Novar Gardens Sports Club, which hosted the Australian National Pétanque Championships 2022, and drew in hundreds of people from across the country to Adelaide for the five-day event. There, the women won the open women's triples tournament, along with teammate Wendy Benson.

At the same event and venue in 2021, Judy won the over 60s women's championships singles title, and it was from this experience that she and Giselle decided last July to move to South Australia and buy an apartment in Glenelg that they now share.

"We thought, 'ooh, it'd be nice to live near the beach, and the weather is lovely'. So we thought 'right, let's do it'," Judy said.

"We could live near the beach and have a club nearby."

"It made Glenelg a good destination for us."

Judy admits there was some trepidation.

"We thought 'Let's see how this goes; given we have not lived in the same country for 30 years, we didn't know how we'd go living in an apartment together," she said.

"We have our moments."

For the uninitiated, pétanque, sometimes called boules, is a target sport, where players stand with both feet inside a circle and throw metal balls (boules) along the playing area, called a piste. The aim is to get the ball to stop as close as possible to a small wooden target ball, called a cochonnet. The sport, which originated in France, has similarities with lawn bowls.

In Australia, there are around 1800 licensed players registered with the Pétanque Federation Australia, as well as a large number of social players across the country and 60-odd affiliated clubs.

Judy started playing the sport in Hobart when she was still working, initially in social Thursday evening summertime games, before playing more seriously and regularly once she had retired. Meanwhile, Giselle had moved to London, and while Judy was visiting, she found a pétanque club, which had some younger members. Alas, she brought her daughter along for a game, and Giselle started to get involved in the sport in her own right. When Giselle would go to visit her mum in Australia, she'd also join in on the activities at the Hobart club.

They've since gone on to become the South Australian state women's doubles champions as a duo, as well as enjoy their own solo successes.

Judy said it's a game that can be played socially and competitively.

"I've had a lot of people, especially women, who have never played a sport in their life, say 'Here's a sport I can actually play and enjoy'," she said.

Judy said you try to 'loop' the boule, rather than throw it, and try to get spin on it. Her wrists aren't as strong as they used to be, so she uses the ends of her fingertips to get spin and help with the boules's landing.

Boules have different weights, which can be used for different tasks. For example, a heavier ball might get closer to the cochonnet on an initial throw, while a lighter boule can be used to knock out a competitor's boule in later throws.

"It's sometimes called the three-minute game because the rules are quite simple," Judy said.

"You spend the rest of your life learning strategy and technique - strategy is everything. It's similar to croquet - you need to bethinking two or three moves ahead."

Judy is particularly impressed with the local pétanque scene, as there is an SA State Interclub Competition where all of the clubs compete, and a large number of active clubs across Adelaide with their own offerings.