He's played for the Dalai Lama, but there's one person musician Chris Finnen was most proud to perform for. He opens up ahead of the Adelaide Guitar Festival. 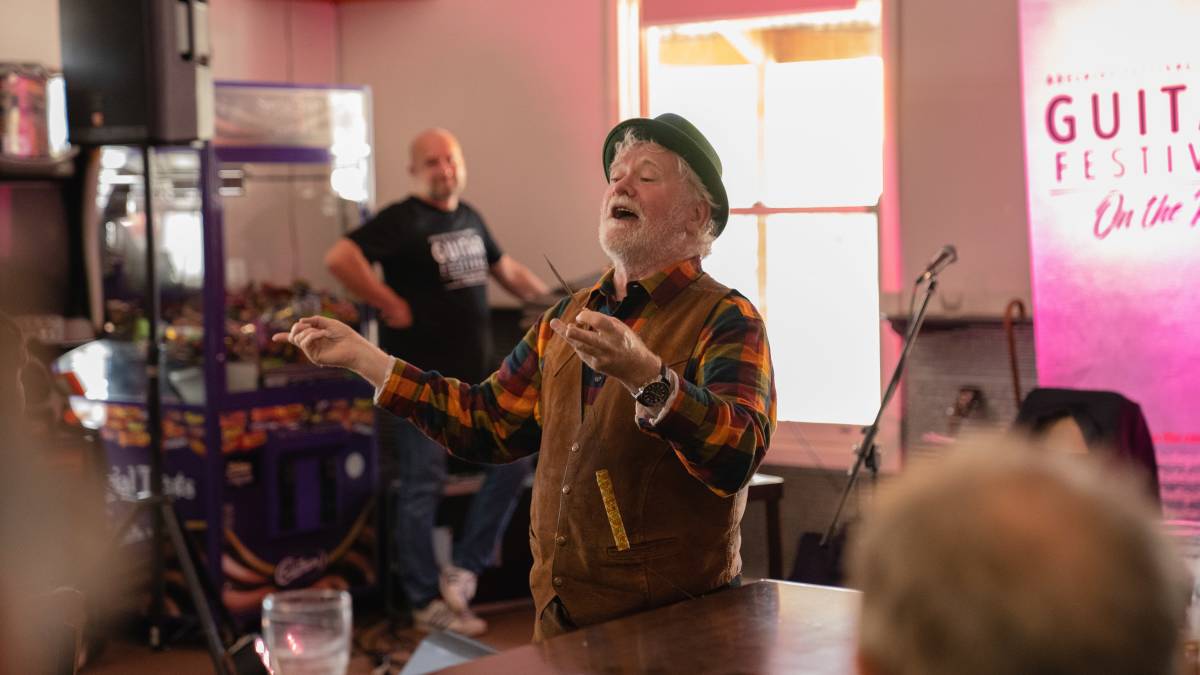 He's played for audiences world-wide but Chris Finnen's proudest moment was playing acoustic guitar to his son when he was just 30 minutes old.

"That was the first live music he'd ever heard in his life," he said.

The Seaford Rise resident and blues enthusiast has played the guitar since he was 10, and music permeates every aspect of his life; even his answering machine has him playing a few chords.

"If you find I'm not at home, leave a message on my telephone," he sings while strumming on the voicemail recording.

Now 69, Chris has played for the Dalai Lama, performed with greats including Buddy Guy, Keb' Mo' and Mavis Staples, is involved in several bands, and is an inductee into the New York Blues Hall of Fame.

He's also been a regular at the Adelaide Guitar Festival - Australia's largest guitar festival and a sister event to the New York Guitar Festival - since its inception in 2007, and will be involved again this month.

As a performer, he's either played in his own band or as a collaborator with an electric and an acoustic guitar, and performed in styles influenced by Indian, jazz and blues music.

He's also been involved in the festival's On the Road showcase to towns across regional South Australia. He recalled a time at an aged care facility on Kangaroo Island where he overheard music coming from another room.

"Some people were playing songs on a ukulele, so I sat at the table and joined them - there was a chance for spontaneous community playing," he said. 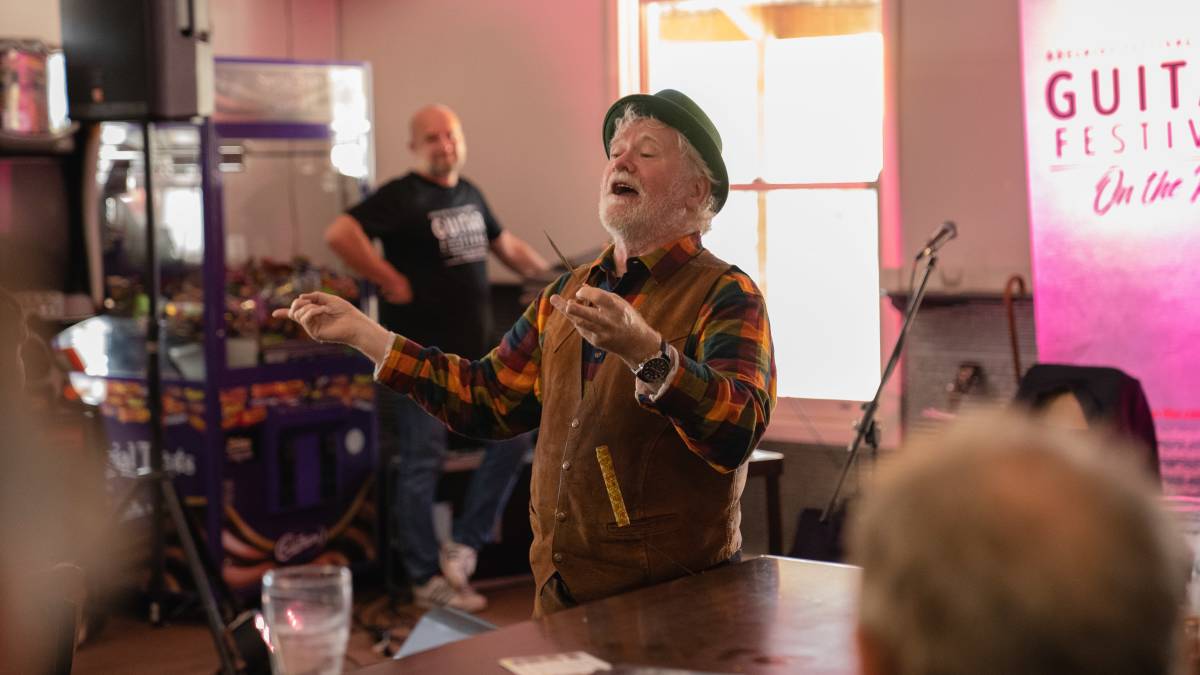 Chris at an On the Road session at Parndana, Kangaroo Island, in 2021. Photo supplied.

And it's this community-building aspect that he seems to love the most.

"For many years, people would play around (an instrument) and play music together. Any chance to do that is great."

This year, he will partner with Cal Williams Jr and will perform as the Finnen Williams Duo at the Gumeracha On the Road event on Sunday, July 24.

Also, he'll be a full-time tutor at the festival's week-long winter school program, helping participants create their own songs and with playing, particularly in the blues and roots stream.

If there's one basic focal point for someone new to guitar, finger placement is it.

"Giving whatever note a voice; learning how to put meaning into the notes; tone, expression, no matter how simple, give it heart - give it that human element," he said.

Having an individual voice, plus being able to work in a group as well as solo were also important skills to develop.

Chris picked up the guitar for the first time as a 10-year-old living in Red Hill, Surrey, England, in 1962. In those days, a radio was still the dominant entertainment device in the house, and not everyone had a television.

He was listening to jazz and Louis Armstrong, and later there was folk music from the likes of Pete Seeger and Bob Dylan, and finally The Rolling Stones and The Beatles.

He'd listen to the radio show Saturday Club, which presented all kinds of music in a radio segment.

And while those western bands were awakening, it was a record called The Blues Volume 2, which had the likes of Chuck Berry, Buddy Guy and Muddy Waters on the track list, where he picked up where the English bands drew influences from.

"The guitar was so exciting; the notes, the distortion," he said.

After that, Chris wanted to play electric guitar, but his father said "you need to learn acoustic first" - and it's a lesson he has since appreciated.

"When you stand in the middle of a circle of people playing acoustic guitar together, you're surrounded by it - they've all got a box, some instruments have nylon strings, others have steel. You don't have an amplifier overpowering anyone. It's an organic voice as there's no electricity there," he said.

He also took on Indian, Celtic and Native American sounds. He first got a taste of Indian influence with the song Within You Without You by The Beatles.

At the same time, he was listening to African music such as Miriam Makeba, and he started to buy Indian music for example Ali Akbar Khan.

"I embraced Indian music that matched up with the blues - bending notes but still having rules to adhere to."

He migrated to Australia at the age of 14 in the late 1960s and it was in the state of Victoria that he started his 'musical apprenticeship' - learning how to play and getting gigs where he could. It was in 1970 that he met long-time collaborator and friend Phil Manning, who he has played with numerous times.

Since then, he performed in various bands or created his own, for example In the 70s he led the Chris Finnen Offering and in the 1980s, started playing with the quintet Indian Pacific, which played for the Dalai Lama when he visited Adelaide in 1992.

In 2013, he was inducted into the New York Blues Hall of Fame. There was a musician from New York who came to Australia regularly and would invite Chris to perform at his shows, and would also perform at Chris' shows. Chris happened to be at a particular blues festival and it was there that to his surprise, the friend presented the award to him.

"I'm very proud to think that the blues is such a personal musical platform. We've taken on something originally from North America or even further, Africa...and eventually it became Australian blues - we've taken something that's part of their musical voice, and turned it into something here."

At the moment, Chris is working on a new book, an acoustic solo CD, and an album with his electric group The Chris Finnen Band.

Despite the influence of technology, how the music industry has changed over the years, and his age, Chris is so grateful to still be playing.

"I consider myself lucky to still have a chance to use music for the benefit of other people," he said.

"Playing hands-on music and having the opportunity to share it. Music is there to be shared."

Adelaide Guitar Festival is on 9-24 July.