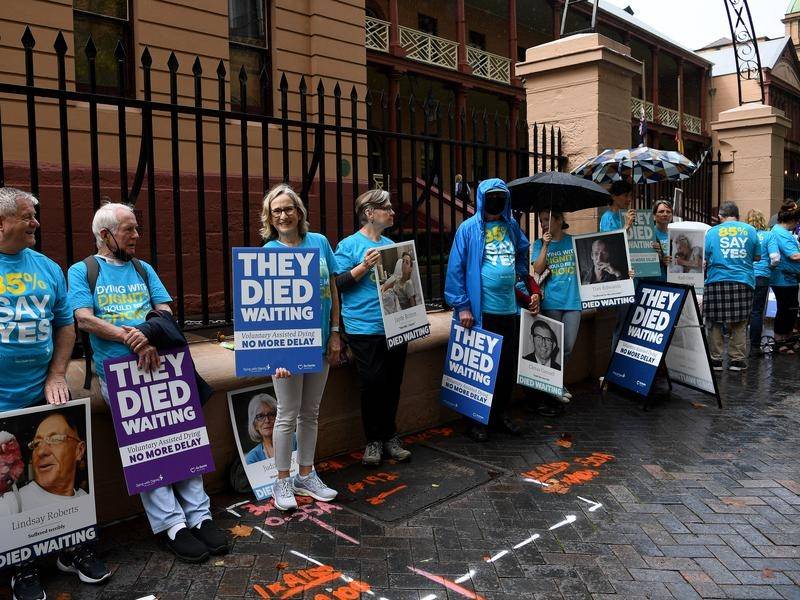 The Voluntary Assisted Dying Bill will be voted on in the NSW upper house this week.

The Voluntary Assisted Dying Bill will be voted on in the upper house on Wednesday.

Advocates for legalised voluntary assisted dying are hoping their goal will be realised this week in NSW, making it the last state in Australia to have legal euthanasia.

Dying with Dignity NSW President Penny Hackett says "It's time to get this done".

"Any further delay will see more terminally ill people dying in unbearable suffering, for no good reason. In this campaign, every day matters," Ms Hackett said.

"Too many terminally ill people have died waiting for this law to pass."

The Voluntary Assisted Dying Bill will be voted on in the upper house on Wednesday, then either go immediately to a final vote if no further amendments are put forward - otherwise it will move to the committee stage.

The bill was debated in the upper house last month, with 13 speeches given, including nine in favour and four against.

The bill passed in the lower house last year with a margin of 20 votes, after being introduced by Independent MP Alex Greenwich.

If passed, those with a terminal illness, who are expected to live for less than 12 months, will have the right to expedite their death.

"We are looking forward to the debate resuming in the Upper House tomorrow, and hopefully there will be a Second Reading vote tomorrow evening," Ms Hackett said on Tuesday.

She wants Upper House MPs to allow adequate time for a second reading vote and keep in mind the law was supported by more than 80 per cent of the community.