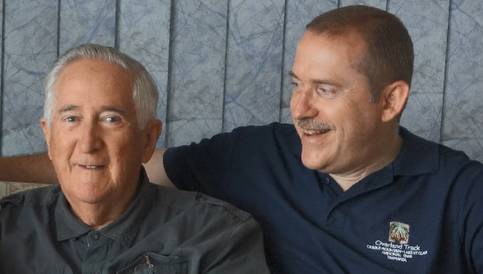 FAMILY MATTERS: Parkinson's diagnosis proved to be a bonding experience for Roy (right) and Donald Hazelwood.

Parkinson's helped Roy Hazelwood open up clearer lines of communication with his dad.

Roy Hazelwood's Parkinson's diagnosis was unexpected, but allowed him to establish a connection with his dad that goes deeper than genetics.

The 61-year-old Northmead resident found out he had the condition 10 years ago, while his father Donald received his diagnosis around eight years ago.

Roy found out he had Parkinson's after developing a pronounced tremor in his hand while helping his daughter with some renovations.

"I went to see the GP, she looked at me and her face fell. She said 'I think you've got Parkinson's'," Roy said.

"The reason she could tell is, my face was like a mask. Parkinson's makes you look very somber.

"Even if you're feeling very happy or joyful, it doesn't translate to your facial expression."

Donald - a former band leader of the Australian Symphony, developed a tremor in his left hand several years later, leading to his own diagnosis. He likes to joke that he inherited the condition from his son.

Sharing the same condition has been a bonding experience for Roy and Donald, opening conversation pathways the pair had not previously explored.

"It's been good actually, we've discussed what our different specialists have said.

"He's very old school - he was brought up on a farm, was always very focused on his music, he's not so much of a sharer.

"It's allowed us to talk about more sensitive things like retirement living, aged care and stuff.

"As Anglicare customer contact centre manager, I've always wanted to have those conversations with him.

"We've been able to have good discussions and talk about his needs as time goes forward."

Roy's treatment path was a long and at times arduous one. He was initially prescribed medications to help control his tremors, but reached the point where he was having to take an unsustainable amount. He then tried self injections, and then brain stimulation therapy. The latter was a complicated procedure which involved insertion of probes in the skull while under local anesthetic, followed by the insertion of a battery in the chest while under general anesthetic.

While the procedure may sound daunting, Roy said it had made a huge difference when it came to controlling the tremors.

These days he has a great quality of life, still enjoying his hobbies of using chainsaws and trail bike riding, and regularly speaking at conferences as part of his professional duties. A keen musician, he still enjoys playing drums, but no longer performs due to his condition.

Roy is taking part in QIMR Berghofer's Australian Parkinson's Genetic Study, which is funded by The Shake It Up Australia Foundation and The Michael J. Fox Foundation.

Researchers hope the study will make a difference to those living with Parkinson's by helping to identify genetic factors influencing risks of developing the condition.

There are thousands of genetic factors to be researched, but scientists hope better understanding could revolutionise treatment, prevent, and slow the progression of the disease.

Researchers require thousands of Parkinson's patients to help them carry out their very important work.

"I've noticed that there are a lot of inconsistencies out there with different specialists, different medicines and different approaches," Roy said.

"I'm hoping we can get some consistency and clearer indicators which will bring people to a better (plan) treatment sooner."