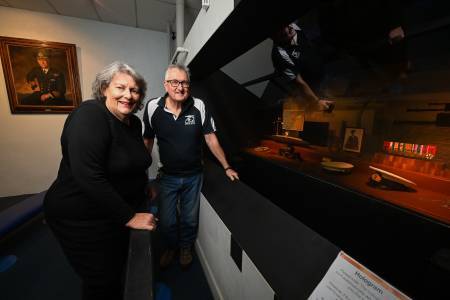 Since about 2000, the valuable medals have been on display at the Australian War Memorial for their safekeeping and security.

War medals, which are owned by the people of Holbrook in southern NSW, and estimated as worth more than $1 million, have had their lease at the Australian War Memorial in Canberra renewed.

Greater Hume Council renewed the lease of Commander Norman Holbrook's medals again so they could be properly cared for and displayed.

Councillor Heather Wilton said the medals were awarded to the British Commander as a result of his "fantastic exploits" during the First World War as a submariner.

"Over time Commander Holbrook came to Australia with his medals, very precious medals including a Victoria Cross and the French Legion of Honour, which was one of their highest honours, and he presented those to the people of Holbrook," she said.

"They were displayed in various places and then they were stowed away, they were kept in the bank volt."

Since about 2000, the valuable medals have been on display at the Australian War Memorial for their safekeeping and security.

Holbrook Submarine Museum curator Morrie Jeppensen said if the medals were to be on display in Holbrook they would need to be monitored by a security person all day and then returned to a secure volt each night.

"A VC sold recently in the UK for 680,000 pounds for a British one, it was a world record, it was bigger than the Australian one, which sold about 10 years ago, a Gallipoli VC sold for $1.2 million Australian," he said.

Cr Wilton said the medals would get more exposure at the Memorial.