You might get one chance to see this flower bloom. 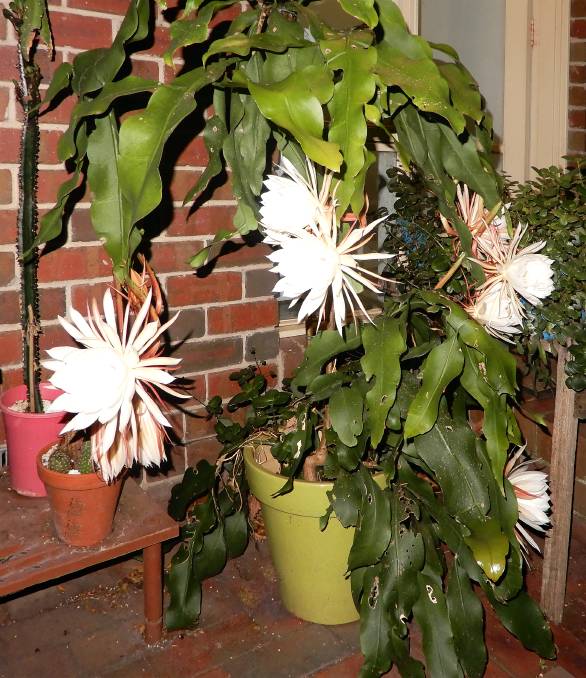 YOUR MAJESTY: The queen of the night cactus is glorious. Photo: Paul Lucas

In 1993, I went to see a film called Dennis the Menace which starred one of my favourite comedians, Walter Matthau, who played Mr Wilson.

In this film, he was a member of an exclusive garden club whose members collected unusual plants, one of which was a very rare orchid that flowered only once every five years, and then only for a few minutes.

On this occasion, Mr Wilson had all the club members at his house for the event and at the critical moment Dennis the Menace distracted them and they missed the flowering.

The Queen of the Night (Epiphyllum oxypetalum) is one such flower, although there are several similar in this family.

However, instead of the once every five years' occurrence, it flowers (at least for me in Melbourne) every January and February but each flower only opens for the one night.

Fortunately, there are usually several flowers on the plant at the one time so you get more than one chance.

You can tell when they are about to bloom because the flower bud swells. Keep watch and around midnight the flower slowly opens.

The perfume is truly amazing and the flower itself is glorious - huge and white, with tiny hints of pink. By morning, the flower has faded, but it is an extraordinary performance.

This plant is a climbing version of one of the many jungle cacti native to the South American continent. It doesn't look like a cactus, having elongated stems and prickles.

I like to collect some unusual plants if I can find them, not to show off but because they add interest.

There are several cacti and succulent clubs throughout the country, as well as some specialist nurseries who might stock it.

If your garden is in Melbourne or further north it needs a sheltered position in semi-shade where you can grow it in a large pot.

As it takes a while to settle in before flowering, look for it now and, with any luck, you will have flowers by next year.