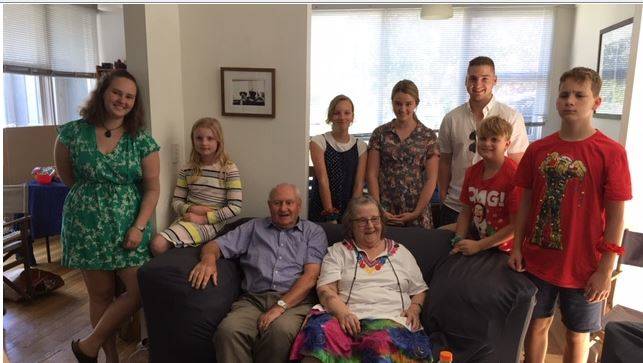 FAMILY TIES: Wendy Pfeifer and husband Bob (seated) with seven of their grandchildren.

It may sound strange, but when Wendy Pfeifer was diagnosed with myeloma, she felt relief.

The 74-year-old from Templestowe in Victoria had been feeling very unwell for two years in the lead up to her eventual diagnosis, having suffered from bone pain, fatigue and recurrent chest infections.

Doctors had dismissed her ailments as symptoms of menopause, she was referred to a psychologist and ended up spending a week in a psychiatric ward.

May is Myeloma Awareness Month and Wendy has a simple message for those who have recurrent or persistent symptoms - see a doctor, and if you feel something is seriously wrong, don't let the problem be dismissed, make sure you receive the help you need.

It was 1996 when Wendy was finally diagnosed with the form of blood cancer. She had just been taken to hospital again with another severe chest infection, high temperature and vomiting. This time her daughter refused to leave her side until she was confident her mother would be admitted and receive the help she needed. Three weeks later, she received the diagnosis of myeloma.

"I think I was misdiagnosed because I was female, I didn't have a broken bone and I was 'imagining my symptoms'," she said.

"Also, I wasn't old enough. (At the time) it was characterised as being and 'end of life' type disease.

"I was just glad I was diagnosed. I was sick of going to doctors and being told it was all in my head."

Wendy had been so ill and fatigued she had had to stop working in her role with disabled children in the lead up to her diagnosis.

"I couldn't cope with the fact I couldn't give the students what they needed from me.

"I had teenage kids and they said 'Mum, you have to get an answer to this'."

"They knew something was wrong. They'd come home from school and I'd be asleep."

Wendy's prognosis was grim - her kidneys were shutting down rapidly and she was told that without treatment, she had only six months to live. Making the situation even more grim, was the fact that treatment options at the time were very limited.

She underwent an experimental treatment for six months, followed by another six months of treatment with a drug that had previously been used on leukaemia patients. This was followed by an autograft bone marrow transplant - a procedure which uses healthy stem cells from the patient's own body to replace diseased or damaged bone marrow.

By 2002 Wendy had no visible signs of myeloma in her blood counts - she still had to go back for six monthly, and eventually annual checkups.

She never felt well enough to go back to full time work, but in the ensuing years, she was able to regain some sort of a sense of normality. She got to watch her grandchildren grow up, ran a mother's group at her local church, started writing family histories and volunteered for the Office of the Public Advocate as a visitor for homes with adults living with disabilities. She also started attending art classes and took up painting acrylics.

Then in 2019, the cancer came back. Specialists suspected the cancer had returned following blood tests and a bone marrow biopsy confirmed the worst. Wendy was experiencing severe spinal pain at the time and a CT scan reveled numerous small fractures. Around six months later, a tumour was discovered in the soft palate of her mouth and another was found just a paper's width from her spinal cord. A number of pin hole cracks in bones were also discovered.

The tumour in Wendy's mouth was removed, while the site of the tumour in her mouth, the spinal tumour and a pin hole crack on her pelvis were treated with radiotherapy.

She said she wanted to be an ambassador for Myeloma Awareness Month to encourage others who might have the condition to get treatment as soon as possible.

"Early diagnosis and early treatment is likely to get you a better result.

"It's not going to cure it - at least not yet, but it's going to make life easier to live and could prevent fractures."

Wendy said it was easy to attribute the earliest symptoms of the disease such as bone pain to chronic injuries, exacerbated by lifestyle or work factors.

"The fatigue is different to the fatigue you get when you play sport. You sit down and suddenly realise you've been asleep.

"You sit at a meeting and when you come to, the meeting is nearly finished and you've missed half an hour."

95 per cent of people living with myeloma are aged 50 years and over. Diagnosis and mortality rates are rising with 1,074 Australians losing their life to the blood cancer each year - this number is set to almost triple by 2035. There's no cure for myeloma and patients face a 50 per cent chance of survival.

Four out of five Australians are not confident in recognising the main signs and symptoms of the disease - which include bones which are more prone to breaking, bone pain, persistent tiredness, dizziness, anaemia, frequent or repeated infections, increased or unexplained bleeding or bruising, kidney damage and a high level of calcium in the blood.

If you or a loved one are impacted by myeloma and need support, call the Leukaemia Foundation on 1800-620-420. For more information click HERE