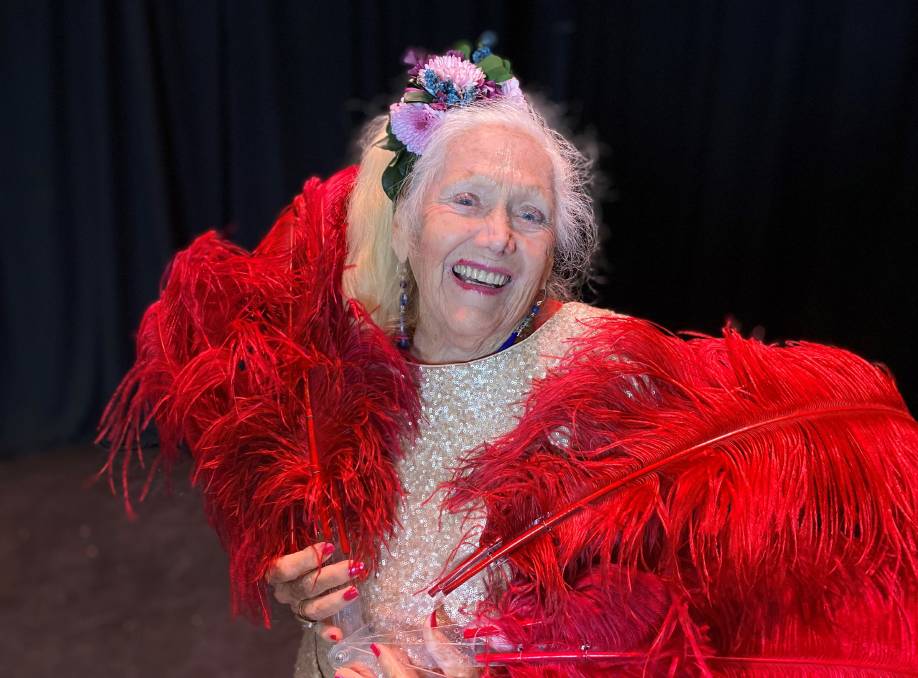 Nimbin local Jazmin Theadora opens up in 'Fearless Films' about the struggle to be accepted as she is.

Despite her love of colour, Jazmin Theadora's world was dark.

Taunted and tortured for being 'different' she entered her teenage years friendless and frightened - a deer in the headlights on a lonely road in 1950s Sydney.

In her darkest days, Jazmin tried to end her life but ultimately her courage prevailed and she battled through the blackness to create a life full of colour, connection and deep satisfaction.

Beaten, jailed, jilted but never defeated, Jazmin, 83, wants the world to know she made it 'over the rainbow'.

The story of this trailblazing transgender tarot card reader is one of courage and tenacity and it's being told as part of the Fearless Films series documenting five seniors who are challenging conventions, smashing stereotypes and making bold contributions to society.

"I was called a poofter, I was pushed off a moving train, I was beaten by police and thrown into a men's prison," says Jazmin of her late teens and early twenties when she began to explore who she was.

"When I was 17 I was so desperate to be myself. I didn't know anything about makeup or things like that. I just bought some second-hand clothes and lived with a Queen Elizabeth scarf tied around my neck and a little lipstick.

"In those days it was illegal for men to have long hair and I was jailed for two weeks. Can you imagine it being illegal to be yourself?"

It's a question she asks filmmaker Nicole Sullivan who joined the Fearless Films project to connect with the older generation and highlight that 'age is just a number'.

Nicole said Jazmin's story was one of bravery and resilience and she hopes it will inspire others to engage with seniors, listen to their story and find out who they are.

"It's something so simple yet the outcome can be profound," she said. "The wisdom that someone like Jazmin can impart is scarce, and it's fleeting.

"We take it for granted and think that insights into the past and accounts of what life was like in bygone eras will always be around but that's only the case if we capture the stories and pass on the learnings.

"That's what makes the Fearless Films project so important. Yes, it's giving a voice to under-represented groups and it's breaking down stereotypes but it's also documenting lives, lessons and lore that may otherwise be lost."

In her mid-twenties, Jazmin and her friends were on the fringes of 1960s Sydney - the tassels that adorned the edges of society, inhabiting the coffee shops and clubs of Kings Cross. They were the drag queens, the cross-dressers, the stripers, the artists, the bohemians and the misfits.

Jazmin's unconventional life taught her many lessons, most of them the hard way, but the one she cherishes most is learning to live, not just exist.

"Staying true to yourself, being exactly who you were meant to be, is the most important thing in life," she said. "Once I made the decision to live life my way I never looked back."

At 26, Jazmin completely embraced her femininity and decided to live as a woman full-time. She became a stripper and in six weeks she was the star of the show. She travelled the world performing, dancing and acting before returning to Australia and eventually settling in Stoney Shute, in northern NSW.

Even in her eighties Jazmin is still a star and she says the show must go on. In recent years she's continued acting, writing, podcasting and tarot card reading.

And if that wasn't enough, Jazmin is documenting her extraordinary life in her autobiography, I Made It Over The Rainbow.

Nicole said while the Fearless Film she created about Jazmin can't possibly to justice to the incredible woman she is, she hopes it helps keep her legacy alive.

"A legacy as important as Jazmin's deserves to last forever and I hope this film plays a role in keeping her story, her vibrancy and her spirit alive to be enjoyed by generations to come."

Fearless Season 3 takes viewers on a journey on the Feros Care website.

The films showcase the value of our seniors and broaden the representation of our elderly on screen.

Not-for-profit organisations Feros Care and Screenworks partnered for the project after the success of the first two seasons, which shared the captivating stories of nine seniors aged 75 and older, and six Australians living with disability.

"We want to give a voice to those often under-represented in our media and on our screens, and a platform to honour their worth, their experience and their ongoing contribution that enriches the lives of those around them," she said.

"The five fearless seniors featured in season three embody Feros Care's 'grow bold' ethos and demonstrate to others that age should not be a barrier to pursuing your passion.

"Each film explores their unrelenting zest for life and infectious enthusiasm for their craft - be it books, tarot cards or campdrafting.

"Feros Care has a proud history of challenging the status quo and breaking down barriers to foster inclusion and Fearless Season 3 continues that tradition."