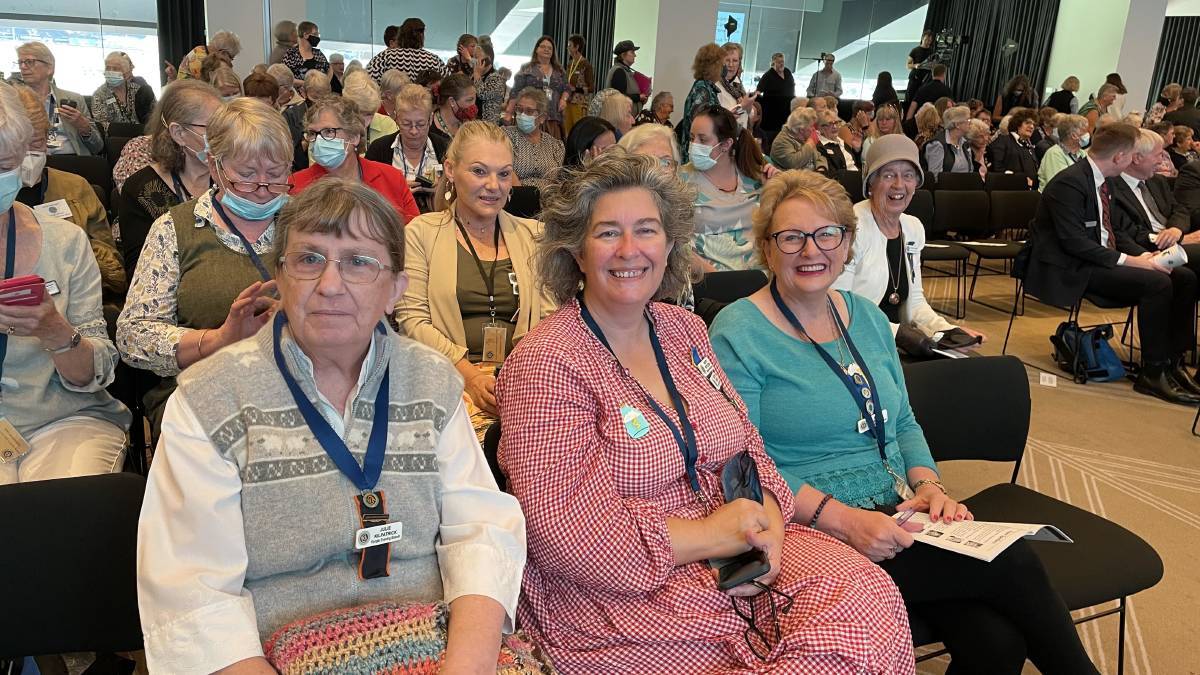 Members of the Kyogle branch get ready for the opening of the CWA's 100th birthday celebration conference at Royal Randwick in Sydney. Photo by John Ellicott. Julie Kilpatrick, the grand-daughter of one of the CWA founders Florence Laver is sitting bottom left.

All roads lead to Randwick for CWA's big centenary week.

The largest conference held so far kicked off at Royal Randwick on Monday, May 2, for the Country Women's Association's 100th year anniversary.

About 1000 CWA delegates and observers filled the ballroom at Randwick with members arriving from all over NSW.

Downstairs, various branches had their own stands celebrating their history while old friends shared a tea or coffee and chat before the conference.

The Governor of NSW Margaret Beazley opened the conference, many delegates wearing masks, a testament to the long difficult time leading up to the 2022 conference that saw the 2020 conference cancelled and last year's Bega conference restricted in its breadth.

Among those attending was the granddaughter of one of the CWA's founders Julie Kilpatrick, from the Kyogle branch, whose grandmother Florence Laver, of Crookwell, helped establish the CWA back in 1922. 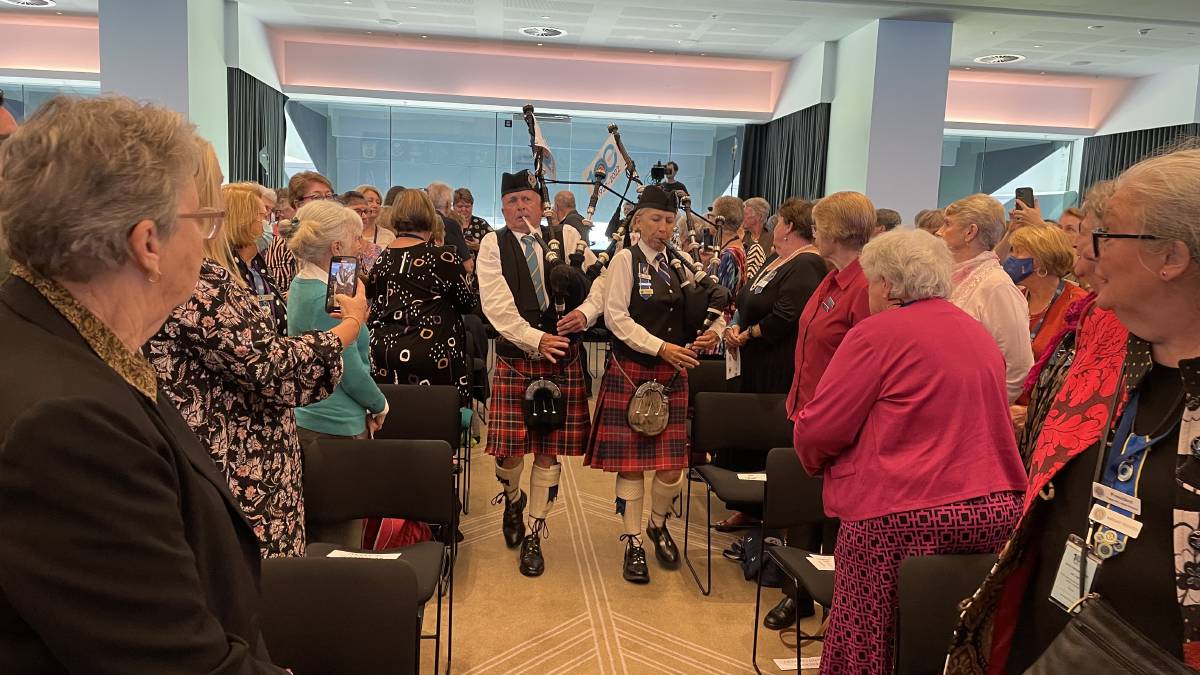 The conference starts with some bagpipes.

The official party arrives on stage.

Unfortunately the guest speaker, NSW Women's Minister Bronnie Taylor, was unable to attend due to a fall on the weekend.

NSW Premier Dominic Perrottet sent a video message congratulating the CWA on its 100 years and said it would always have a seat at the table of government and had helped improve conditions for women and children in rural Australia and NSW.

"We know when you are involved we have better outcomes," Mr Perrottet said.

"Thank you for everything that you do."

CWA President Stephanie Stanhope shed some tears as she flagged this was her last conference as President and spoke highly of her predecessors.

She had to wipe away tears and said it was "lucky I don't wear make-up". A letter from Prime Minister Scott Morrison was displayed on the screen and Mrs Stanhope said she was happy he wrote to the CWA. "He reiterates what we do .. I guess I better watch what I say," she said.

Governor Beazley, the CWA patron, then addressed the conference, telling the delegates "you are 100 years old and ready to dance."

Mrs Beazley said the wife of the 1922 NSW Governor, Dame Margaret Davidson was the first patron of the CWA and a firebrand for women's causes, as was the CWA.

She applauded the theme of the 100 year conference, "embracing and celebrating diversity".

She said the CWA had embraced diversity by allowing more city membership and had faced this issue "head on".

"Celebrating diversity in your 100th year is a wonderful thing. In many ways diversity has come to you. Acknowledging diversity in itself is not a panacea but inclusivity is all important."

She said the conference will throw up some thorny issues - "but always remember you are an organisation of doers".

"You have a lived experience of droughts, floods, the pandemic and the mice plague. The CWA continues to support causes of all kinds. Your recent donation of $500,000 to the disaster relief fund is simply tremendous, congratulations. 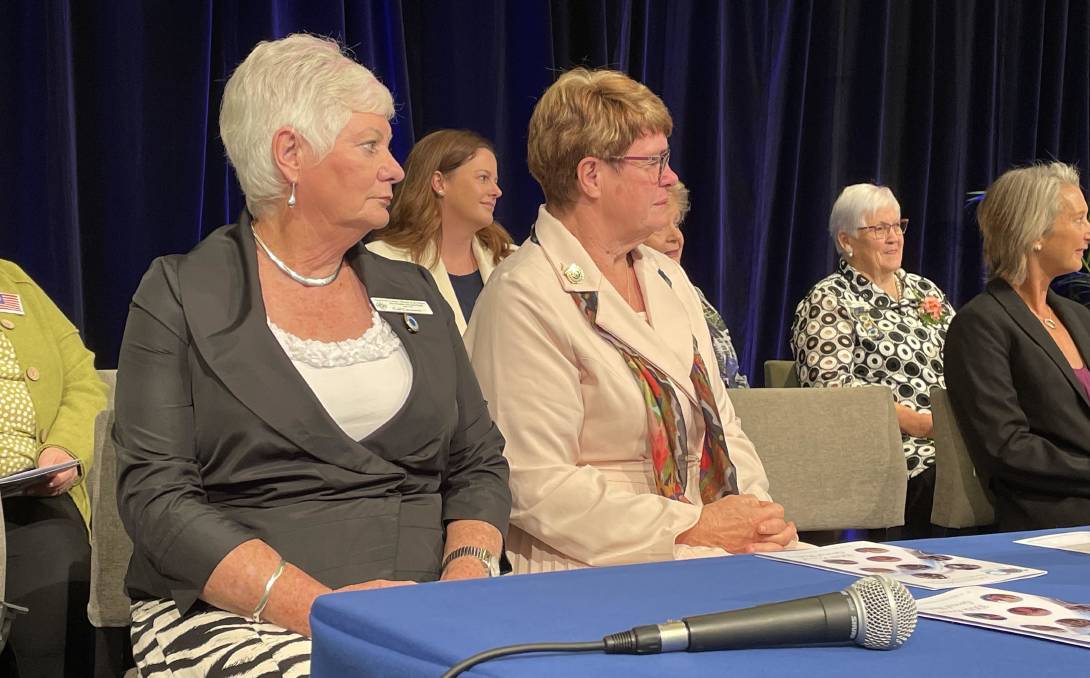 "You are the largest women's organisation in Australia, and you are such wonderful citizens of this fortunate nation of ours. Good luck with your 28 motions."

Adapting to change was vital, as the Olympic movement had shown. Choice not chance determines our destiny, she said.

She said she most admired the rules and regulations that supported the CWA, and "let us reinforce the values we have". "We all have an incredible support network for each other."

It had been an emotional time as president for her sharing her personal experiences with CWA members involving domestic violence, dealing with suicide and surviving bushfires (Mrs Stanhope lost her home in the Bega fires).

She said it was important the CWA focus on personal achievement of its members, and practise love and compassion and show service.