A sword, scabbard and leather-bound 'swagger stick' are among items Deirdre Bean has given life on canvas.

A sword used by Australian Light Horse battalions in World War I is the subject of an award-winning painting in the 2022 Gallipoli Art Prize.

Titled Along the ride to Damascus, the oil paint on canvas artwork, by Deirdre Bean of Newcastle, features a sword, scabbard and leather-bound 'swagger stick' that belong to a private collector, who loaned the items to the artist so she could draw and then paint them from life. 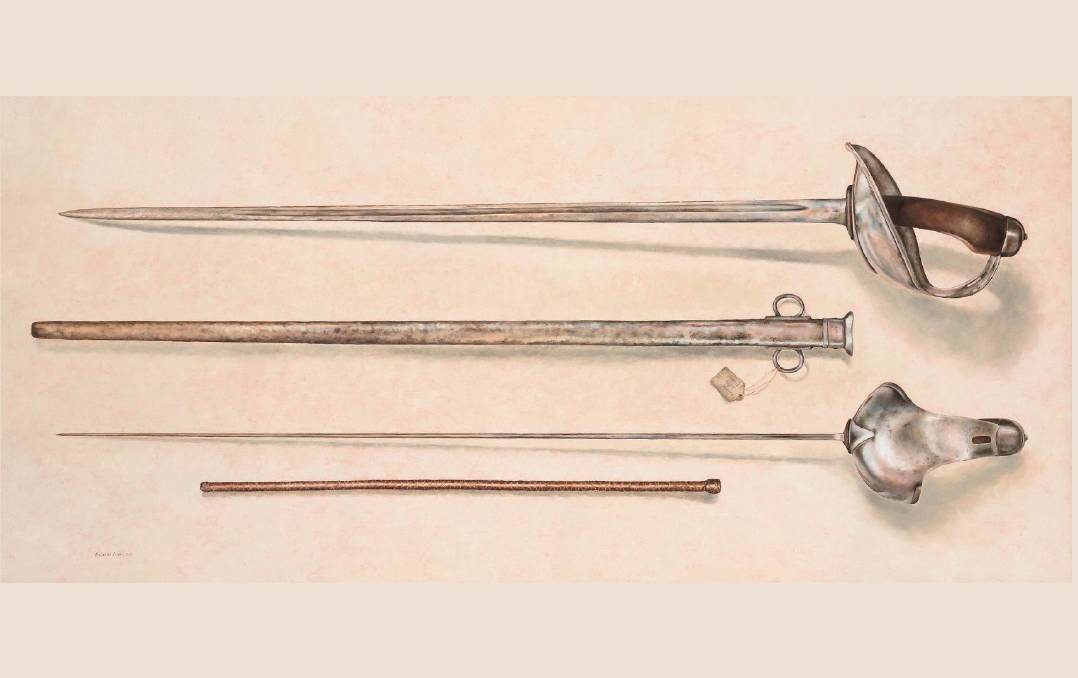 'Along the ride to Damascus' by Deirdre Bean. Photo supplied

In her artist statement, Deirdre said in 1918, following the battle at Beersheba, allied forces including Australian Light Horse battalions advanced towards Damascus, the last stronghold of the Turks. At this time, the Light Horse, at their request, were issued with swords requiring weeks of intensive cavalry training adding to their existing impressive skills.

Historians had written of the battle at Quneitra on September 28 where The Australian Light Horse, with swords drawn, attacked the Circassion cavalry, killing, wounding and taking prisoners. Two days later, the Light Horse charged the Ottomans 'with the sword', causing the terrified enemy to turn and run.

"It has been my art practice in recent years to rediscover items such as these: precious, meaningful items that are locked away and in danger of being forgotten," she said.

"My ambition is to 'relove' them by bringing them briefly into the light and, with careful handling, reimagine them in paint on canvas. This sword now has a new alternative life. The stories it evokes are retold, conversations are had, and information shared. We remember, lest we forget."

Deirdre is a revered botanical artist with a PhD in Natural History Illustration, focusing on mangrove species. Her works are included in the public collections The Royal Botanical Gardens in London and Sydney as well as Parliament House in Canberra. Her awards include one Gold and two Silver-Gilt Medals from the Royal Horticultural Society, London and her work 'Major Smith's Petrichor' was Highly Commended in the 2020 Gallipoli Art Prize.

Her first artist trip to Gallipoli was in 2013 which prompted her to begin painting weaponry and other battlefield relics. In 2017 she was one of twelve artists included in an art expedition to the WWI battlefields in France and Belgium, to explore Australian history and memories of the Great War.

Receiving the Highly Commended Prize was Geoff Harvey for his artwork Lest We Forget.

The Gallipoli Art Prize invites artists to respond to the broad themes of loyalty, respect, love of country, courage and comradeship as expressed in the Gallipoli Club's creed.