Political cartoonist Fiona Katauskas describes herself as a cheery person, but her job relies on maintaining the rage. 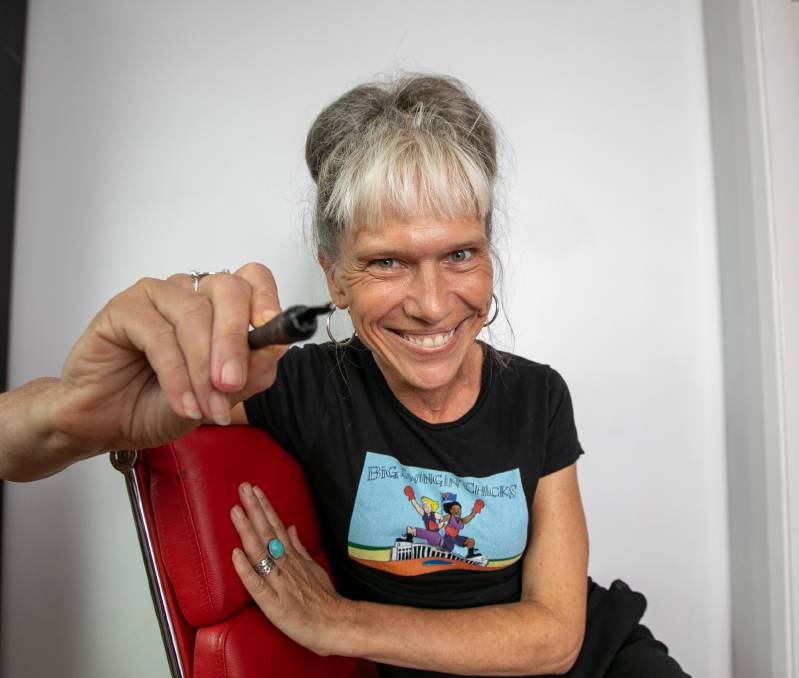 Political cartoonist Fiona Katauskas describes herself as a cheery person, but her job relies on maintaining the rage.

FOR Fiona Katauskas, a federal election campaign is the equivalent of a big rock'n'roll festival, except instead of music all the time, it's politics. Lots of politics. So much politics the Petersham resident has to watch out she doesn't overdose.

"I'm finding I've got to pace myself as well, because this is six weeks," she told ACM last week. "This isn't a three- or a four-week campaign. And it's going to get dirty. It's already feeling dirty!

"It's going to be a long, exhausting ride - and I also think that is Morrison's strategy in having a longer campaign; he thinks it will give him an advantage and he can grind Anthony Albanese down." This year's federal election campaign is Katauskas's ninth as a political cartoonist, after she took up the pen and paintbrush to give Australia's politicians what-for in 1997, one year into John Howard's 11-year prime ministership. Her cartoons have since appeared in top-tier publications across the nation, and for this campaign, she is cartooning for ACM, the publisher of this story. 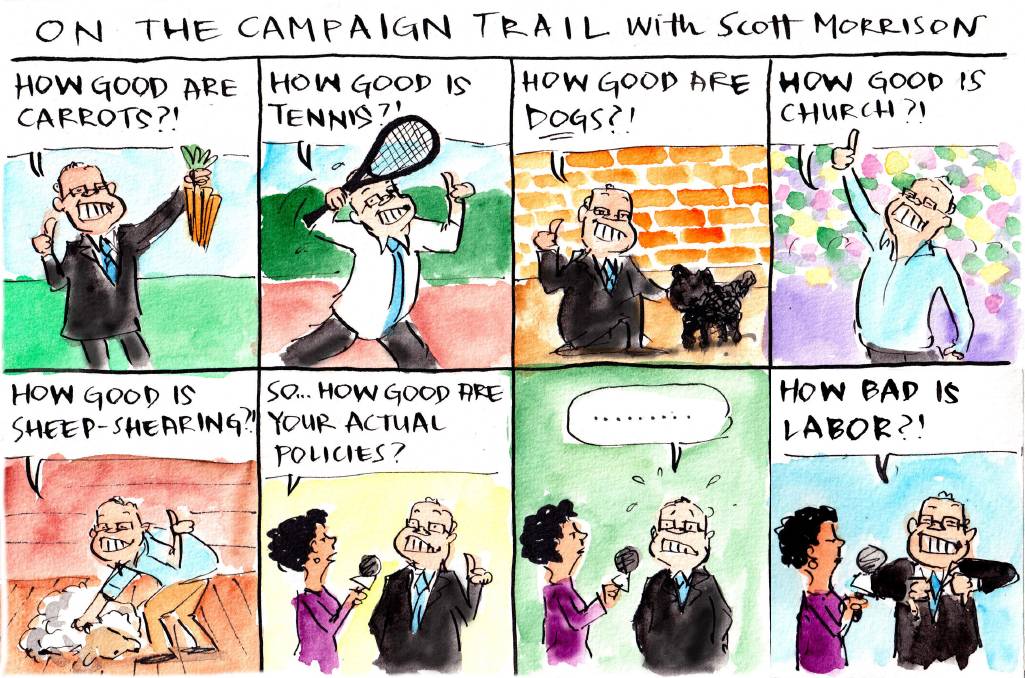 Katauskas is one of only three women political cartoonists in Australia right now - the other two are Cathy Wilcox and Megan Herbert, whose work appears in The Sydney Morning Herald. With the retreat of print media and new generations who are digital-only news consumers, political cartooning is an increasingly niche area - one of the most exclusive job clubs in Australia with the number of practitioners in the double figures.

It is a job that Katauskas adores. "Bucketloads of fun," is how she describes it, and "a delightful privilege of a job to have". On her website she says: "Cartoonists are lucky folk indeed - able to take all their experiences, beliefs, bile and passion, wrap them up in a metaphor and get inky fingers in the process."

She does concede, however, that cynicism has to be kept at bay. "Part of the challenge is trying not to be consumed by cynicism. That is the real danger," she says.

"Part of how I keep fresh feelings about cartooning is by maintaining a simmering rage about the state of the world - I have to care about things, otherwise I can't do cartoons about things I don't care about.

"I am very interested in a whole lot of social justice issues that I think about a lot, and have ever since I was a kid. I'm very passionate about public education, refugees, Indigenous justice, climate change ...

"I am a cheery person, but inside I have a boiling rage." Katauskas says she has never found a prime minister boring to draw.

She loved the colour that Julia Gillard brought to the cartooning gig, in both her flame red hair and her clothing, which was a welcome contrast to the blokes' standard-issue dark suits.

The shape of Kevin Rudd's head - "almost completely round" - made him fun to draw, and Tony Abbott was "tremendously fun", thanks to his notorious red Speedos. "Often there will be something that defines a caricature of a politician, some element of dress, or some accessory - with Morrison, a lot of cartoonists sum up his character with the Hawaiian shirt, which symbolises 'I don't hold a hose'. 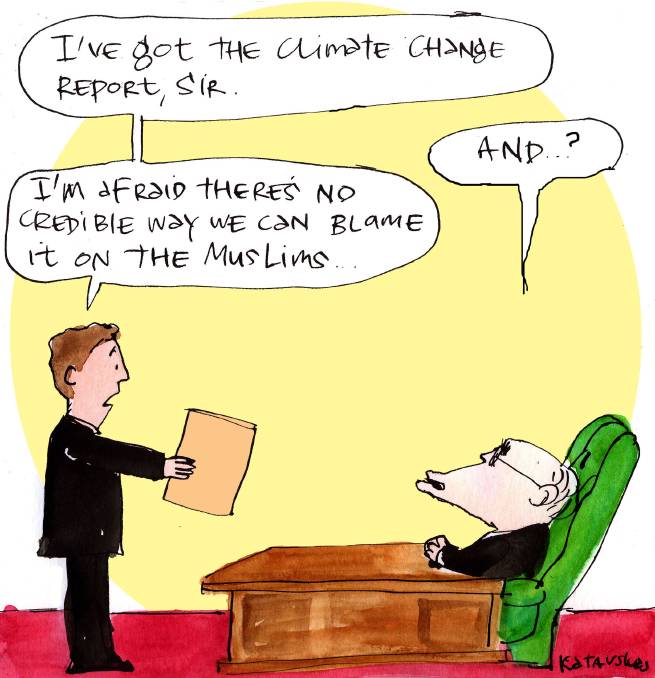 "With Tony Abbott, he himself emerged from the surf for a press conference in red Speedos. It wasn't like someone went and snapped him at the beach; he put himself in that position and because the metaphor works - he is literally and figuratively hairy chested - it just stuck, and everyone drew him constantly in Speedos."

No one really knew what to do with Malcolm Turnbull, she says, apart from the odd cigar and top hat to symbolise his wealth.

"He never had anything specific to hang on him. Boring is the wrong word - every person is interesting to draw in the context of what is going on; it's not so much the person being boring as the events around them." When it comes to drawing Scott Morrison, his "distinctive grin" is what Katauskas and her fellow cartoonists home in on, she says. "He does sort of have a resting smirk face," she says.

"John Howard was defiant, so that bottom lip stuck out in defiance, that was part of his character - and I think over the years we have come to know Morrison as PM, cartoonists have really picked up on that look on his face - he juts out his chin a bit, his eyes lose focus, he does this grin ... and that is where he goes, 'I'll just pretend I didn't hear that question'; or 'I'll say that's bubble talk or Canberra gossip'; or 'I will try and diminish it in some way'.

She is still getting to grips with drawing the Opposition Leader - and her own local federal MP - Anthony Albanese. "We are all getting used to him. Because he has been a small target, there hasn't been a lot of cartoons about him.

"For me, the trick is he has got a little vertical crease in his forehead, inbetween his eyebrows, so that is how I start my drawing. The glasses are a good hook too; the shape is distinctive so you can work around those." Blandly good looking people - like Industry, Energy and Emissions Minister Angus Taylor - are "really, really hard" to caricature. For some unfathomable reason, she finds National Party leader Barnaby Joyce difficult, "and he just should not be - he should be the easiest person to draw - but he is very fun to paint because you just make a lovely, particular shade of red, which should be called Barnaby puce."

The former immigration and now defence minister Peter Dutton is Katauskas's favourite to draw, "even though he is my least favourite politician. He has got a very drawable head - you can capture it quite effectively in a few simple lines, especially the heaviness of the bottom lip is the key with him.

"As they have with ministers of immigration before him, a lot of cartoonists paint him with blue skin," because the portfolio responsible for Australia's hard-line immigration detention policies "has rotted his soul".

The view from here Unfortunately, says Katauskas, satire is never as powerful as satirists like to think. "The legendary comedian Peter Cook spoke - tongue in cheek - of "the satirical Berlin cabarets of the '30s, which did so much to stop the rise of Hitler and prevent the Second World War'.

"Still, I think cartoons can shine a light on hypocrisy and show how power works in a way that engages the reader that an editorial on the same subject wouldn't. Cartoons, to my mind anyway, shouldn't punch down but should focus on powerful people and institutions... and hopefully make people laugh as well." Katauskas creates her cartoons in a small attic studio in her Petersham home, her worktable positioned at a window with views across local rooftops. She and husband Tim O'Connor, the Director of Campaigns at Amnesty International, raised their two teenage sons in the inner west, one of whom is still at Dulwich Hill High School, and neither of whom are artistic like their mum, she says, although they are very "cartoon literate".

David Rowe of the Australian Financial Review and Katauskas are the only remaining Australian cartoonists still drawing by hand, "the last non-digital people".

"I draw my cartoon as a pencil sketch on paper, then I draw in ink with an old-fashioned nib pen that I dip in a pot of ink - it is really, really, really old school," Katauskas explains.

She then dries the ink with her hairdryer before painting the cartoon in watercolours, and deploying the hair dryer once again: "I never dry my hair with it, but it is one of my most well-used appliances. "It's incredibly laborious and messy and time-consuming doing it like I do but the feeling of the grip of the nib on some nice watercolour paper, I just love it. I like the humanness of ink and paper."

Like many commentators, she believes this federal election is Labor's to lose, "and to be honest, I kind of think they might lose it," she says. "I have absolutely no basis for this whatsoever ... I am just mainlining too much political information. I am snorting and whacking it in my veins, I'm chewing it down, I'm soaking in it and guzzling it - which is the affliction of the political junkie that I am."