The Battle of Amiens lasted only three days, but it was a turning point on the Western Front that helped end the First World War. 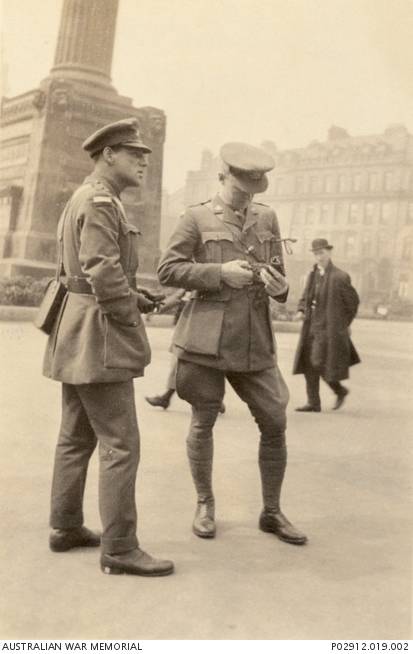 The Battle of Amiens lasted only three days, but it was a turning point on the Western Front that helped end the First World War. Daniel Aarons, a captain in the 16th Battalion, wrote an account of the battle to his sister. His letters were written in the trenches in France and describe the offensive of August 8, 1918.

The British, Australian, New Zealand and Canadian troops under Sir Henry Rawlinson and French troops under General Marie-Eugène Debeney launched a surprise offensive against a salient - a bulge in the German lines - near the city of Amiens on the old Somme battlefield.

The attack was a complete success. With a force of 75,000 men, more than 500 tanks and nearly 2000 planes, allied troops advanced 12 kilometres in one day, inflicting 27,000 casualties on the Germans and capturing 450 artillery pieces.

Aarons wrote, "The big stunt opened a little after 4am, being the second anniversary of our Pozieres affair. There was a very dense fog which the troops fought through, all helping to catch the enemy unawares.

"The attack in the main was made by the Australians and Canadians although the British and French were on our flanks. There were also some Americans engaged just across the river on our left. From what I know at the moment, it was necessary for the Americans to be called in to help our own troops assist the Tommies who had struck a pretty bad patch."

He suffered gunshot wounds to his right arm, legs and back and was hospitalised in London, re-joining his unit in December 1917.

"The show started on a 20-mile front and finished on a 40-mile front, although it has developed on even a much bigger scale.

"Many of the Fritz forward guns had been captured, but I saw quite a few instances of very brave action on the part of the Fritz guns, where they stuck to them to the last ditch and fired point-blank on our troops. The same thing was done by their machine guns ...

"We took our objective, rushing across open and dangerous country, but I must say that the boys exercised considerable craft and common sense in their movement. Altogether I think we captured about 200 Huns and many machine guns, whilst we killed a good many.

"The most inspiring thing I saw on the opening day was our artillery galloping into action, unhitching the guns and the drivers galloping the horses away again and almost within a few seconds after, the guns were in action."

While the usefulness of the cavalry as an offensive unit had diminished as trench warfare made charges suicidal, cavalry was successfully deployed at the Battle of Amiens, along with tanks and aeroplanes.

"I am also informed that the Australian Light Horse captured a train with 1000 Huns aboard. There seemed to be hundreds of tanks engaged in the stunt, and they did some wonderful work.

"Aeroplanes were in the sky in hundreds. At one try we counted over 70 at the one time. During the stunt, aeroplanes dropped boxes of ammunition attached to parachutes."

As well as suffering heavy casualties and lost ground, upwards of 12,000 German soldiers surrendered, and many gun batteries fell intact into allied hands.

Although the fighting was short-lived, the battle convinced many in German high command that victory was unattainable. By August 17, Captain Aarons was at the old German lines a few hundred yards from a former German Field hospital.

"The hospital was equipped with very advanced ideas such as the use of crinkled paper bandages, pillow-slips, sheets and so on. Paper was used for making mattresses and sandbags, as well as straps for the harness of horses and packs.

"We have definitely assumed the offensive, but the regrettable part is that we are now only retaking positions that were previously retaken in 1916/17 and which were lost during the March/April offensive. Wouldn't it have been wonderful if we could have started off from where we were a year ago."

After the war, Captain Aarons resumed his pre-war career with Vacuum Oil. He became general manager for NSW in the 1930s and retired in 1945. He died in 1983 at the age of 97.

Maria Purnell is a writer for the Australian War Memorial.