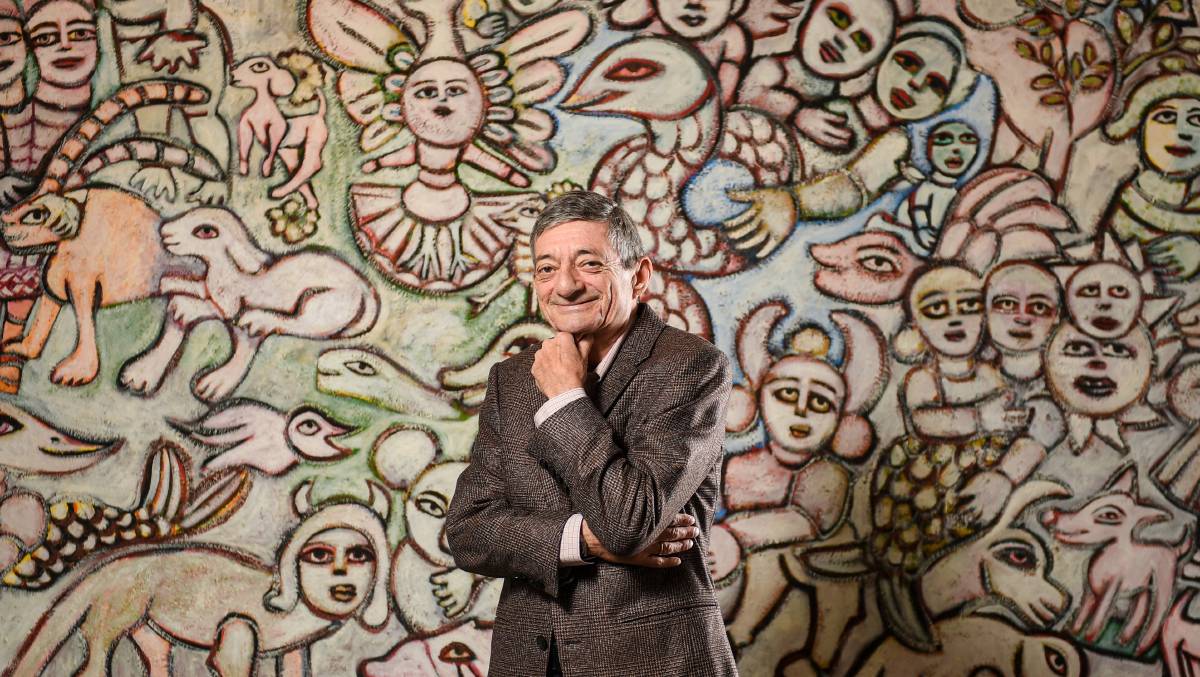 William Mora ... there's a profundity to her art that I think people often miss or that is overshadowed by her personality PHOTO Morgan Hancock

Artist and restaurateur Mirka Mora left her mark on Melbourne.

Artist and restaurateur Mirka Mora left her mark on Melbourne, with public murals and mosaics from St Kilda to the CBD, as well as helping lay the foundations of contemporary art in Australia. Now, her son, William, is curating a local tribute to his mother's legacy. JENNY DENTON reports

William Mora and his wife Anna Mortley have finally cleared the clutter from the Tanner St studio in the inner Melbourne suburb of Richmond, where his mother lived and worked for the last 18 years of her life and organised the space ready to open to the public.

"It's been a huge job, and we kept on discovering work," Mora says. "Mirka has left an amazing legacy of not just paintings, but also works on paper and dolls - all kinds of things."

A dense collection of canvases are shelved along one wall and thousands of works on paper stored in chests of drawers are still being sorted and organised.

Dolls, masks, brooches, paperweights and decorated ceramics are displayed on shelves and in cabinets around the space.

A freestanding bath Mora had gone to great trouble to have plumbed for his mother still stands as she left it, filled with a collection of dolls by a lushly colourful hand-painted window. 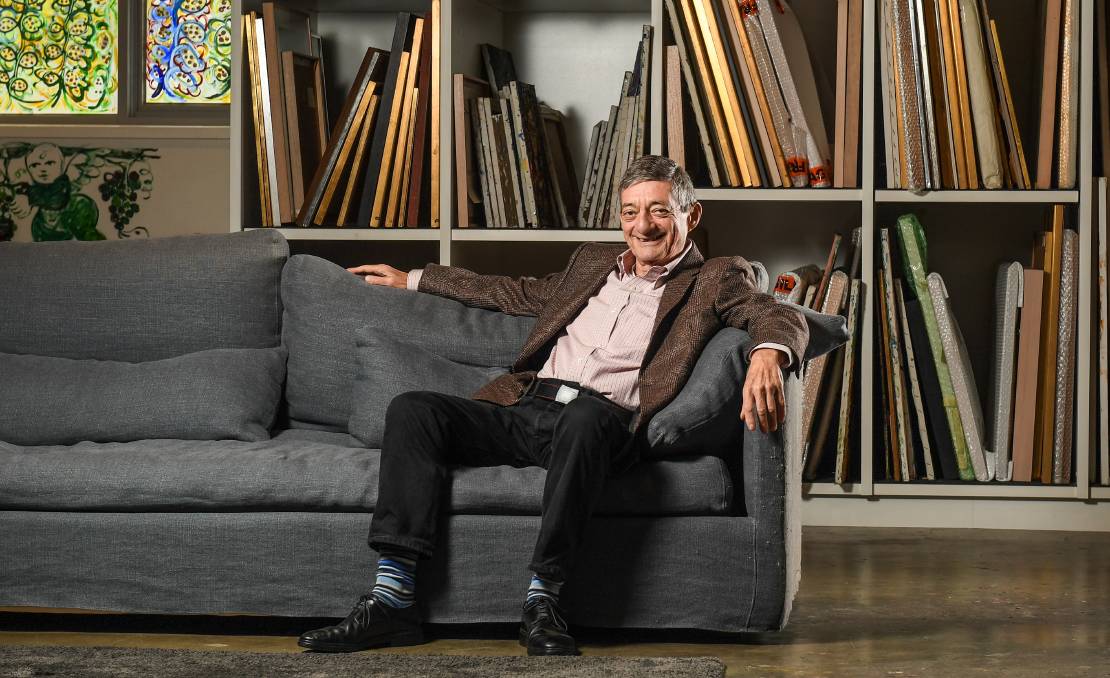 Lasting legacy . . William estimates his grandchildren will still be selling art from the estate in 90 years' time

Aside from the artwork itself, Mirka's sketchbooks, photos, catalogues and huge volumes of letters have been organised into drawers and folders.

The correspondence is "historic stuff", which comes from "every artist you can think of", Mora says, including John and Sunday Reed, John Perceval, Lady Mary Nolan and Marcel Marceau.

"People really wrote letters then. After a dinner party or a crazy weekend or whatever, they'd all write to each other," he says.

The idea for the studio is to open by appointment to anyone from school groups and local enthusiasts to researchers and private collectors.

"The feeling that she has created so much work in here really seems to translate when people just sit in here to being aware of a presence," Mora says.

With the huge volume of Mirka's output still being sorted and organised four years after her death, there is no shortage of work still available to buy.

In fact, Mora estimates his grandchildren will still be selling art from the estate in 90 years' time.

But it is his mother's reputation as a serious artist that most motivates the second-generation gallerist, who represented his mother over decades.

"There's a profundity to her art that I think people often miss or that is overshadowed by her personality," he says.

"I feel this real sense of duty in carrying on the legacy, and having her recognised, beyond her wild, wonderful vivacious personality, as one of what we call the Moderns."

Mora and Mortley have organised exhibitions of Mirka's work in several major shows since she passed away, including the 'Pas de Deux' exhibition at Heide Galleries, Mirka+ at the Jewish Museum in Melbourne, and 'Know My Name', celebrating 100 years of Australian women artists at the National Gallery in Canberra.

In November last year, dealers Deutscher and Hackett categorised her with Joy Hester and Yvonne Audette as Australian Modernists in an auction of 20 important women artists.

Mora and his first wife brought Mirka to Richmond, Victoria, in 2000, after deciding to consolidate their home and gallery and build a studio dwelling for her there.

"I don't think St Kilda's ever forgiven me for bringing Mirka to Richmond," Mora says. "But she loved it here. Swan Street became her new shopping strip.

"It was quite moving that after she passed, all the traders from Swan Street came to her State Memorial at the Palais."

Mora is proud of having been able to free his mother from the mundane side of life through the move, enabling her to focus on her art and lifestyle.

In her first 10 years in Tanner St, Mirka would often walk into town to visit her favourite bookshop, The Hill of Content, and have lunch at Florentino's. 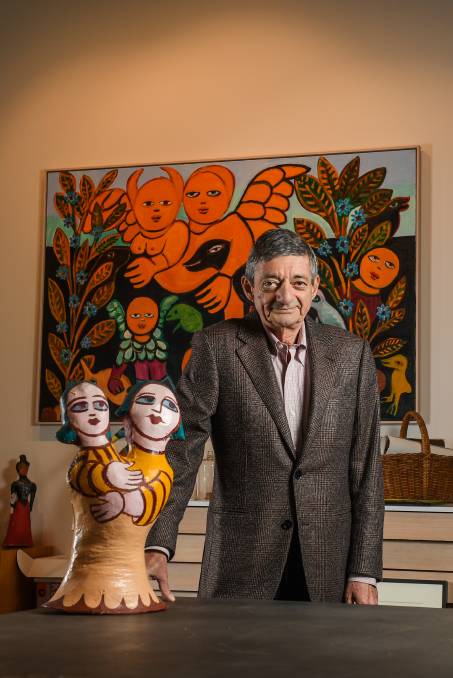 William Mora in his Richmond gallery, surrounded by his mother's artworks

"She loved lunching on her own and she'd take a little drawing book and sit at a table and start drawing," Mora says.

"And of course people would send her glasses of wine, restaurants would never let her pay - she had it all worked out!

"And she'd very often end up bringing someone back from the restaurant to see her art."

The amazing thing about Mirka, her son says, is that given the way she lived her life she was able to produce the amount of work that she did.

His mother's flamboyance and free spirit are now the stuff of legend.

Eccentric and exhibitionist, she used to "embarrass the bejesus" out of her three sons when they were young by "flashing her boobs", sabotaging the birthday cake or flicking chocolate mousse across the family restaurant at customers who looked too uptight.

"She was one of those French people who said, 'Champagne, you can have for breakfast'," Mora says.

"She loved shopping, she loved long lunches, she loved having cups of tea with people from all walks of life. I mean she'd invite homeless people from Swan Street back here for a cup of tea or she'd entertain so-and-so and so-and-so.

"And she always had time for people. It was quite amazing."

Mirka was a flirt, she had a love of cats - Pompom, one of her last pets, was said to have "grown roses" after he was buried in a pot plant when his kidneys gave way from overfeeding.

She was interested in symbolism and Jungian psychology and kept a dream diary.

"There were so many different levels to her as a person," Mora says.

There was also a serious side that saw her work every day and fed a voracious appetite for self-education and exacting research.

"When she did the mosaic mural at Flinders Street Station she went and bought every book on mosaics, particularly the mosaics in Venice," Mora says. "And insisted that she get the Murano glass mosaic tiles for it."

Mora remembers his mother always having books on any topic you could think of, and a vast library of around 5000 of them were among the possessions he and Mortley sent off to auction following her death in 2018. 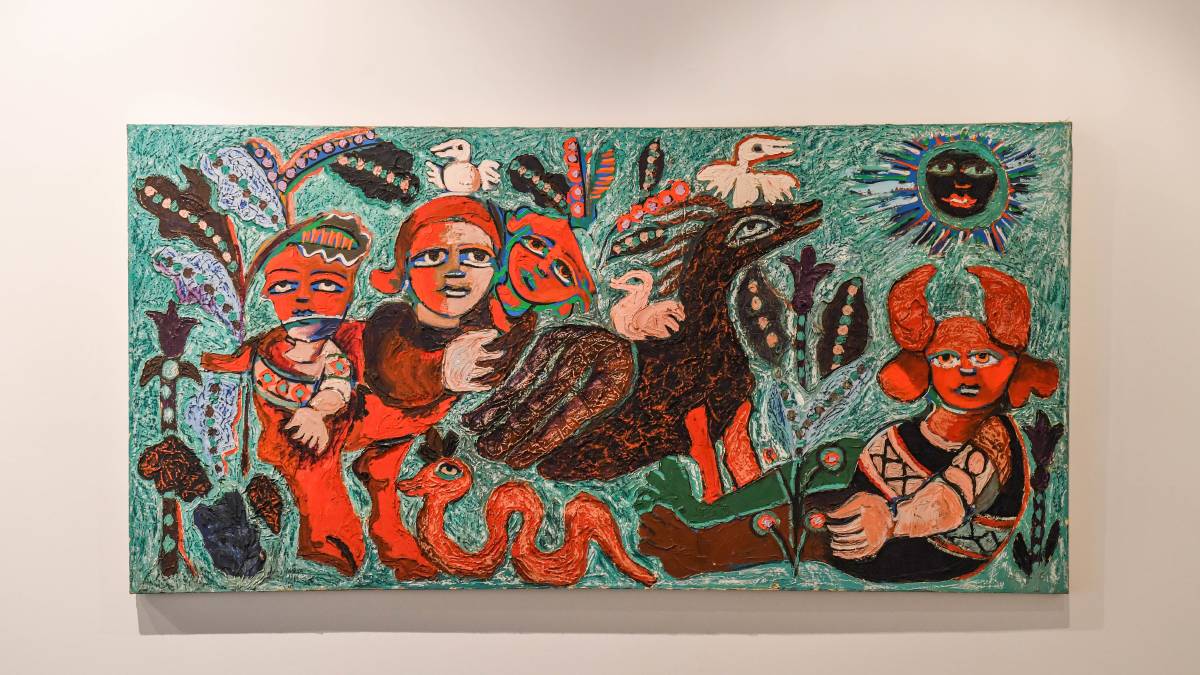 Mirka had published a book called 'Love and Clutter' celebrating the "extraordinary nature" and meaning of ordinary objects, and had amassed what the removalists estimated was the equivalent of three three-bedroom housefuls of them.

Mixed in amongst her artistic output and tools, was a huge collection of furniture, toys, tableware, cooking pots and other items.

"You had to sort of wend your way into the place sideways," Mora says, "and I'd always warn people, 'Be careful, you'll get wet oil paint on the back of your jacket'."

Just as the clearing of the room has created space to display her canvases, the passing of the beloved artist has cleared the air around her extraordinary, poignant output of doe-eyed people, watchful angels and colourful mythical creatures.

"The art is coming more and more into focus now, which for me, means a lot," says Mora, who believes it "probably ticks the boxes of romantic surrealism".

"People tell me that they get great pleasure and delight by living with Mirka's work and I think that's a really lovely aspect of it. People really cherish it," he says.

"It has a humanity that resonates with people.

"It's a total fantasy world, and there isn't enough fantasy in our lives these days."

From wartime to internment to Bohemian Melbourne

Born in Paris in 1928 to Jewish parents, Mirka Mora (nee Zelik) spent time in an internment camp and narrowly avoided being sent to Auschwitz after she was arrested with her mother and sisters in a 1942 roundup of Jewish families. The family spent the remainder of WWII hiding in the French countryside. 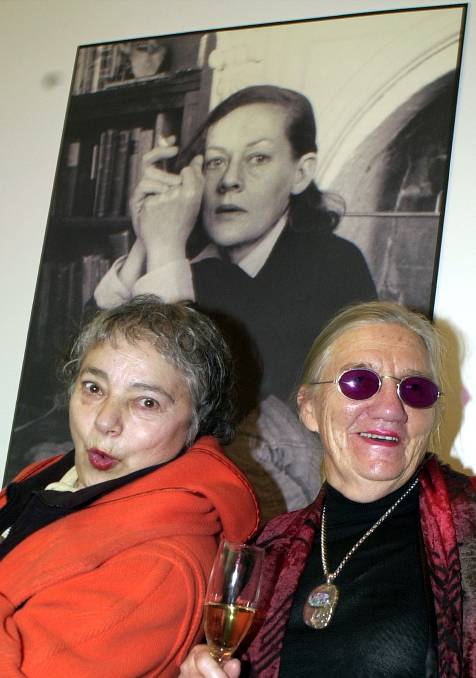 After meeting and marrying Georges Mora, who had been in the French underground, Mirka emigrated to Melbourne with him in 1951 and the couple moved into artist studios at 9 Collins Street, where they were drawn into Melbourne's bohemian art scene and became close friends with Heide Gallery founders John and Sunday Reed and others in their circle.

The Moras were instrumental in the revival of the Contemporary Art Society in Melbourne in 1953.

They also channelled their charisma and love of food and hospitality into restaurants, establishing Mirka Cafe, then French restaurant The Balzac (the first to have a 10pm alcohol licence in Victoria) followed by Tolarno Restaurant and Galleries in St Kilda.

"Having survived the Holocaust and that whole experience, she created this imaginary world in her art where she only saw the good in humanity and in her creatures," son and dealer William Mora says.

"Mirka always used to say to us as kids that animals have the same value as humans. And she constructed this world where they morph into one another". 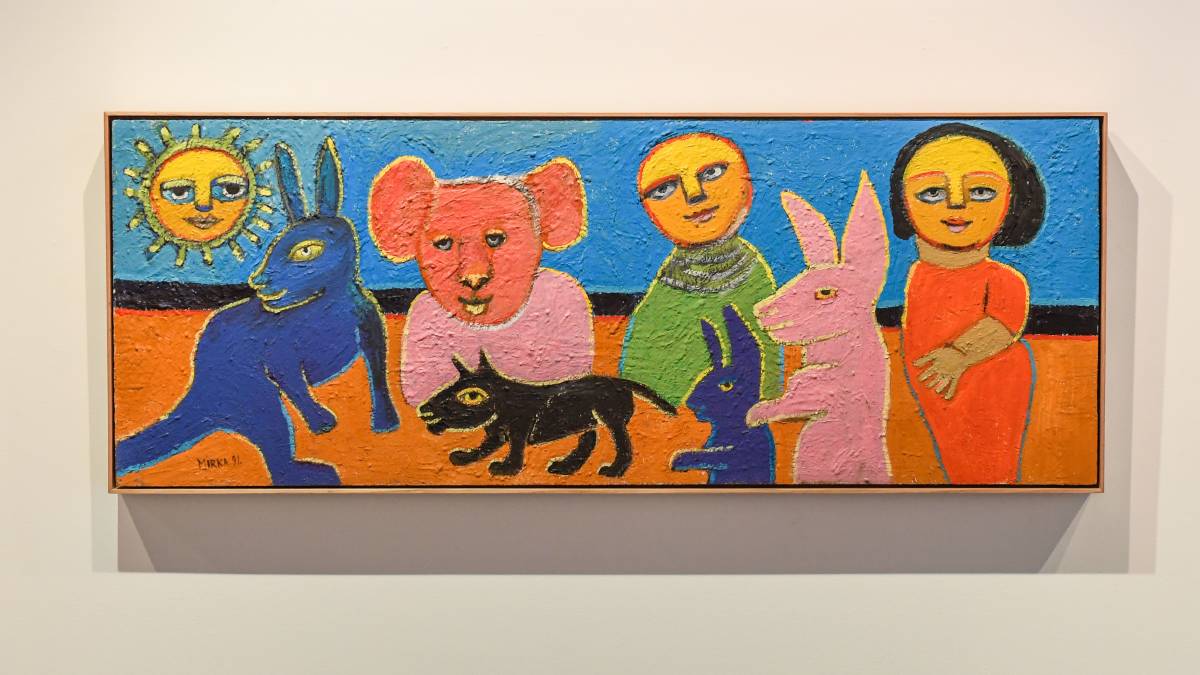 Her work celebrates humanity, life, love and the eternal wonder of the imagination, Mora says.

Moving into a surprising range of mediums, including mosaics, dolls and the design of the first Melbourne art tram in 1978, Mirka continued to devote herself to her art after separating from Georges in 1970.

Among her best known works are the Tolarno dining room murals, her Flinders St station mosaic and another mosaic at the foot of the St Kilda pier.

"Mirka worked every day of her life. She didn't sort of consider weekends or anything like that," Mora says.

"It gave her great joy to work."

Mirka, who had more than 30 solo exhibitions, died at home in Richmond, aged 90, in 2018, and was the first female artist to receive a state funeral. 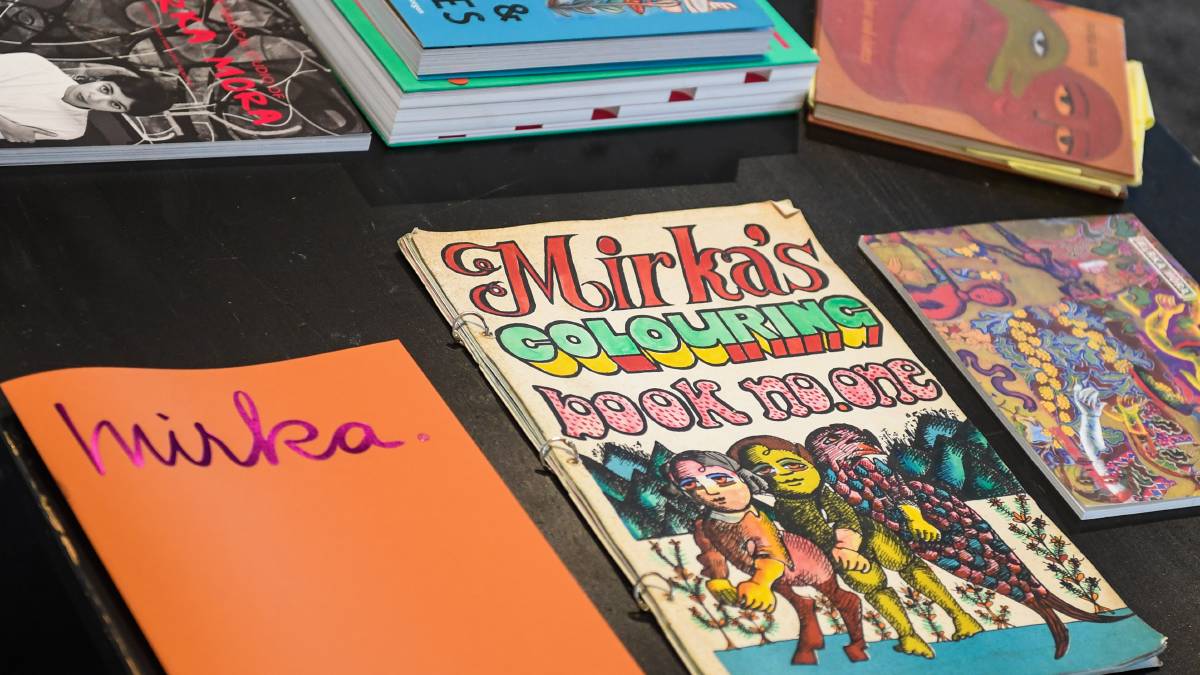