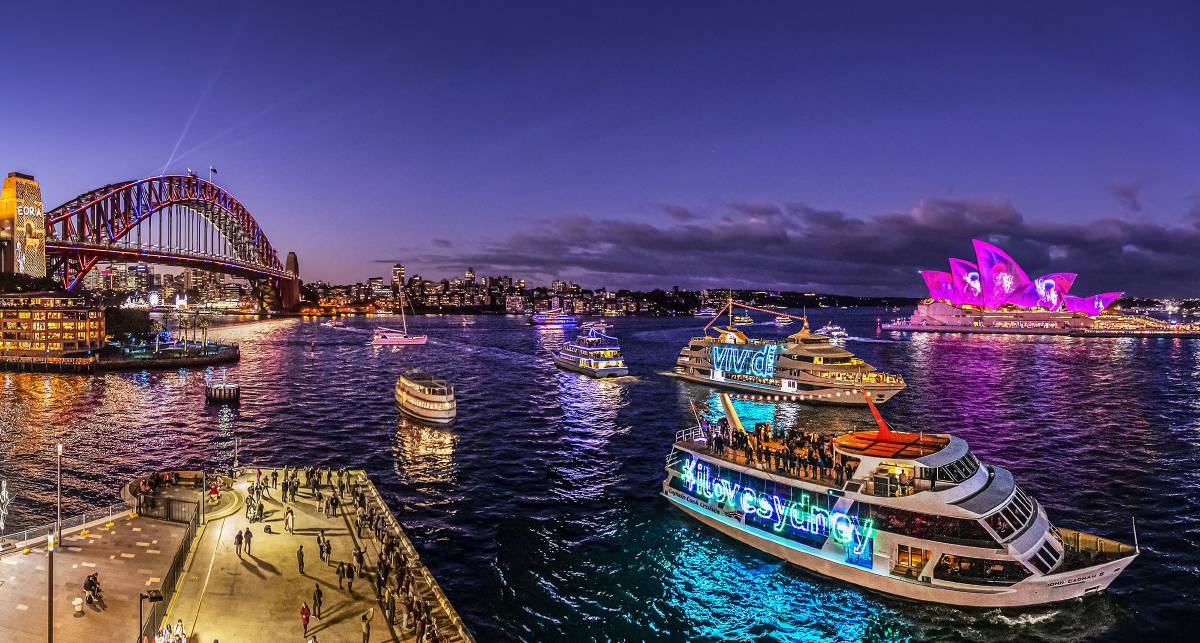 PREPARE TO BE DAZZLED: One of the most spectacular ways to enjoy VIVID is from the water.

VIVID Sydney is back with a bang.

The award-winning festival returns to the streets, parks, venues and buildings of Sydney from May 27-June 18 promising to be bigger and brighter than ever.

This year it will have the longest continuous Light Walk in Vivid Sydney history, trailing eight kilometres from the Opera House to Central Station and featuring 47 installations and projections along the way.

Daniel's inspiration comes from the birds that make their home in Sydney CBD parks and neighbourhood trees - from pretty rainbow lorikeets to cackling kookaburras and even the misunderstood ibis.

Prolific Sydney artist Ken Done's acclaimed Sydney-inspired artworks are synonymous with the metropolis that has been his muse for the past 80 years.

For this year, Done's work For Sydney With Love will burst to life in a joyful animation projected onto the facade of Customs House.

In collaboration with animators from digital storytelling group Spinifex, Done's playful scenes of Sydney Harbour will unfold across the facade, from boats sailing across the harbour to resplendent gardens, beach scenes and the city's most iconic places.

And once again, the Opera House will be aglow for the Lighting of the Sails.

The Goods Line Tunnel - a disused railway passage that began life in 1855 as part of the first freight railway line to the port at Darling Harbour - will reawaken with the largest-scale laser installation in Vivid Sydney's history, Convergence, by lighting and production design firm Mandylights.

After almost 40 years of disuse and darkness, the mesmerising space will lure visitors in as they follow bouncing rays of light into a fully immersive display.

It promises a spectacular confluence of colour, laser and smoke.

A great way to take in the lights is on the water.

Knowing this, Captain Cook Cruises has released its most exciting program of Vivid Light cruises to date.

Each year the company lights up its vessels and illuminates the official Vivid Sydney logo onboard flagship Sydney 2000.

New this year is the Vivid Cocktail Harbour Bar, which combines Sydney-inspired cocktails and an unrivalled view of light installations from the Opera House to Darling Harbour.

The most affordable and easiest way to the see the full canvas of Vivid Lights across multiple foreshore precincts is onboard a one-hour Vivid Lights Cruise.

Up to four cruises will depart nightly between 5.45pm to 8.30pm. These cruises are priced from $29-$39 per person, and when combined with the NSW Dine & Discover voucher guests can cruise from as little as $4.

Vivid Dinner prices start from $59 per person for a two-course 90-minute cruise from 5pm.

Other dinner options include the Vivid Gold Dinner cruise from $195 per person.

Gold guests enjoy six courses over three leisurely hours with the option to pair each course with premium Australian wines including the renowned Penfolds St Henri.

All Vivid Sydney cruises depart from Darling Harbour King St Wharf 1, adjacent to the Barangaroo light precinct and only a short stroll to Cockle Bay and the spectacular new Sydney Infinity liquid and light show.

A Circular Quay disembarkation is also available on selected cruises, should guests want a close-up view of the light installations at The Rocks and Walsh Bay.