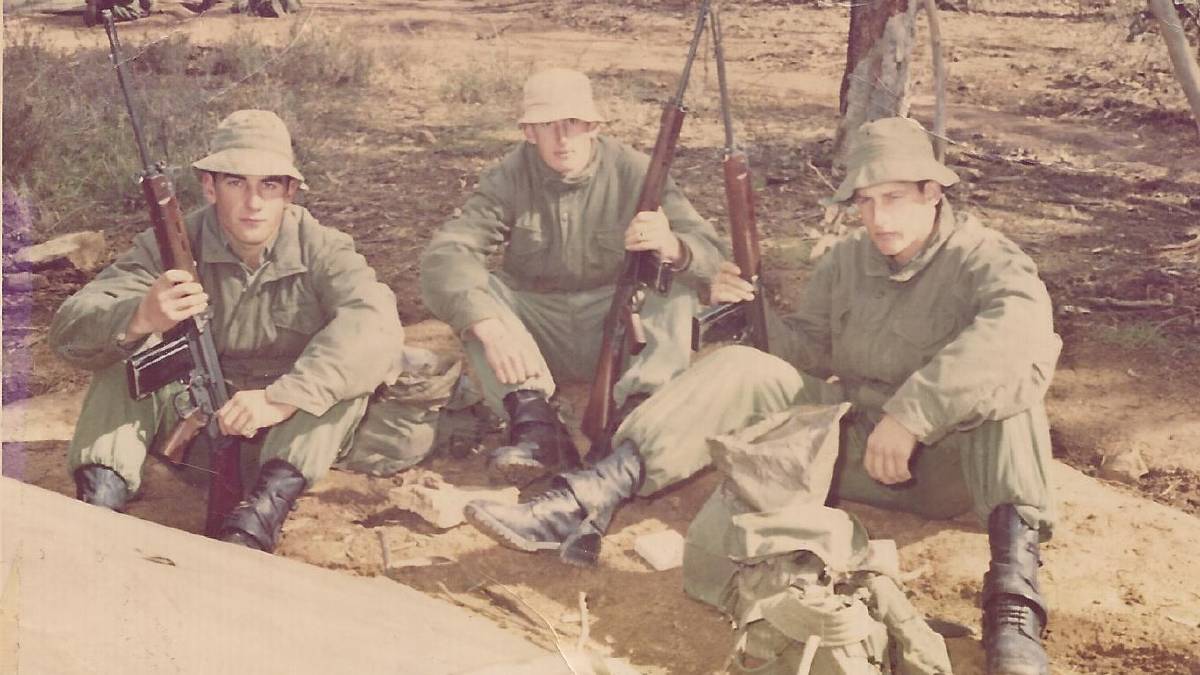 THEY SERVED TOO: Geoff Parkes, left. on a training exercise at Uranquinty, near Wagga Wagga, NSW, in 1971.

FIFTY years is not enough to erase the anger and sense of injustice felt by "forgotten" Nashos like Geoff Parkes.

Geoff is the president of Nasho Fair Go, a group established to campaign on behalf of the thousands of men who were called up to fight in Vietnam but never sent.

Its chief aim is to obtain Department of Veterans' Affairs Gold Health Cards for all national servicemen who served between 1965 and 1972.

The gold card is sent to those who fought in a designated war zone. It covers thefull range of health care services at the DVA's expense for the rest of their lives.

Geoff and other former conscripts receive DVA White Health Cards, which provide a pension of $6.40 a fortnight, mental health care and fewer services.

It is available to all who served, if only for a day.

Geoff, 71, who was conscripted in 1971, said the card's existence came almost as a surprise. He said he found out by accident. Many men like him were unaware they were even entitled to it.

With the youngest Nashos now 70, Geoff and his members are pushing for the expanded benefit no matter where they served.

He stresses that having been through hell, those sent to Vietnam deserve every cent they get. But they numbered just 15,300 - less than a quarter of the 63,375 men conscripted, under threat of jail, for 18 or 24 months.

"The army is not my beef. My beef is what happened afterwards. No one's even said thank you on behalf of the people of Australia.

"But to not have any benefits at all for those two years, two years of a young man's life when 93 per cent of the people he grew up with didn't have to go in the army, that's what rankles with us."

Medical care is sorely needed by some Nasho Fair Go members. Geoff said one fell from a helicopter during training, landing on his back. Despite continuing pain and several operations since, he's still awaiting compensation.

Some of the scars the nashos still bear are less physical than emotional.

"Some blokes were embarrassed for years that they didn't go to Vietnam. When asked whether they'd gone into nashos, they just say no, they missed out, their number didn't come up."

Then there's survivor guilt. "There were other guys who were training with a company, a platoon, and for some reason - physically or different circumstances - their mates went to Vietnam, and they didn't.

"And they've suffered survivor guilt for the last 50-odd years as well. And I'm not talking about just feeling guilty. I've had men crying on the phone. It happens often."

While Geoff said although basic training was brutal, after a few weeks it was "like water off a duck's back".

"The problems came after in we got out."

Geoff was happily living and working in the NSW town of Deniliquin when he was called up.

Over time, however, he lost his girlfriend, friends and community connections. After finishing up he lost his career with the CSIRO, another job went belly-up and he had what he now recognises as a nervous breakdown.

He then spent three years wandering around Australia and then overseas. He also became a severe alcoholic. "It started in the army, which has a very heavy drinking culture anyway. I was a functional alcoholic for 50 years. I'm a year sober now.

At the time of writing, Geoff said Nasho Fair Go had about 350 members. Its goal is 2000 by the end of May.

"By that stage we should be big enough to get a seat at the table."