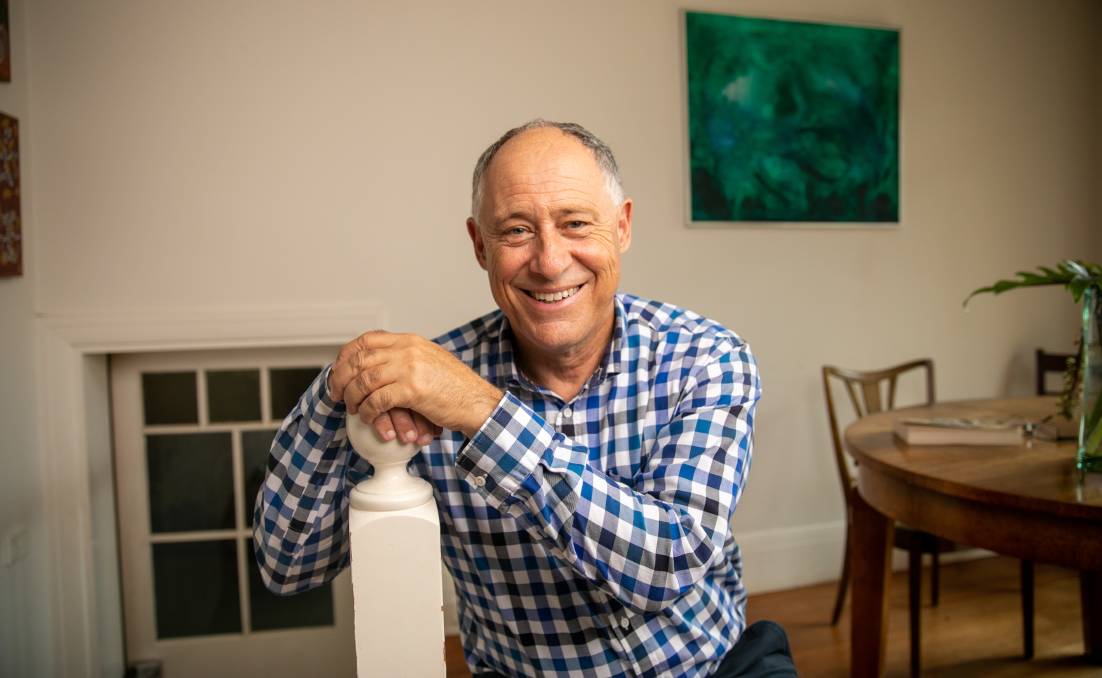 Henry Bernard rarely mentioned his past as a Holocaust survivor in Nazi-ruled Poland.

TO the locals regularly coming to him for medical solutions and baby deliveries, Dr Henry Bierzynski Bernard was a hard-working and beloved family doctor.

But he was also a Holocaust survivor whose psyche was profoundly affected by the experiences of the past, by what he had to do as a Jewish policeman, and especially by losing almost every person close to him, from his parents and young wife Halina to innumerable family and friends.

After emigrating from Poland and settling in Narrabeen on NSW's northern beaches, he was obsessed with paying off debt and took extreme steps for his family's security, even buying a rifle.

Although he stored his striped Auschwitz uniform and a picture of his mother in a special drawer in his wardrobe, he concealed a range of physical and mental scars from his loved ones and spoke little about his time in concentration and labour camps. He would never tell people he was Jewish, and denounced religion, saying there could be no God. 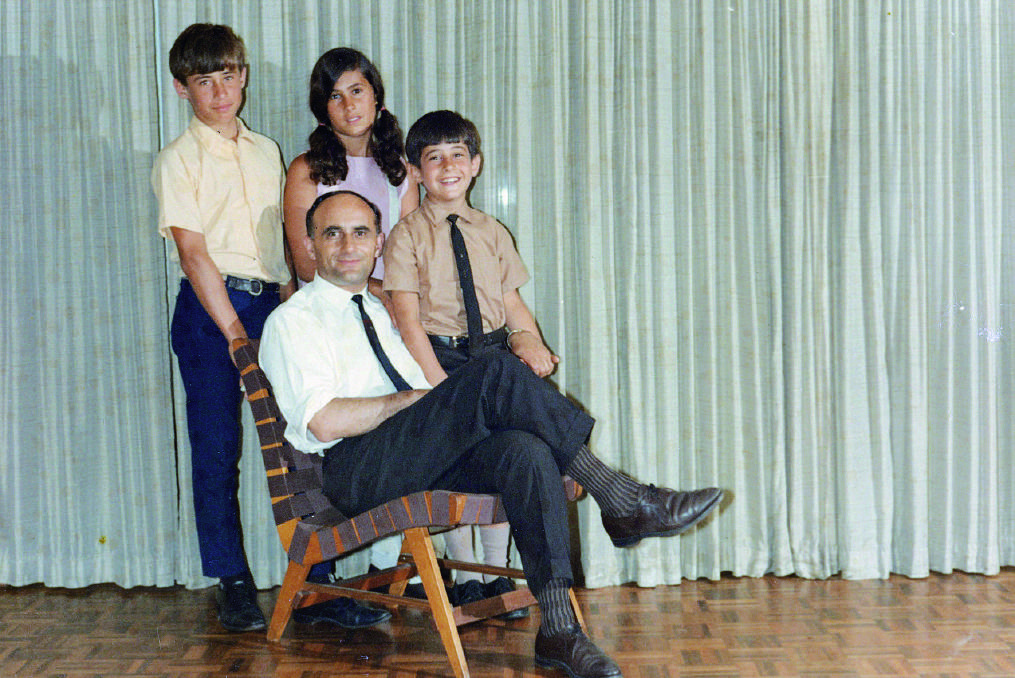 Henry Bernard was a solo parent to Tony, Nick and Fiona. Picture: Supplied

But he woke often from nightmares, screaming in Polish, and his obsessions and guilt destroyed any hope he had of a happy, conventional domestic life.

Henry's son, Tony Bernard, is a 66-year-old emergency doctor at Northern Beaches and Mona Vale hospitals. When we speak, he has just completed a long day in the vaccination clinic at Mona Vale. His book, The Ghost Tattoo, released this week, is based on his father's oral and written recollections as well as archival records from Europe.

It's a fascinating story; historians have told him that there is unlikely to be a more factual and detailed account of the life as a Polish Jewish policeman, anywhere in the world.

But all Tony was trying to do was understand his dad, his hero, for a story that he says he has been trying to write "really all my life - since I was 15".

Surviving the Holocaust was something that his father never talked about as they grew up in the idyllic northern beaches - all he knew was the faded Auschwitz B1224 tattoo on his left forearm, which Henry liked to joke was his bank card PIN.

"Back in the 60s, people didn't understand about the Holocaust and Auschwitz and he didn't want to talk about any of the people, such as his mother, and what he had seen," says Tony. 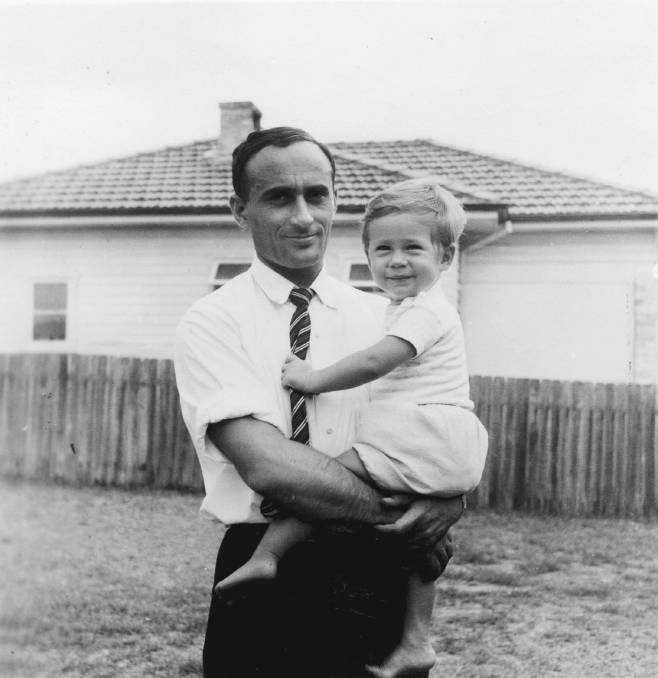 Henry and Tony Bernard in the northern beaches. Picture: Supplied

That is, until much later in life, when Henry would talk about little else. "Having spent half a century holding his silence, he spent the final quarter-century of his life in a great hurry to tell his story in as much detail as he possibly could before he left us," writes Tony. "My father really did keep that painful part of his life just so secret," he tells the Northern Beaches Review, adding that much of Henry's silence was in order to protect his family. "He was just so afraid of another Holocaust, which I know sounds crazy in Australia but he was absolute adamant about it. It was only 20 years after it all happened. He really felt like a Holocaust could happen again.

"I never realised how traumatised he was."

When he did start talking, he was particularly distressed about working in the Jewish Police in his Polish village. Basically, this meant he was part of the self-organised Jewish council controlling matters such as food distribution and curfew patrols, after the Nazis had forced the Jewish population into depraved ghettos. Henry Bernard pictured with one of his many beloved German Shepherd dogs. Although the Nazi's used them in the camps, he always felt they looked after him.

This also involved having to go around the ghetto and pick up all the bodies and take them to the cemetery to be buried in mass graves.

"As he slowly revealed more of his story, he told me most of the involvement in the ghetto police and his ambivalence and guilt about it," recounts Tony. "I didn't understand the guilt because it basically saved his life, but now after writing this book I can understand how bad he felt."

His biggest regret was not being able to save his mother, Theodora, who was transported to the Treblinka extermination camp in 1942.

"He kept on going on and on about how he couldn't save his mother. He never forgave himself and blamed himself. You would tell him the Nazis killed her and not him but he wouldn't own it," says Tony.

"He had terrible dreams where he would wake up screaming in Polish. He never sought medical care or psychological care. The whole generation was like that, they just soldiered on." Henry Bernard by the toilets in Auschwitz, where he retrieved his hidden diamond. Picture: Supplied

As his story unfolded, the details were mind-blowing. He had lots of lucky escapes - and five near death experiences, including being machine gunned on the road to Warsaw (they missed), shot at close range by a soldier (who had no more bullets left) and saved from a planned execution for having forged documents (a new commander took over).

As Tony says: "He went from normality to complete horror. They were all doomed. They were all starving to death, often deliberately by the Nazis, and then they were just being caught and killed. So many people he knew were shot." 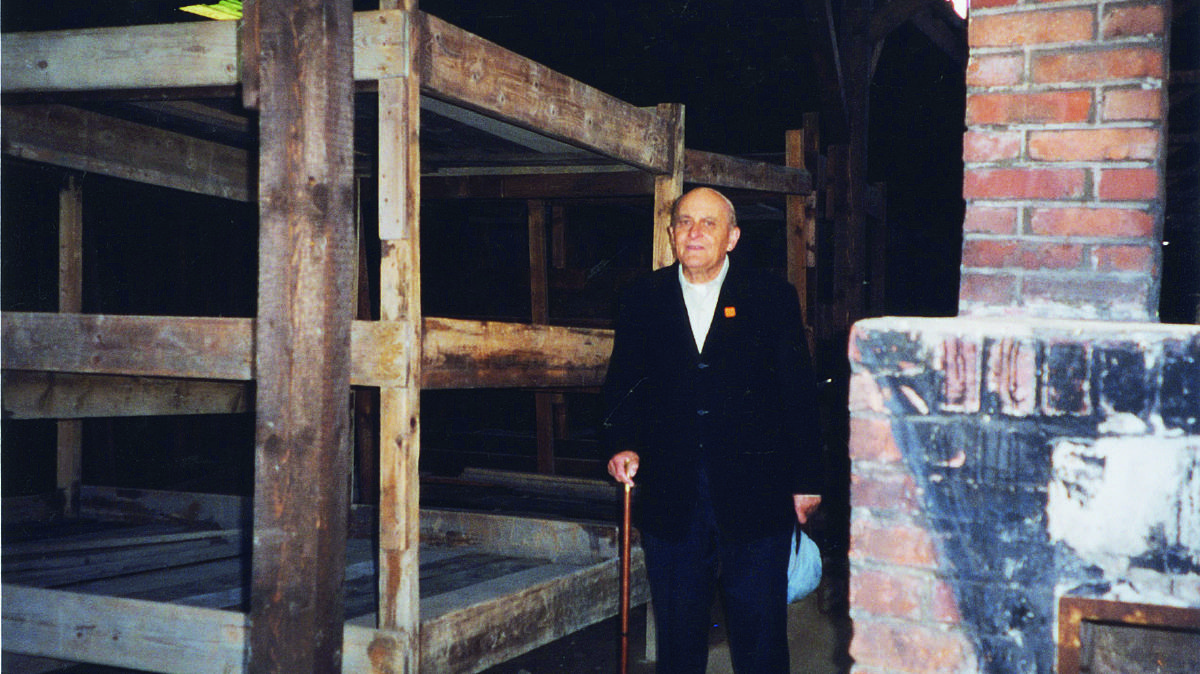 Henry Bernard by his bunk in Auschwitz. Picture: Supplied

And it was often former childhood friends, who had registered as Nazis, who were doing the shooting.

"It is so hard to believe that these people who grew up with them turned on their community so significantly. These people would just abuse that power that they had over them," says Tony. "They [later] just said they were told to do it and that's the way it was. But they became serial killers."

Henry Bernard and his Aushwitz tattoo.

Life in the beaches

It is astounding what Henry had to endure before moving to the - as Tony writes - "peace, sunshine and good life of Narrabeen", working as a doctor, having a family and living a fulfilling future.

But it wasn't a completely smooth ride. Early in their marriage, his second wife Evelyn went to the United States for a holiday and never returned.

Tony was seven-years-old, the eldest of three - his younger brother Nick was just 10-months-old and is now a well-known Narrabeen GP in his father's old surgery; his sister Fiona, also now a doctor, was four-years-old. Henry raised the three kids alone, with the help of housekeepers, while working long days and nights doing everything from obstetrics to radiology to surgery. 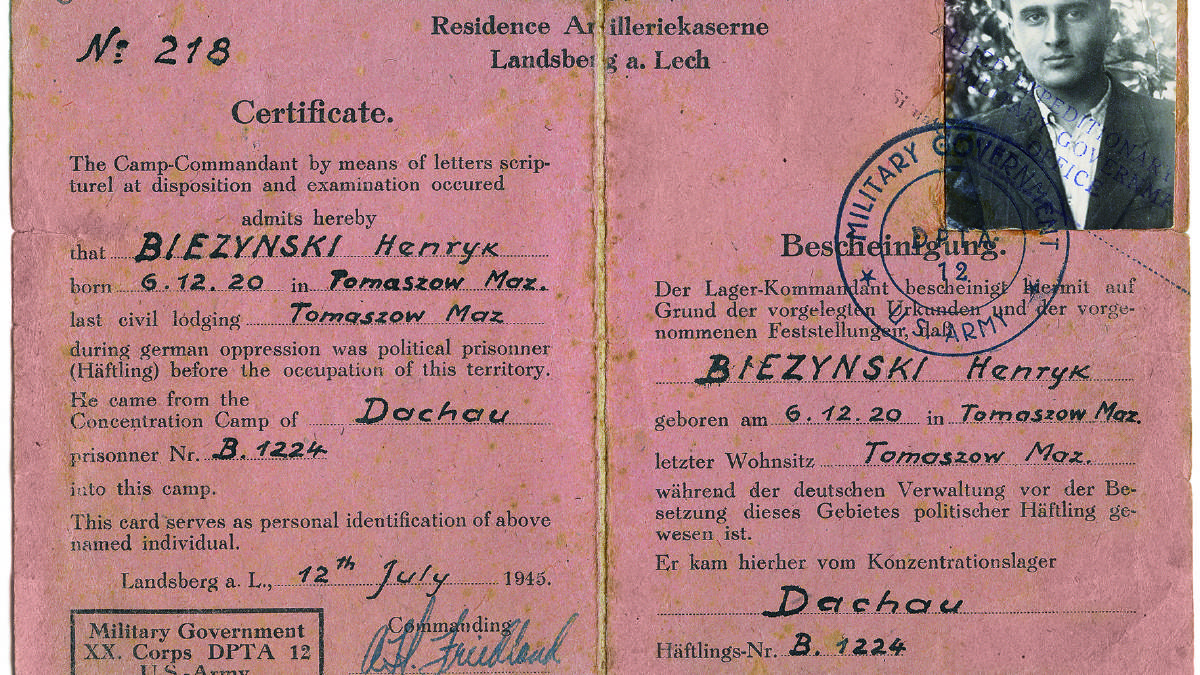 He delivered more than a thousand local babies and worked up until he was 82-years-old.

"Because we didn't know what he had been through, you just accept life as it was," says Tony. "I am amazed at how he was able to bury it all and get on with his life. There were only a couple of dozen doctors on the northern beaches back then - there are hundreds now - so he did it all. He was just a busy GP and part of the local medical fraternity and community and he loved it and he loved Narrabeen. 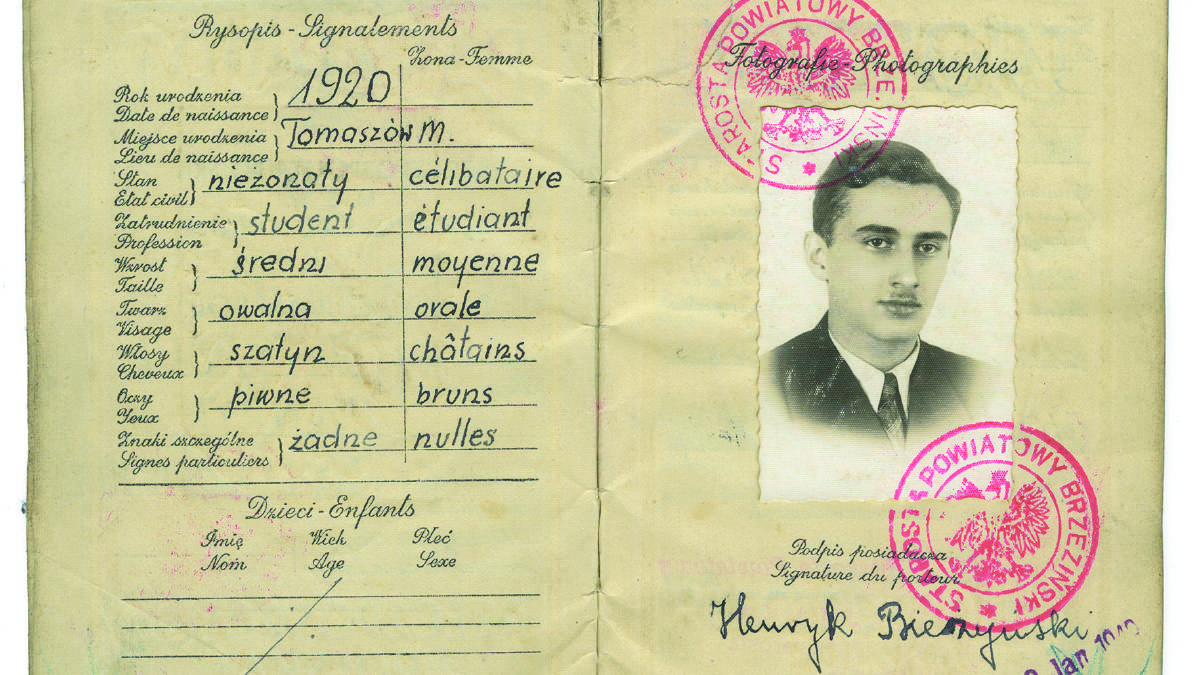 "He was very mentally sharp as well. He was a very loving father, he was a rock, we could always depend on him. He lost his temper on occasions but never hit us. He was a terrific father really, he did everything for us that he could. So his life was very good here.

"But I never realised how bad it had been until I was putting it all together. It was horrific."

Before he died in 2016, two months short of his 96th birthday, Henry was able to read an early draft of the book based on video recordings he had asked Tony to make. His only comment? "It's all true."

And his story continues to amaze the experts. At a war trial he testified at, one of the judges commented that it was the most historically accurate account they had heard - Henry had even corrected a map reference from memory, which was revealed to be a correct amendment.

As for Tony, writing the book has given him a deeper understanding of the Holocaust and the horrors of Nazi Poland. "I don't think people understood the torture and misery, the most horrendous experiences," he says. "The moment it happens, the entire country, everyone, their life is upside down." Tony feels profoundly moved and grateful that he was able to learn so much about the sad and complex life of his father, and he now has a sense of history and understanding of the connectness and randomness of it all. He is hoping to go back to Poland and show his daughter Sarah the locations, history and memories.

"My father's story is what will sell this book, not me: I don't pretend I'm a brilliant writer," he says. "But I'd love the book to do well so people can know about the story and also so it won't happen again."