Close to 300 people attended a meeting on Tuesday night 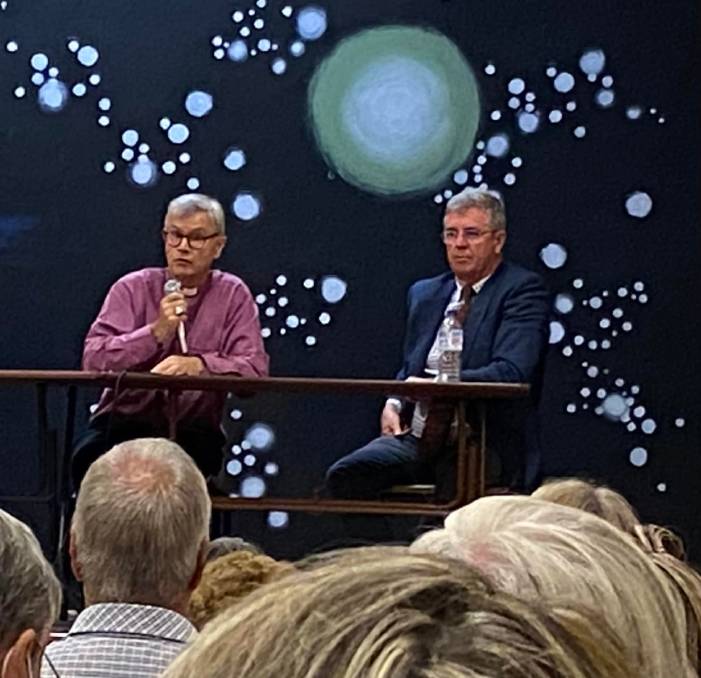 The Anglican church is determined to push ahead with its planned closure of Bulahdelah's only nursing home, despite passionate pleas from a desperate community.

Last Tuesday night, March 15 hundreds of community members spilled out of the Bulahdelah School of Arts hall appealing to the Bishop of Newcastle and Anglican Care president, Peter Stuart to reverse his decision to close Cedar Wharf Lodge.

Residents would begin to be moved to other facilities later this month, while the facility would close its doors on May 31.

Despite offers to repair, renovate and donate money to keep the nursing home open, Dr Stuart rebuffed every offer of assistance.

According to one local, the decision by the church to close the nursing home was made late last year.

However, residents, staff and families were not notified of the plan until Tuesday, March 8.

Former MidCoast Council councillor and Stroud resident, Karen Hutchinson said her impression was that the church had made its decision, and that was to close.

"While I'm no longer a councillor I am passionate about our community," she said.

Mrs Hutchinson said she believed the bishop was not interested in anything the community had to say.

"He showed no remorse or compassion.

Mrs Hutchinson said the bishop did not share the church's future plans for the site.

"We will be told the future of the site when the bishop feels fit; there is a plant, which none of know other than the bishop."

Bulahdelah resident and meeting organiser, Anne-Marie Barry said she felt sorry for the residents, their families and the wonderful, caring staff at the home as they faced an uncertain future.

"Time is the biggest problem and it was never on our side," she said.

"To pull together a solution in just two weeks is a huge ask especially when one of the players doesn't want to play.

"I just need to dust myself off and get on with where to from here.

"Yes, I'm gutted, extremely disappointed, very disillusioned by the lack of empathy but I'm not done yet."

Yes, I'm gutted, extremely disappointed, very disillusioned by the lack of empathy but I'm not done yet. - Anne-Marie Barry

"Over the years, I have been very supportive of Anglican Care in my electorate, including the ongoing expansion of the Federal government's investment in aged care across the region, as well as helping to secure a regional development grant of $8-million towards the development of Mirabooka Place Residential Aged Care and Retirement complex in Gloucester," Dr Gillespie said.

"In the discussion with the bishop and in follow up correspondence, I respectfully requested he and his board give further consideration to keeping Cedar Wharf Lodge operational to allow alternative options to be pursued to keep the facility open.

"Such options may include the pursuit of regional-specific funding, such as that achieved for Gloucester, or an alternative operator, who may wish to take over the operation of the facility.

"I believe there are other potential operators who may wish to take over the facility, but that will of course require goodwill on behalf of Anglican Care.

"I also highlighted that the property and buildings of Cedar Wharf Lodge were built by the community through fundraising drives and the like, and handed over to Anglican Care, confident in the organisation's ability to ensure Cedar Wharf Lodge's long-term future.

"Given Anglican Care's decision, I also asked the bishop to consider returning the assets of Cedar Wharf Lodge back to the community.

"Since I was only informed about this decision last week after locals contacted me, I have tried to seek the turnaround of Anglican Care's decision, which appears to have been made many months ago.

"While Covid has been a very significant challenge for our nation, the nature of lockdowns and the government's economic stimulus measures has generated a massive "treechange and sea change movement" of people seeking to leave the capital cities to idyllic places like Bulahdelah.

Did you know? Great Lakes Advocate online subscribers not only have 24/7 access to local and national news, sport, what's on and entertainment - they also have access to our print edition in digital format, with all the advertisements and classifieds at their fingertips.

This story first appeared on the Great Lakes Advocate