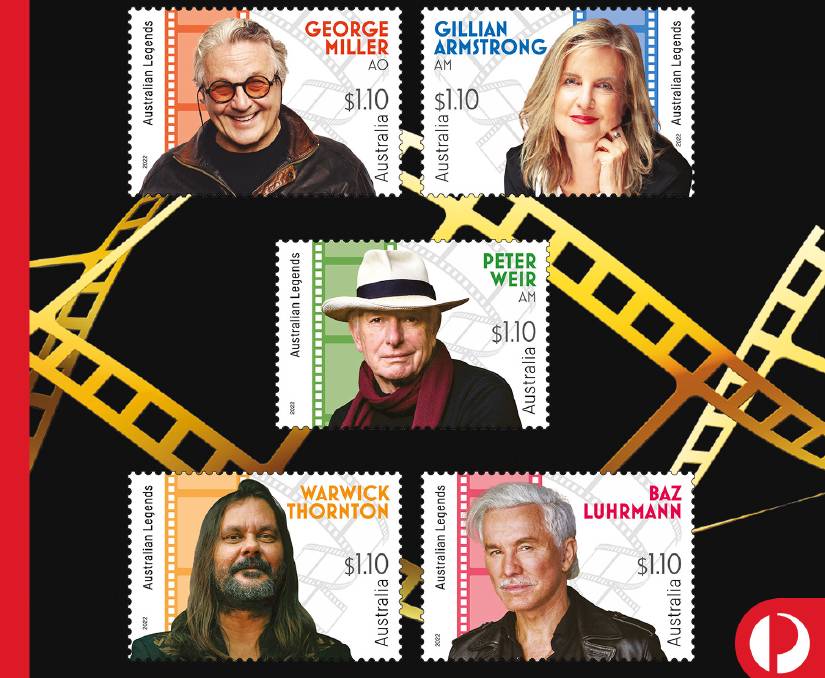 Film Directors - Baz Luhrmann, George Miller, Gillian Armstrong, Peter Weir, and Warwick Thornton - will each have their portrait featured on new postage stamps as part of the 2022 Australian Legends of Filmmaking stamp issue.

Australia Post Group Philatelic Manager, Michael Zsolt said each of the directors had been recognised not only for their vision, talent and acclaim, but for their diverse and impactful storytelling on a national and international scale.

"Each year since 1997, we've celebrated living Australians who have made a unique contribution to the Australian way of life," Mr Zsolt said.

"The films created by our 2022 Legends all tell powerful stories that connect strongly with Australian audiences and help to shape our perception of not only ourselves but historical events and important socio-cultural themes."

Gillian Armstrong, who amongst many accolades, received six AACTA awards and a Palme d'Or nomination for her very first film My Brilliant Career in 1979, said it was an honour to be a recipient of the 2022 Australia Post Legends Award alongside such a totally brilliant group of film directors.

"It's wonderful that our film directors are being recognised for the powerfully unique and heartfelt Australian stories that we make - and it is a thrill to be named a Legend of an industry and artform that I'm so passionate about," Ms Armstrong said.

"I used to collect stamps as a child, I liked those little pictures. So, it feels particularly full circle to be recognised for my big pictures!"

The annual Australia Post Legends Awards celebrate living Australians who have made a unique contribution to the nation through their field of endeavour, inspiring the community, and influencing the way Australians think about themselves.

The stamps and associated products are available at participating Post Offices, via mail order by phoning 1800 331 794, and online at auspost.com.au/legends from Tuesday, March 15, 2022, while stocks last.