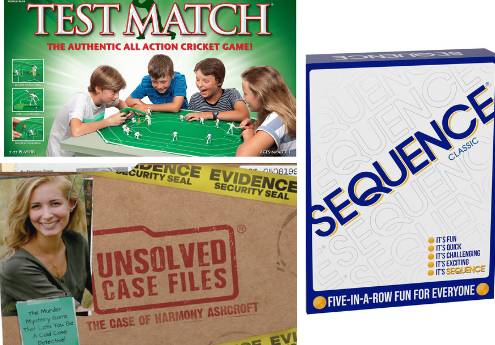 Card games, cracking cases, cricket in the lounge room - this games package has it all!

THREE new games from Crown & Andrews and Goliath Games will seek out the sleuth in you, test your skill and let you have your very own Ashes series at home.

Unsolved Case Files: Harmony Ashcroft challenges players to go through the evidence, solve three objectives from the game's website and solve a crime. If you get stuck, the online answer key can offer hints.

Players get more evidence online after solving each objective.

Sequence is a board and card game in which players compete to create rows, columns or diagonals of five connected checkers placed on cards the player has laid down.

Two-eyed Jacks are wild, while one-eyed Jacks allow an opponent's checker to be removed. The game ends when someone has reached a specified number of connections.

Test Match brings Test, One-Day and 20/20 cricket into your home. The batsman works with a trigger action for a faster response, and fielders can even "catch" the ball between their feet.

And the game will never get washed out!