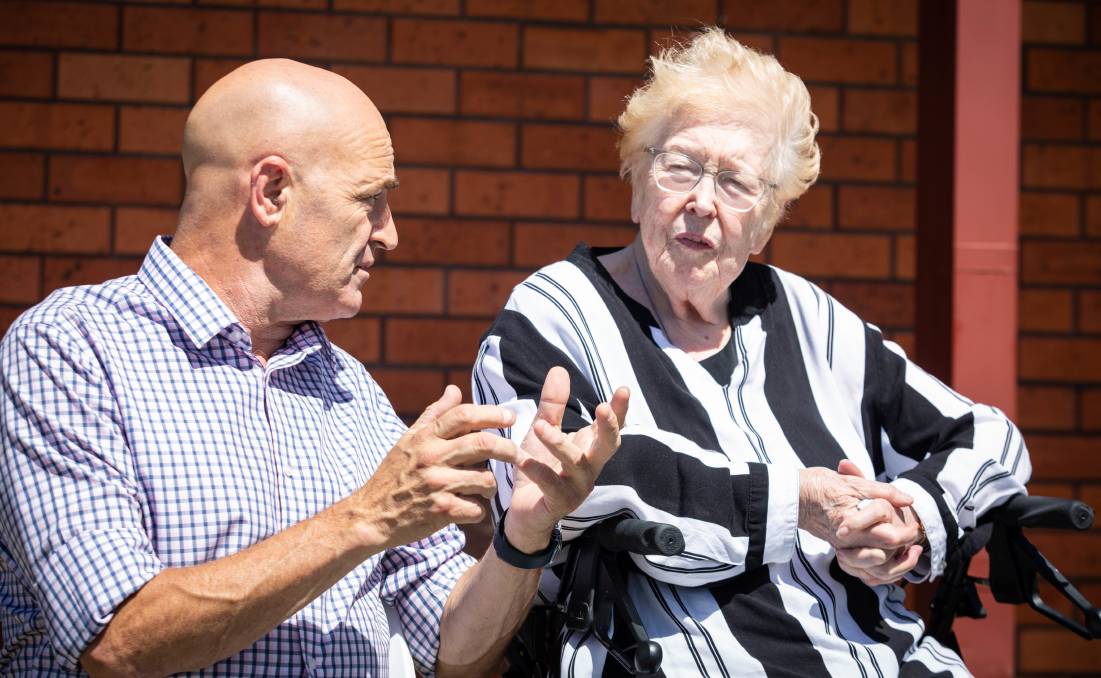 Challenging Move: Former senator Kay Denman chats to longtime friend Labor candidate Chris Lynch about how tough it has been realising it was time to move into aged care. Picture: Eve Woodhouse.

She served as a senator for Tasmania from 1992-2005 and was a 'trailblazer' in the areas of LGBTIQ rights, medical ethics, access to justice and the rights of people with disabilities.

"In those days children with disabilities weren't allowed to be cared for in day care and I didn't agree with that," she said.

Now that she's living in an aged care home at 84 she is candid about how emotional the decision was to enter a residential facility and how under-resourced the sector is.

It's a lot different living in aged care than looking in from the outside as a politician.

The transition from her home in Devonport, on Tasmania's north coast, to a room in aged care has been the most challenging experience.

However, it's not a unique one, as so many families go through it.

"I don't really want to be in aged care yet," Ms Denman said days after moving in.

However, after she fell a few times in recent years her situation changed.

"I lost a lot of confidence, and I wasn't feeling as secure as I used to," Ms Denman said.

However, after another fall her daughter and son interstate were concerned.

"When I fell just before Christmas, the hospital kept me for a couple of weeks and I caught COVID, which made me incredibly tired," Ms Denman said.

"It made me think that I need to start being sensible, and I decided to move into residential care.

"It was a tough decision, and I'm not a person who cries much, but I was in tears all day before I came in.

She felt lucky to have people she could trust to help with things such as selling her house a job she found too emotionally hard.

Only after moving into a home did she consider the aged care issues in the headlines.

"After I got here I started thinking about it, and there's not nearly enough money put into aged care," she said.

"It's not the place itself; they're fabulous here; they've been really good to me. I can't complain at all, but gosh, they're flat out.

"There aren't enough staff, and they do try; honestly, I've got no complaints about it here.

"I feel for the staff.

"They're so busy they don't get enough time to relax or to relate to the residents even though they do try it just isn't possible because of the number of staff.

"I think we should be more conscious of the needs of the people in aged care and more proactive dealing with aged care issues.

"I can't speak highly enough of how hard they try to meet your needs, but they can't without enough funding.

"I was thinking about something yesterday, and I thought, why isn't that happening? It would if I was at home, and then it suddenly dawned on me this is home."