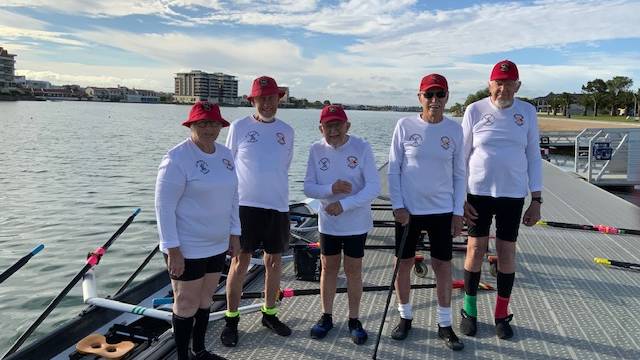 With an average rowing age of 89, this could well be Australia's oldest rowing team.

Could this be the oldest coxed quad four rowing team in Australia? With the spring chicken of the group boasting an impressive 87 years, they'll take some beating.

The four men have a combined rowing age of 89 - rowing age is determined by what age a rower will be at the end of a given year.

The team is coxed by 78-year-old Jan Wallet.

The men have been rowing together ever since Lance joined the club in 2015.

A rower in his youth, Lance decided to return to the sport at the ripe old age of 84-years-old, following a 65-year absence from the sport.

"I needed something to do, I'd retired at the age of 77 and was at a bit of a lose end," he explained.

"I went to Australian Masters in Adelaide (as a spectator). About a year later, I signed an application form and joined Riverside Rowing Club.

"I enjoy the companionship and the exercise and the joy of rowing with my fellow rowers."

The other three team members go back even further, having rowed together with another teammate who passed away prior to Lance's arrival.

The club has a headquarters on the River Torrens, and the men practice on the West Lakes 2km, eight lane rowing course.

The foursome are also world record holders - they were part of a 10 person team which set a record in the 80-89 year age group, rowing 100km consecutively on a rowing machine in a time of nine hours, four minutes and 32.9 seconds.

The record-setting row was organised by Jim Penfold, who was 80 at the time. Jim was the youngest member of the five man, five woman team, which was made up of rowers from Riverside and Port Adelaide rowing clubs.

Each team member would complete 500m at a time, trading places with the next rower in line before the machine had stopped spinning.

"I was looking at the world records and saw there was no world record in the 80-89-year age group," Jim said.

"We went through all the training, and it took a lot out of us, but we were really pleased we finished it off."

Rowing is not Lance's only way of staying young at heart. He turned 90 on Boxing Day last year, and celebrated the occasion by parachuting onto Semaphore Beach.

"I wanted to do it on my birthday, but the weather wasn't right, so I had to delay it by two days," he said.

"I had parachuted once before, 30 years earlier in WA.

"When you're sitting on the edge of the door of the plane and looking down 15,000 feet, you think to yourself 'What am I Doing?' But once you get moving, it's alright. I felt very safe."

"When we do compete, we always win a gold medal, because we're the only team competing," Lance said.

Surely, competing at their age is worthy of a medal in itself!