The natural beauty and incredible detail of the native animals depicted on the Kingscote silos on Kangaroo Island impress all who see them.

The latest addition was a second glossy black cockatoo with its wings spread, while additional detail, such as vegetation all the way up the silo tower and limestone rocks under the kangaroo's feet, were also added in the final days.

And if you look closely, you can also see a flock of little corellas sitting in the trees. 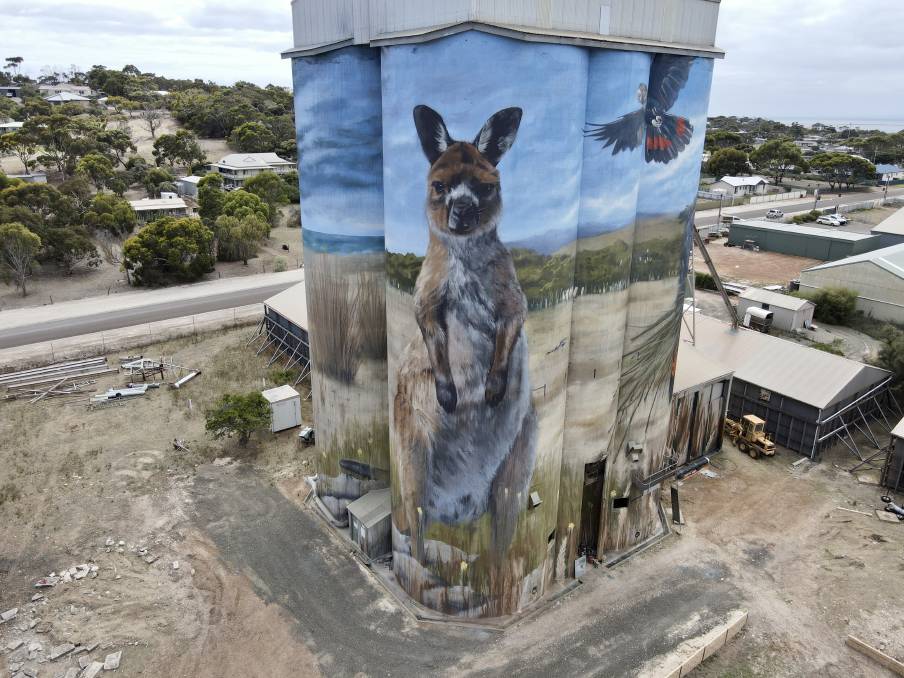 It took the visiting artists four weeks to complete the project, using photographs of the native animals of the Island.

The painting of the town silos has been a long-term goal of Advance Kingscote Progress Association and is part of its "Igniting Kingscote" project.

Silo owners Scott and Jude Shurven have also been instrumental in bringing the silo art project to KI and have a grand vision for the property, disused since 2013.

The artists were able to tour more of the Island on their last day, visiting Remarkable Rocks on the southwestern tip and also Emu Bay's award-winning beach.

The pair flew back home on Wednesday, Mr Scale to Tweed Heads and Mr Davis to Melbourne.

Many on KI were curious as to how they actually managed to paint such a large scale structure, while keeping the proper proportions of the animals and other features.

"It's a grid system, so it's all boxes and once you get you get everything in the right place, you have a bit more room to move," Mr Scale said.

"You proportionate it to the reference you are working from and then the same mark is up on the structure."

Painting animals was not that different than painting humans, in that the artist needed to have them looking realistic and with the right emotions.

In other words, the last thing Mr Scale wanted was an angry kangaroo.

The stunning glossy black cockatoo eating sheoak cones was based on a photograph by renowned wildlife photographer and expedition leader Dr Andrew Peacock.

Dr Peacock took the photo on KI and supplied it to the local Birdlife Australia representative Caroline Paterson for possible use in a Kangaroo Island bird identification booklet that's nearing completion.

"Andrew Peacock grew up and studied medicine in Adelaide and now works half of his time as a doctor in Brisbane hospital emergency department and the other half as an expedition leader and nature photographer," she said.

"He kindly provided Birdlife Australia images of glossy black-cockatoos taken on Kangaroo Island during one of his visits here after we put a call out for photos of our seventeen endemic sub-species, and species of concern, last year." 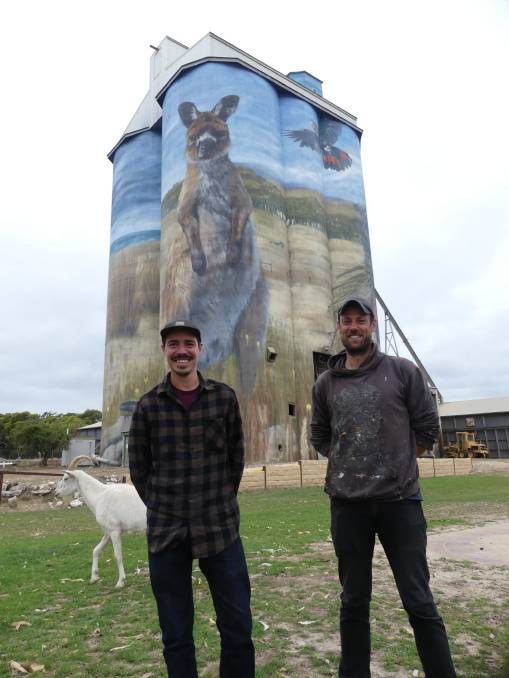 The one peculiar challenge to this project was working alongside a couple of friendly, if pushy, goats that keep the silo property vegetation in trim.

The Shurven family have also been busy improving the site and building the retaining walls to the new cafe and visitor area.

In coming months, the Shurven will continue the work, erecting the playground pieces already on site and pouring a new concrete floor in one of the sheds for the cafe.

The old weigh-station building will also be transformed into a bit of kids' play space.

The silo trail organisation is producing a second calendar for 2022, and is welcoming nominations for projects.

A portion of the proceeds raised goes back to the communities that are featured.

The inaugural 2021 calendar was a great success, and the silo trail organisation was ecstatic to be able to donate over $60,000, back to the 14 communities it featured.

The KICE geography class has already made contact with Mr Scale and will learn more about how he made the fabulous artwork.

There are now 51 silo art projects across Australia, with Kangaroo Island being the latest.

This story first appeared on The Islander

Check out more of Stan's videos: