Pharmacists say they are facing thousands of dollars of negative cashflow in advance payments to secure tests they say then might not ever arrive.

Pharmacists fear they'll be left holding the ball for the cost of federal government's plan to provide free rapid antigen tests to concession card holders, as details of the scheme's roll out remain unclear and wholesalers' stocks run out amid rampant demand, forcing chemists to purchase tests up to a month in advance of delivery from smaller less reliable sources.

Pharmacists have described feeling stuck between an unprecedented demand for tests from the public, a relative scarcity of tests available for purchase, and a dearth of clear information and direction from state and federal governments about how the scheme to provide free rapid tests is supposed to unfold from Monday.

The national cabinet declared earlier in January that up to 10 free rapid tests would be provided through pharmacies to more than six million concession card holders, and that the cost of the tests would be divided between states and the Commonwealth.

But, as the roll out approaches, a number of pharmacists who spoke with the Newcastle Herald onSaturday say they are facing thousands of dollars of negative cashflow in advance payments to secure tests that then might not ever arrive.

"Some people have managed to procure some stock, but it's very difficult," Newcastle pharmacist Manish Bagga, based in NSW's Hunter Valley, said. "You're having to pre-pay for stock, and suppliers are telling you that it is coming in the next day or two, but it tends to be the next week or two weeks."

The proprietor and lead pharmacist of Bagga's Pharmacy said the market had struggled to meet the skyrocketing demand as governments and health authorities transitioned toward rapid testing to tackle the omicron outbreak, and relieve stretched pathology labs running overwhelmed PCR testing clinics. 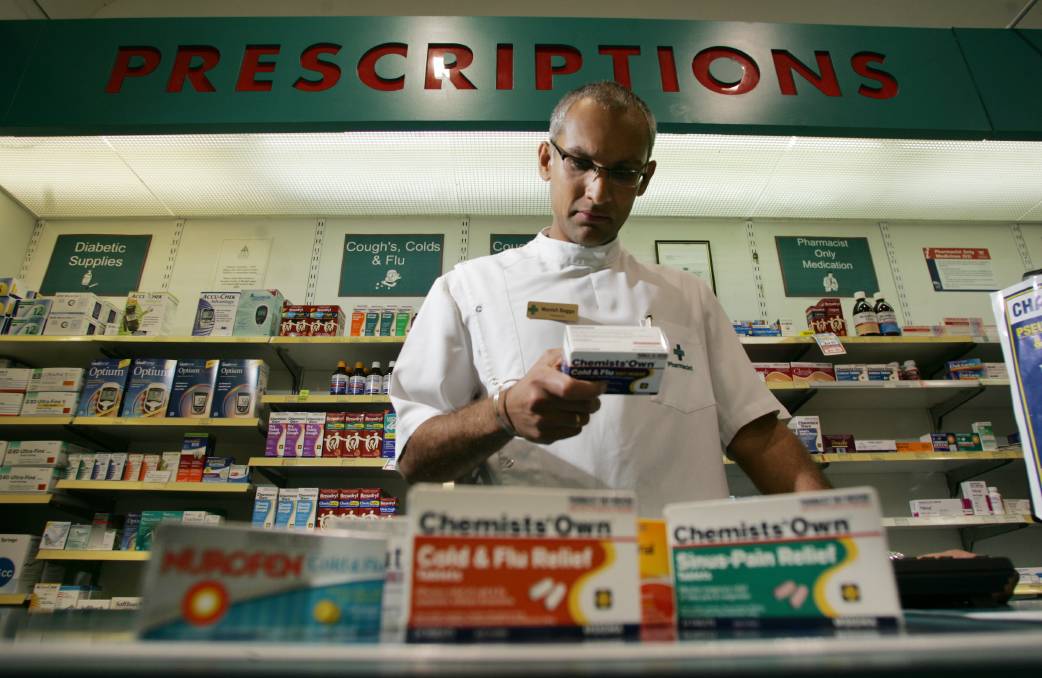 Bagga's Pharmacy proprietor Manish Bagga said much of the detail of how state and federal governments' plan to roll out plans to deliver free tests to concessional card holders remains unclear, leaving pharmacists without answers amid high demand for rapid tests among customers.

He said pharmacies were paying tens-of-thousands of dollars in advance, desperately trying to secure any rapid antigen test stocks available, as unscrupulous sellers moved into the market and shipments were delayed or even cancelled before they ever arrived.

"You will order stock and then it will get cancelled before it gets to you because it's been seconded by the government," Mr Bagga said adding that he had not received any clarification on that point as to whether those requisitioned tests would then be distributed directly to concession card holders or whether the roll out would continue to flow through pharmacies.

"The only way that you can procure stock is in bulk," he added, "And you don't know what's happening - whether the government is going to then start to give them out at no charge in a different avenue, which would mean there will be some pharmacies with hundreds of thousands of dollars worth of stock that is just going to sit there - or, whether the demand will stay the same. I'm just not sure - it's been a nerve-wracking couple of months."

Mr Bagga said the uncertainty had left pharmacists unable to provide clear advice to their customers at a time when they needed it most.

"I think the community is scared and nervous," he said, "Everyone wants to do the right thing - everyone wants to test and they have been told to test, but they can't because there are no tests.

"It's very frustrating - to the point where we can't answer our phones because we're just receiving too many calls." 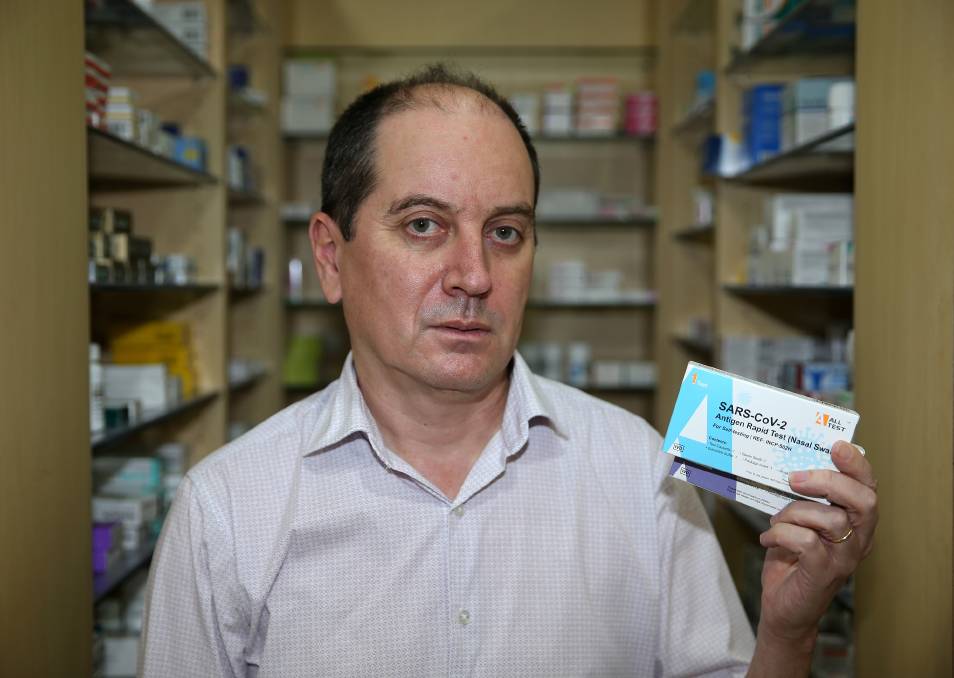 Newcastle Pharmacist Ron Elliott says he would rather get rapid antigen tests our as soon as possible to the community, but harbours concerns for government plans to reimburse pharmacies for concessional tests. PIcture: Peter Lorimer

In Newcastle West, pharmacist Ron Elliott said he was forced to triage calls to just one phone line in past weeks as he and his staff were overwhelmed by inquiries about test availability.

"We actually had to pull the plug on one phone because I was just running from one end of the dispensary to another answering phones - and not doing anything other than answering phones," he said. "95 per cent of the phone calls would have been asking about antigen tests."

Mr Elliott said, while his staff were coping, the pressure to answer demand for testing was taking its toll.

"We're getting a bit of pressure where people are asking whether we have antigen tests, and then a large percentage will ask why not - what is happening - and quite frankly, we don't have an answer."

Mr Elliott said he had been able to secure a small amount of tests but only a percentage of the total shipment he had expected.

"We were asked to nominate how many tests a week we could commit to - it was a minimum of 100, we committed to 300, but we haven't seen any of that stock yet. We have heard rumours that it's coming, but not a date of when it's coming," he said. "I would expect it would probably be in this next week, because that is the last week of the month and that's when this program is supposed to start.

"We have been getting drabs of stock, but rather than say 300, we might get a dozen or a couple of dozen. But that's only just over 10 per cent of what we ordered."

Compounding the concern, Mr Elliott said pharmacists were still unclear of how remuneration for the concessional tests was expected to work.

"We're not even 100 per cent sure of the remunerations," he said, "There is some concern about how we're getting paid for these things. I think it's just a case of they haven't worked out the details yet - basically making it up as they go along."

"My personal opinion is let's do everything we possible can to get these things out, and work out the dollars and cents later. But I will be really annoyed if it turns out we're out of pocket at the end of this."

My personal opinion is let's do everything we possible can to get these things out, and work out the dollars and cents later. But I will be really annoyed if it turns out we're out of pocket at the end of this. - Pharmacist Ron Elliott

"Obviously, there isn't enough supply, but we've seen private company after private company complain that they're being told by their wholesalers that their rapid antigen tests have been requisitioned by the federal government," Ms Claydon said in a statement Friday.

"It's extremely concerning that the orders pharmacists have placed to prepare for the commencement of the new RAT scheme have now gone missing.

"At the end of the day, Scott Morrison has failed to do his job on rapid antigen tests, just like he did with quarantine and vaccines. As a result, local families, pharmacists, and small businesses are paying the price."

In announcing the concessional scheme earlier in January, the Prime Minister said that 200 million rapid tests would be coming to Australia over the next two months and that national leaders had also agreed to limit the number of tests people can buy to one box of either two or five tests at a time.

Opposition Leader Anthony Albanese has meanwhile urged the government to make the tests free for everyone rather than only for concession card holders, in line with a choral call from - among others - the Public Health Association of Australia and Australian Medical Association for free test provisions similar to those in the US, UK and Singapore.

Mr Albanese labelled the Commonwealth's plan a failure, but the Prime Minister maintained earlier in January that neither the federal government nor any state or territory leaders had agreed to universal access to free rapid tests.

In the meantime, COVID testing clinics Singleton were expected to re-open weekdays from Monday with updated hours released by the operator, 4cyte Pathology, at the weekend.

All 4cyte clinics were expected to be closed on the January 26 public holiday. The operator said Saturday that it expected to re-open further clinics in the coming week.

The story Pharmacists fear being left in the dark over free rapid COVID test roll out first appeared on Newcastle Herald.