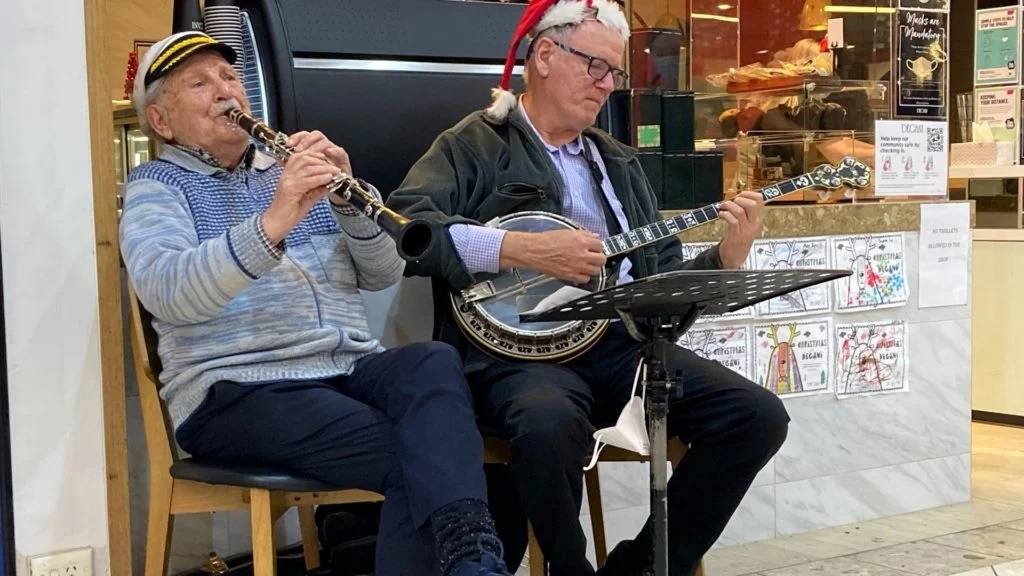 AND LOVING IT: Nick Polites and Tony Orr entertaining shoppers at Ivanhoe Mall in 2020.

Jazz clarinetist delighted audiences for decades and once played beside Louis Armstrong.

Jazz fans around Australia have lost one of the best. Melbourne's Nick Polites OAM died on January 14 at the age of 94.

Born to a migrant family, for many years he ran the family confectionary business before selling the company and helping found the Greek Australian Welfare Society, Pronia, where he was director for 15 years.

He was a champion of multiculturalism and instrumental in the appointment of more Greek-speaking social workers.

But Nick was also celebrated as one of Australia's finest jazz clarinetists. A fixture on the music scene, he played alongside his group, The Louisiana Shakers, for decades.

Inspired by the sounds of Louis Armstrong's Hot Five and Hot Seven recordings, he made his debut, aged 19, at the first ever Australian Jazz Convention.

He was entirely self-taught.

But so accomplished did he become - his recording career began in 1951 with Frank Johnson's Dixielanders - that he went on play with some of the biggest names in the business.

He even accompanied his hero Satchmo on stage when the big man came to Melbourne in 1954.

Even in retirement Nick jumped at the chance to perform in public.

As recently as last February, he could sometimes be found outside Degani Cafe in Ivanhoe Mall delighting passers-by. (To read the full story, click HERE.)

Nick's farewell will held on February 3 at Le Pine Funerals, 741 High Street, Kew East, at 2pm. It will be live-streamed for those who cannot attend.