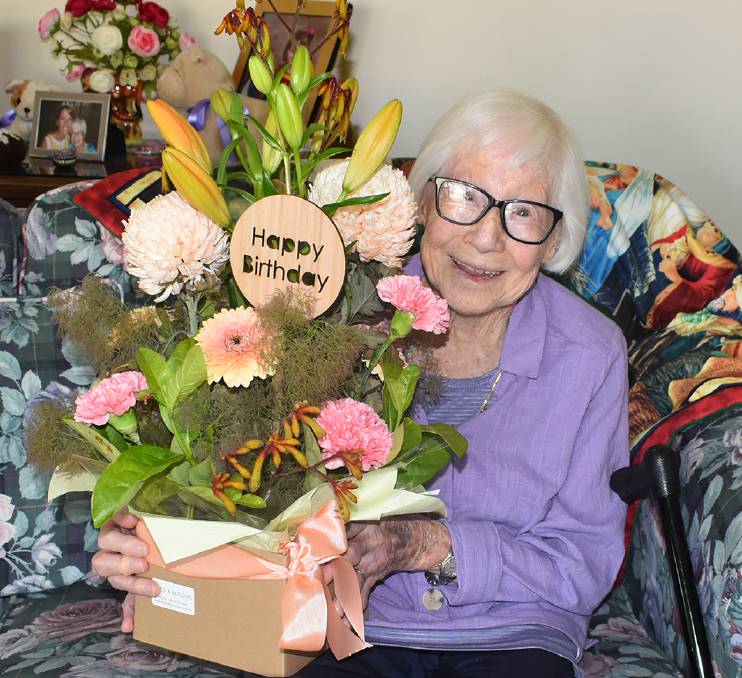 Resthaven Onkaparinga Community Services client Phyllis 'Jean' Croxton has celebrated her 100th birthday in true fashion in the comfort of her home.

"I was born in 1921, growing up with five brothers and two sisters in Norwood," she said.

Jean spent seven years in school, and after completing her qualifying exam, she began her career as a dressmaker at Vogue Australia. Little did she know, she would become one of the best dressmakers of her time, highly coveted by Vogue and the fashion community across Australia.

"I had no desire to marry young, as others around me did. I was quite ambitious and happy in my career, where I stayed until retiring in my 70s."

In 1943, Jean discovered she had bowel cancer, which she has now had for 80 years.

"I'm known to say, "you can always turn lemons into lemonade", and I was hopeful that I could do that through this next challenge in my life, and I did.

"In 2000, I carried the Olympic torch over the bridge at Regency Park - I am so happy that I was able to do that."

While Jean was dealing with more than the average young adult in their 20s, it was during this time that she fell in love with her brother's childhood friend, Ronald, or Ron.

"Ron found out I was sick, and he came to visit me at home. I didn't know that he cared much about me until then," she said.

"Soon after that, he went off to war, so we became pen-pals. We continued to write to each other for two years."

Jean also found herself entrenched in the war, due to a shortage of nurses. She worked as a Red Cross Nurse for a short time, before returning home to support her sister.

'When Ron was away, my sister went into labour, but didn't live long enough to hold her baby," Jean said.

"I sent Ron a telegraph to let him know I wanted to take her on as my own. Telegraphs back then were sometimes unclear, and he returned to a big surprise.

"We married once Ron returned from war. My father gave us his blessing to raise Frances in our home - we couldn't be happier, because we already saw her as our daughter."

When Jean retired, and her husband passed away, she found a new lease on life.

"My entire house is filled with oil paintings from my travels, and things I hold close to my heart. I have sold many over the years and have gifted to those I love."

Currently, lives resides in her home, with the support of her daughter, Frances, and Resthaven Onkaparinga Community Services.

"If it wasn't for Resthaven, I wouldn't have made it this far. It is important to be able to live in your home for as long as possible, and I commend Resthaven for making that possible."

Jean's words of wisdom to the younger generations is: "It's not what happens to you, it's how you handle it. I am grateful for everything that I have, and the life I have lived."

Established in 1935, Resthaven is a South Australian not-for-profit aged care community service associated with the Uniting Church in Australia.

Every day, Resthaven shares the lives and wisdom of older people and their carers, opening doors to the full range of aged care service options available.