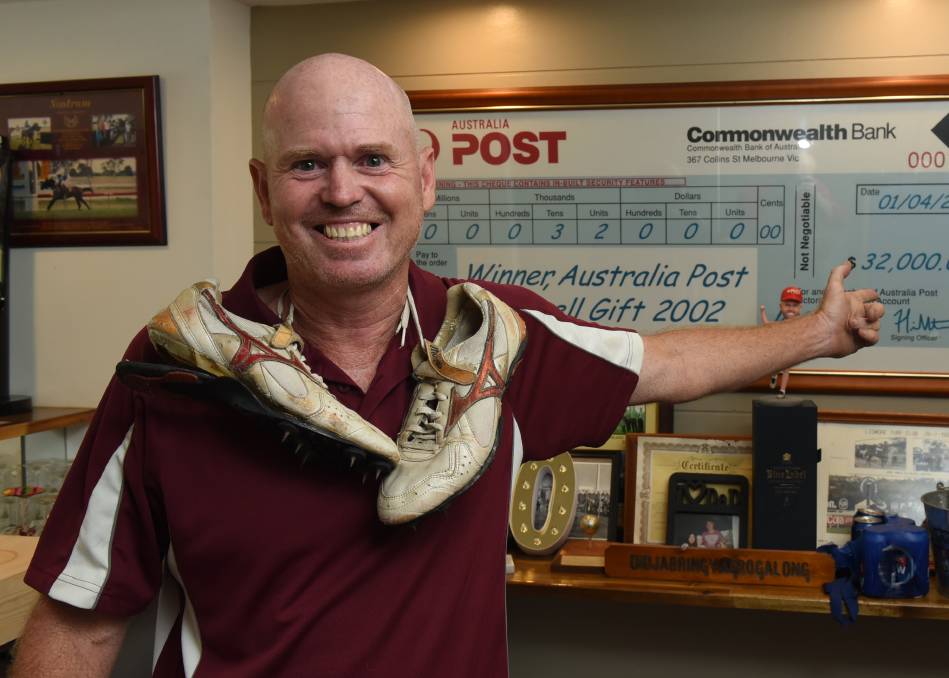 Quick: Stu Uhlmann has clear memories from the day he won the Stawell Gift in 2002. Pic: Matt McLennan

In less than 100 days, Australia richest footrace will be run.

In less than 100 days, Australia richest footrace will be run.

The Stawell Gift has a place in the nation's sports consciousness - and for Stuart Uhlmann it's well deserved.

The Queenslander still has the shoes he was wearing the day he won the 2002 Stawell GIft.

The 20 years since has gone by in the blink of an eye, but Uhlmann still has clear memories of the day he triumphed in Australia's richest foot race, winning in 11.98 seconds.

He said he was backed from 33-1 to be the late favourite, before taking the win and the $30,000 prizemoney.

The novelty cheque still hangs in the bar at Uhlmann's Glenlogan house, along with the battered running shoes and the bottle of champagne which he never opened.

"It would probably kill you now if you drank that," he said.

He ran off a 6.75 metre handicap in the 120m dash, and Uhlmann said from the time the athletes were given their marks, he knew he was in with a shot at winning.

"I just had to stay choke-free, and go down there and do what I was doing at training," he said.

I was running about 11.7s. If you are running 12 dead, you're going to be winning a Stawell Gift. - Stuart Uhlmann

Punters who backed Uhlmann would have cleaned up if they got their money on early.

"I was 33-1 at the Town Hall," he said, referring to the odds given to him on Good Friday, three days before the race.

As he progressed through the heats and semi-finals, Uhlmann's race odds shortened.

He knocked off Nigeria's Ambrose Ezenwa in his heat, before qualifying for the final.

"You have to win your heat, otherwise you're gone," he said. "There's no second chance."

As the odds fell, his nerves grew.

"The night before, I didn't sleep a wink," Uhlmann said. "If you knew how much I didn't sleep on the Sunday night, you wouldn't have put a cent on me."

An attempt to escape the crowd and watch television at his accommodation backfired.

Uhlmann flicked on a sports program, only to see his name flash across the bottom of the screen in news he was the unbackable favourite.

The Stawell Gift, returns to Central Park over the Easter long weekend for three days of elite athletic racing.

The action starts on on April 14.

The story Countdown to the Stawell Gift begins first appeared on Jimboomba Times.