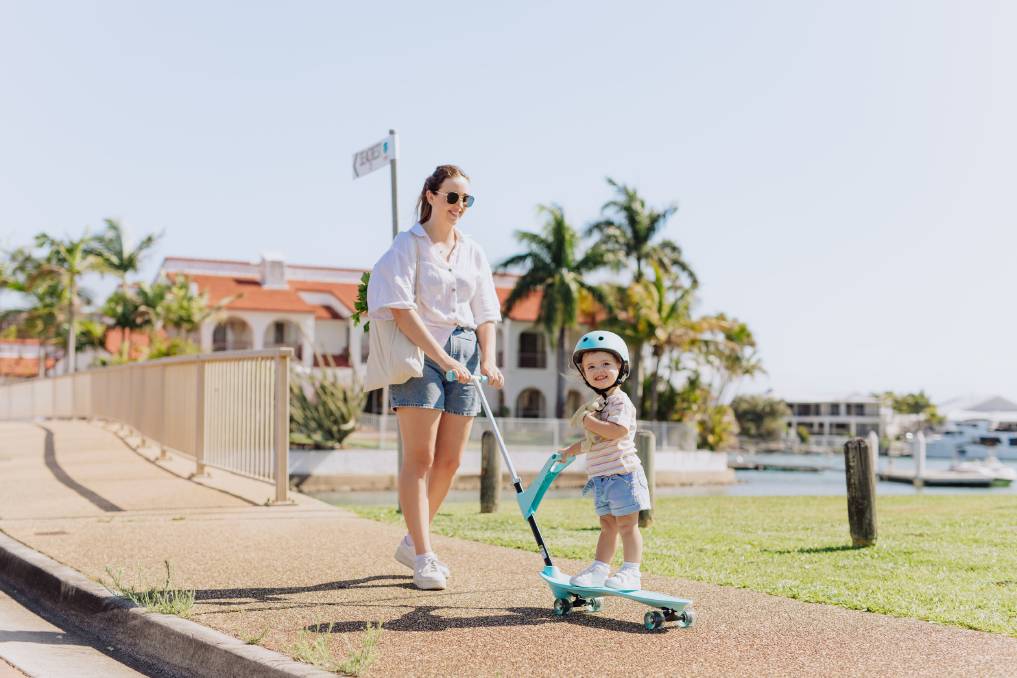 NO PRAM REQUIRED: Your little one will love a daily outing if they are learning how to conquer skateboarding.

Dear reader, thanks for your interest in this article. We just wanted to let you know that while it has been written independently by one of our journalists, some of the links in this post are affiliate links, which means if you click through, ACM may earn a commission.

What a great invention this is. Something that all families are going to love is the Australian-founded Ookkie. The OOKIE is the world's first children's learner skateboard and it is taking on the global market after it's breakout year in 2021.

The Ookkie is a learner skateboard, designed to help toddlers safely learn to skateboard, while also developing balance, stability and confidence. DESIGNED FOR CHILDREN: The Ookkie Skateboard has been designed with toddlers in mind, with handles for the rider and their parent/guardian too.

Parents all around the world have loved seeing the way their child has developed their balance and core stability as a result of riding the Ookkie. PROGRESS; The board progresses with child's development, meaning as they gain confidence and grow in ability, they can remove the different handles and progress to ultimately skateboarding by themselves.

For many young families, the Ookkie is used as a genuine alternative to the pram, giving toddlers an active role on the family walk, rather than just passively rolling in the pram. Children as young as eight months have got on the board, and have been shredding the sidewalk before they could even walk.

Bankz first got on the Ookkie at eight months and is now skateboarding by himself at only 15 months old.

When it comes to afternoon walks, families have been saying goodbye to the pram and hello to the Ookkie Skateboard.

Founded in 2016 by Aussie Dad, Daniel De Gaye, the Ookkie Skateboard was created with one goal in mind - to get children learning to skateboard earlier. As a skateboarder himself, Daniel wanted to teach his son how to ride a board safely whilst also developing fundamental balance, stability and confidence.

Daniel, a floorer by trade, had the initial idea after teaching his three-year-old to skateboard. SHREDDING THE PAVEMENT: The Ookkie Skateboard hs been a great success with children of all ages.

"We got our son a skateboard as a gift, but we found it super hard for him to get involved with the board, so I ended up pulling him along one day.

He wasn't enjoying it at that moment, and then I had the idea that I needed to push him without holding him."

The business grew through social media and digital advertising, with growth continuing to snowball as parents share their children's successes on the Ookkie. Through the height of the Covid-19 pandemic, sales of the Ookkie Skateboard spiked, with the Ookkie providing a great option to get outside for family walks.

In July of 2019, Ookkie joined forces with Australian Skateboard business, Absolute Board Co., best known for the Penny Skateboard, the original plastic skateboard. STAND OUT IN A CROWD: Ookkie has just released a range of NEW colours.

This was the first step in taking the Ookkie skateboard global with the brand beginning trading online in the US in September of 2019.

Seeing great success in Australia and the United States, the company launched their Asia operation in October and has its sights on launching in Europe and the United Kingdom in early 2022.

Could soon be the greatest invention ever to come out of Australia. The Ookkie Skateboard is just perfect for you and your family to enjoy the great outdoors while helping your little one's learn valuable skills.