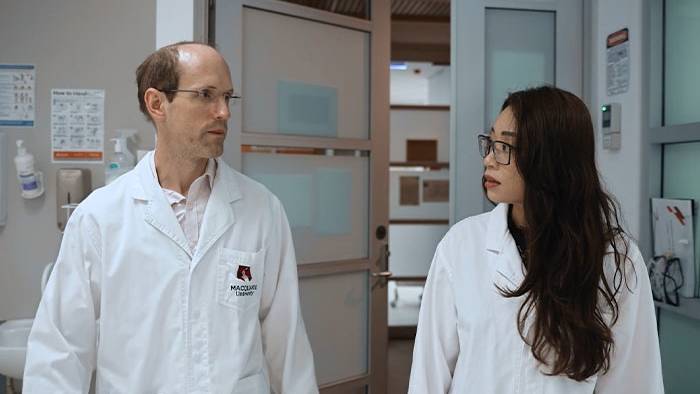 HOMEWORK: Lars Ittner and Yazi Ke say the lockdown was a perfect opportunity to brainstorm their research. "We had unlimited time to bounce ideas off each other, from breakfast to when we were brushing our teeth at night."

"As soon as I saw the possibilities emerging here, my brain went wild."

A husband-and-wife team of dementia researchers has found that stem cell technology has progressed to a point where they could potentially use it to create miniature brains.

Lars Ittner and Yazi Ke from Macquarie University already using the "brains" - pink clusters of neurons about a centimetre across - in studies ranging from investigating neurodegenerative disorders like Alzheimer's and motor neuron disease to looking at the effects of COVID-19 on the brain.

"Until now, the technology to produce such mini-brains was not reliable - one was not the same as the next," Professor Ittner said.

"I always wanted this technology to work to enable new Alzheimer's research, but it was Yazi who had the vision behind it.

"We had been scanning the latest advances in systems and technologies for some time now, and last year it became clear that the advance we'd been waiting for had been made.

"Now we can take a single sample and produce thousands or hundreds of thousands of cells that are all exactly the same.

"We create a hundred or a thousand mini-brains at a time, then scoop out as many as we need for analysis."

With Associate Professor Ke's background in molecular neurobiology and her spouse's clinical background, the pair makes a formidable team, complementing each other with their individual strengths and specialties.

Ke said it took just three months from the time they started work until they had their first dish of mini-brains.

"It could be a downside for some people, but we never stop talking about work," she said. "During lockdown, we had unlimited time to bounce ideas off each other, from breakfast to when we were brushing our teeth at night.

"Seeing those neurons firing for the first time when we perfected the process, it was a combination of disbelief and a little bit of awe that we had managed it so quickly, because nothing is quick in dementia research."

The lab now has incubators full of the cell clusters reflecting different donors, cell types, diseases, and underlying genetics, and with CRISPR gene technology, the scientists can introduce a single mutation at a time to test the effect.

They have already put their advances to use. One of the early experiments they carried out in collaboration with researchers from the Queensland Brain Institute using the mini-brains was looking at how they reacted to SARS-CoV-2, the virus that causes COVID-19.

"The covid findings are quite frightening," Associate Professor Ke said.

"The neurons were fusing to each other. The virus is obviously affecting them and their interactions, but we don't yet understand the full impact of covid in neurology, or what effects it could have in the long term."

Reduced need for research on mice

One of the reasons Ittner and Ke were so keen to find a way to advance stem-cell technology was to reduce the reliance of their research on animals.

Mice have long been used in dementia studies, a practice that comes with problems of its own: as well as the ethical concerns associated with animal research, a treatment that works for mice does not necessarily produce the same results in human subjects.

"Having access to complex human neuronal networks brings us a step closer to the patient," Professor Ittner said. "The mice might answer a certain area, but with stem cells, we can do anything.

"Also, we've been working with mice for the past 15 years, and we're known internationally for that, but I'm always looking for the next new exciting thing.

"As soon as I saw the possibilities emerging here, my brain went wild. We're in this new, uncharted territory, and all these ideas were popping into my head, ways to solve problems we've failed to address before.

"We hope this will enable new discoveries in dementia and other neurodegenerative diseases, like how they occur and how they can be treated."

With so many exciting avenues of research ahead of them, the pair's main goal is a humble one.

"We just would like to be able to make a difference," Associate Professor Ke said.

"We would like to see that, together, we can achieve something in our lifetime."