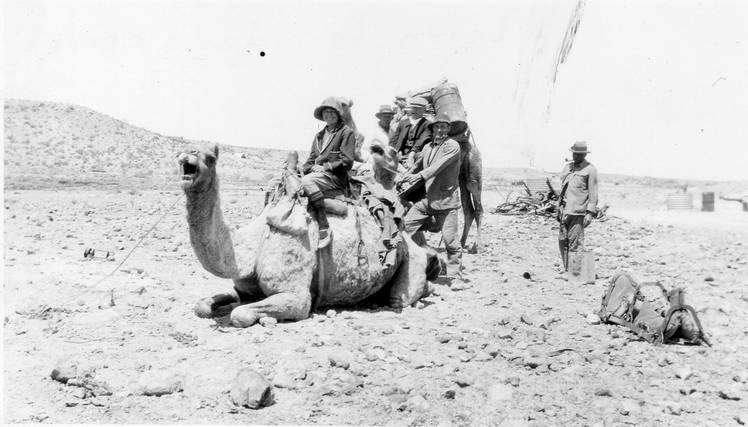 GEM IN HER OWN RIGHT: Minnie Berrington, pictured learning to ride a camel, ventured out into the world at a time when career options were limited for many women.

Former London secretary became first woman to mine for opals at Andamooka in SA.

Minnie Berrington was a 29-year-old former typist not long arrived from London when she found the love of her life on a train in 1926.

"A golden light suffused everything," she wrote. "The air was so clear it seemed to sparkle and the hills were as sharp-cut as the ones that looked so impossible on the stage... The enchantment of that golden serenity was so complete that I knew I would never willingly live in a city again."

Minnie was a passenger on the Afghan Express and had set eyes on the South Australian outback for the first time.

The romance of it and the opals hidden beneath its ochre vastness consumed her for the rest of her 101 years.

Minnie, the subject of an upcoming documentary by film-maker Lara Lukich, was the first woman to mine the Andamooka opal field.

She came to Australia with her younger brother Victor. He landed an adventurous job travelling the far reaches of SA with a hawker and "getting to see the true Australia", Lara said.

"Minnie was stuck as a domestic helper in Adelaide, which wasn't very exciting for her. So when Victor wrote to her and sent an invitation to come up on the Afghan Express, she told her employers she'd be going for a couple of weeks and never went back.

"I think they were tired of England, the dampness, the weather. And you see the posters from that era, saying come to sunny Australia."

That warmth extended to their arrival in Coober Pedy, where they soon made friends with the miners, who showed them ropes about how to dig for opals. Their life's die was cast.

"Minnie had a passion for these stones and became hooked," Lara said. "I think that was the first time in her life she really realised there was a different way she could live."

Lara says Minnie was like many women of her time and station and had limited life options. "But here she had sovereignty over her life, which is pretty amazing."

In later life, Minnie wrote an early memoir, Stones of Fire, but she wanted to call it "My Dally in Wonderland", Lara said, "because that was how she actually really saw it".

Not that it was a fantasy. Opal mining was hard yakka and no place for a wilting lily when Minnie arrived in Andamooka in 1934 a few days after Christmas, in roasting 43-degree heat.

"She was only five foot two but knew how to use a pick and shovel," Lara said.

She needed to. Whereas at Coober Pedy, opals might be found eight feet below the surface, they were deeper at Andamooka - up to 28 feet, Lara said. "It was a lot tougher."

There was little in the way of machinery in those days. Access to shafts was by hand-cranked windlass, not the power winches of today, and buckets were hauled out by hand.

"Minnie was a gutsy, incredible person," said Lara, herself the daughter of a former Andamooka opal miner.

"And yet when you read her book, she was kind, intelligent, compassionate, warm, humorous and very giving.

Later on, Minnie took part in the war effort at home, became Andamooka's first postmistress and was a census taker.

After leaving the opal fields, she and Victor retired to a stone cottage in Quorn, on the doorstep of the outback she so adored.

They evidently expected to live out their days there, but sadly, Victor - 11 years Minnie's junior - died suddenly in 1965.

The reason is not known. But Lara believes Minnie, who was devoted to him, lost her life's compass at that point.

By the time she died in 2001, her opal fields legacy had been forgotten, the film-maker said, adding she was shocked she had never heard of her while growing up in Andamooka.

But with the help of friends, team members and experts like Stuart Wattison, who has delved deeply into Minnie's life, Lara is learning more all the time.

Recently, she was excited to be contacted by a Canadian cousin of the Bessingtons who had found out about the project via Lara's Facebook page and had a great deal of information to share.

Lara said places and scenes from Minnie's past will be recreated when filming begins. The old Andamooka post office where Minnie was in charge, today a shop, will be reimagined to appear as it was in the 1930s and '40s.

"We've also identified a couple of places where she lived. One got knocked down, sadly, but we believe there is a semi-dugout behind the guesthouse that she lived in."

This is a type of cottage with part of it cut only a quarter or half-way into the side of a slope. While not exactly luxury accommodation, it was a vast improvement on the flimsy, dusty, fly-bothered tents Minnie initially stayed in.

"It's owned privately but hopefully that will get fixed up for the film."

In a novel approach, Lara says the documentary will amalgamate real-life footage and dream-like animation sequences.

This is "to illustrate some of the more poetic instances she writes about in the book, where she sees herself as a kind of Alice in Wonderland".

"We want to invite you into the world of Minnie's mind; into the magic of what she saw, and how she experienced the outback."

To find out more about the film or perhaps make a contribution, visit www.theminnieberringtonproject.com