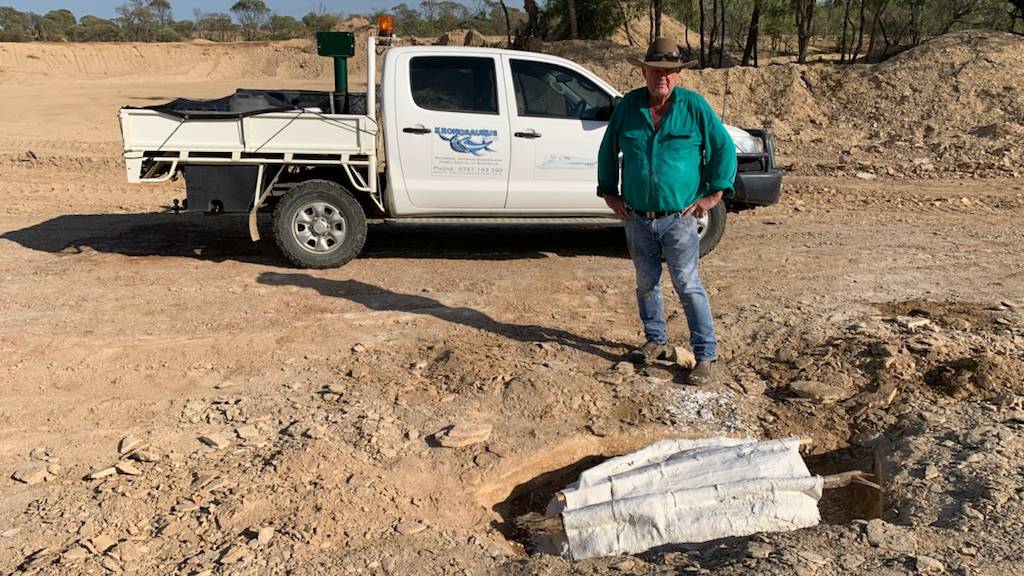 The fossil hunting grounds near Richmond have thrown up another remarkable discovery.

The fossil hunting grounds near Richmond in northern Queensland have thrown up another remarkable discovery.

Ichtyosaurs (from the ancient Greek word for "fish lizard" are large extinct marine reptiles resembling modern fish or dolphins that lived from 250 million years ago to around 90 million years ago, at a time when the area around North West Queensland was part of a vast inland sea.

In 2018 an Ichtyosaur the "size of a car" was uncovered and now significant portions of another have been found.

Mr Ievers told the ABC the museum's new paleontologist Kevin Peterson was fossicking at the site when he discovered "a fair chunk of bone".

"We went out to the site to have a look and after digging around it we discovered it was the head of a marine reptile called an Ichtyosaur," Mr Ievers said.

"These heads are typically one meter in length so this is of a large reptile five or six metres in length."

The Richmond team carefully extracted the fossil and took it to the museum's preparation room where work commenced on it to further identify it and determine its significance.

Mr Ievers said the fossils found around Richmond are 112 million years old and they found a significant portion of the animal in the new find.

"We found its snout, we found teeth and we also found the jawbone," he said.

"Preparation work is long and tedious so it will be quite some time before it goes on display in Kronosaurus Korner."

The most famous find at the museum is remnants of a kronosaurus that gave it its name, found on a property near Hughenden

This fearsome marine reptile grew to 10m in length and was an apex predator preying on turtles and plesiosaurs.

Another major find was discovered in Richmond in August this year of Australia's largest flying reptile, a pterosaur with an estimated seven-metre wingspan that soared like a dragon.

This story first appeared on The North West Star.