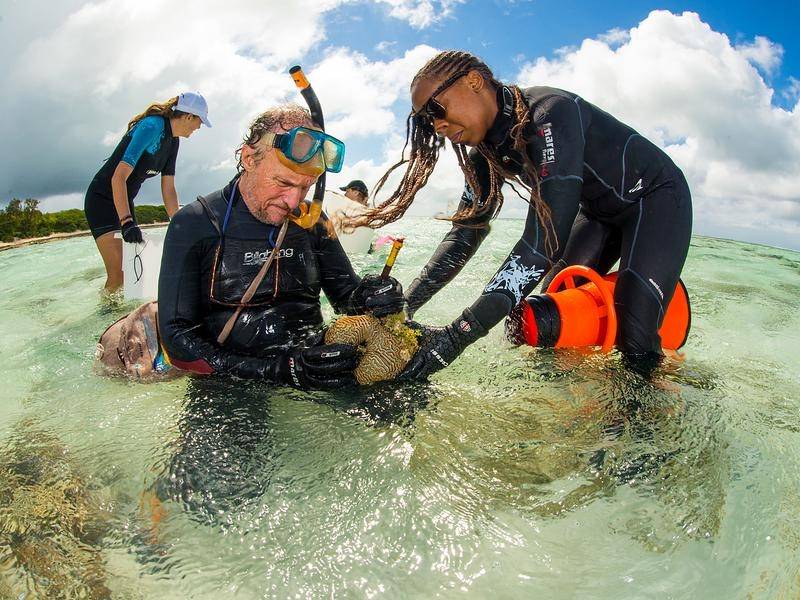 The Great Barrier Reef's first IVF coral babies are all grown up and have become parents in an Australian first that could help the natural wonder survive the...

The Great Barrier Reef's first IVF coral babies are all grown up and have become parents in an Australian first that could help the natural wonder survive the ravages of climate change.

Scientists are celebrating after 22 coral colonies created during the reef's first coral IVF trial in 2016 themselves spawned with last month's full moon.

Countless new coral babies are now making themselves at home in a lagoon off Heron Island, with others likely to have ridden the waves and tides to stretches of reef elsewhere along the Queensland coast.

His next challenge is it scale it up - quickly - so it can be used across large expanses of the reef, which is losing an alarming number of sexually mature corals to climate change-driven bleaching events.

"We've got to be ambitious. We can't wait for action on climate change, for the world to wake up to what's really going on," Professor Harrison said.

"We've got to hit this now. It is critical to get to large scales within the next few years ... so it becomes a seamless part of how we manage the Great Barrier Reef in the future."

Coral IVF involves harvesting the bundles of eggs and sperm breeding corals release during a short window towards the end of each year.

The spawn is then confined in sea pens, something that boosts fertilisation rates and protects the resulting coral larvae from being eaten or swept into the open ocean where there's no reef to attach to.

After about a week, the larvae are released in high concentrations on degraded reefs, dramatically boosting the chance of them taking hold and growing.

Prof Harrison said some parts of the Great Barrier Reef no longer had enough breeding corals to naturally recover from bleaching events and crown-of-thorns starfish invasions.

"Every few years, when reefs are in a healthy condition, you get this massive inflow of larvae across the reef system and you suddenly end up with lots and lots of coral everywhere," he said.

"But because we are losing - and have lost - so many healthy breeding corals, not all of the reefs are recovering naturally."

Now that Prof Harrison has proof his technique works, he is focused on how to get coral IVF out of the research phase and into the operational phase.

A range of new sea pen designs are now being tested, including one with a flap that can open and close, allowing it to double as a spawn collector and growing enclosure for coral larvae.

A crucial target - to cultivate one billion IVF larvae annually - might only be a year or two away.

"When we get to that size we can then start to think about restoring areas of reef that are many many hectares in extent, or potentially, hopefully at a kilometre scale," Prof Harrison said.

Ultimately he wants to see well-designed, easy-to-use coral IVF gear in the hands of anyone willing to use it, from marine park managers to tourism operators and boaties.

"There's tens of thousands of people out there who really want to get involved. If we can do that over dozens or maybe hundreds of reefs in the future, then we can start to scale it up in a different way.

"We're trying to buy time for corals, to rescue the genetic diversity present in populations that survived the last three catastrophic bleaching events.

"We know they are more heat tolerant than the ones that died, and we know that heat tolerance can be transferred across to the the larvae."

"We need to reduce emissions as well as pioneer new solutions to help reefs recover and adapt to the warmer temperatures we're already locked into," Ms Marsden said.