CHAMPION OF THE VULNERABLE: Abla Kadous with her 2022 NSW Senior Australian of the Year Award. Photo: NADC/Salty Dingo

No retirement in sight for award- winner Abla Kadous.

Abla Kadous doesn't believe in retirement, there's too much work to do and too many vulnerable women to help.

The indefatigable 72-year-old spends her days at Australia's first welfare service for Muslim women - the Islamic Women's Welfare Association, a not-for-profit organisation in Lakemba, which she helped create and where now acts as president.

Lakemba in south west Sydney, is a suburb with a rich migrant history where currently around 50 per cent of residents identify as Muslim.

Abla leads 50 other volunteers and staff at the thriving organisation and impressively, she raised enough money through sewing, cooking and sourcing items to sell, to buy a state-of-the-art function centre for IWWA.

Abla, a mother of five and grandmother of 10 with two more on the way, has been named 2022 NSW Senior Australian of the Year and says she is delighted to receive the award, because it shows that Australia believes in giving everyone who works hard a fair go, no matter how they look or how they dress.

Born in Egypt and moving to Australia, with her family when she was almost 19, Abla has always been a high achiever.

At age 13 she took up rowing in Egypt as her father used to coach a men's rowing team. She was soon a champion, beating women older than herself. It's a sport she took up again after being in Australia for a couple of years joining a club in Leichhardt.

Sport has remained important to her and she encourages young women to take up sporting activities, while also organising sports for the many children who come to the centre.

With Abla at the helm, the IWWA helps Islamic women feel welcome in their communities. It offers anti-discrimination forums, school-readiness programs, youth camps, cooking classes and events. It also provides food and other essentials to people in need. Abla counsels women who are having family or personal issues and refers those she cannot help, onto other support agencies. 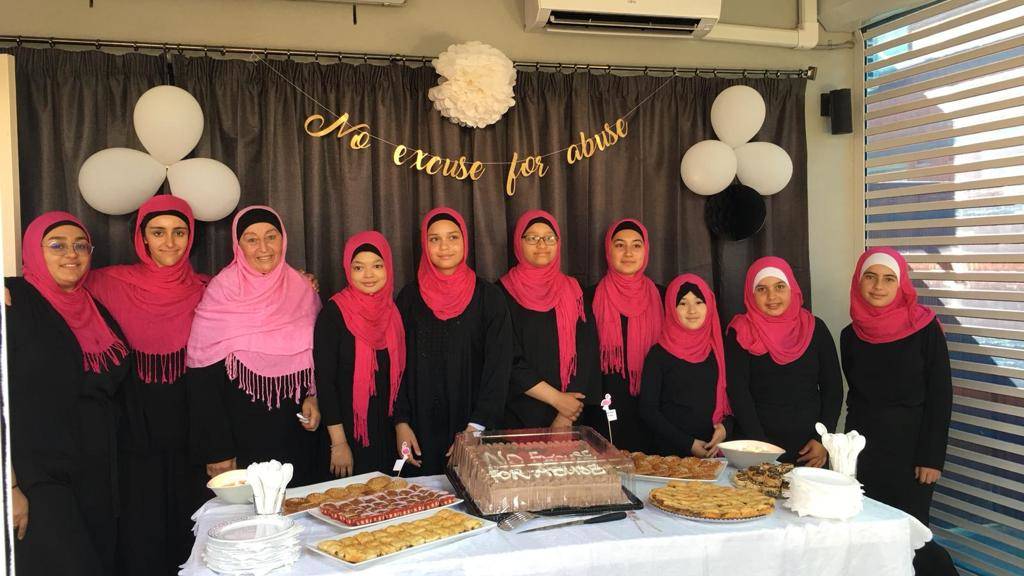 Abla Kadous (third from left) with some of the volunteers from the Islamic Women's Welfare Association at a VIP afternoon tea for No excuse for abuse week.

"We cater for Muslims from all over the world," said Abla. "We have 40 nationalities coming to our centre. I earn their trust and try to help anyone in need.

"Women come to our centre because they come from overseas and they face many problems. We want to be here for them and help them settle in. They meet other women, they exchange knowledge, become friends and develop a good network."

Many of the women are separated from their extended family. Abla tells the story of a pregnant woman who was distressed because she would not have her mother with her when her baby was born. Abla spent 12 hours holding the hand of the young women until the baby was delivered.

Women come to our centre because they come from overseas and they face many problems. We want to be here for them and help them settle in. They meet other women, they exchange knowledge, become friends and develop a good network. - Abla Kadous

One of the things Abla noticed when she first came to Australia was how friendly everyone was. Strangers would chat to her on her way to college. However, she felt a change when in 1984 she began practising Islam and wore the hijab.

"Some people are affected by discrimination because of what they wear," she said.

"This is one of my messages. Just to explain to people that we can look different and dress differently but in our hearts we are the same and we have to accept each other.

"A lot of men come to me and say 'thank you for bringing this happiness into our home'. It takes a lot of courage from the husband.

"I believe when you give out good, you get good in return."

The IWWA caters for approximately 150 women and 300 children each week and has a thriving seniors' group. It also holds information days, morning teas and works with other community groups.

I believe when you give out good, you get good in return. - Abla Kadous

Abla will now go, with other state and territory award winners, to the national Australian of the Year Awards in Canberra in January.