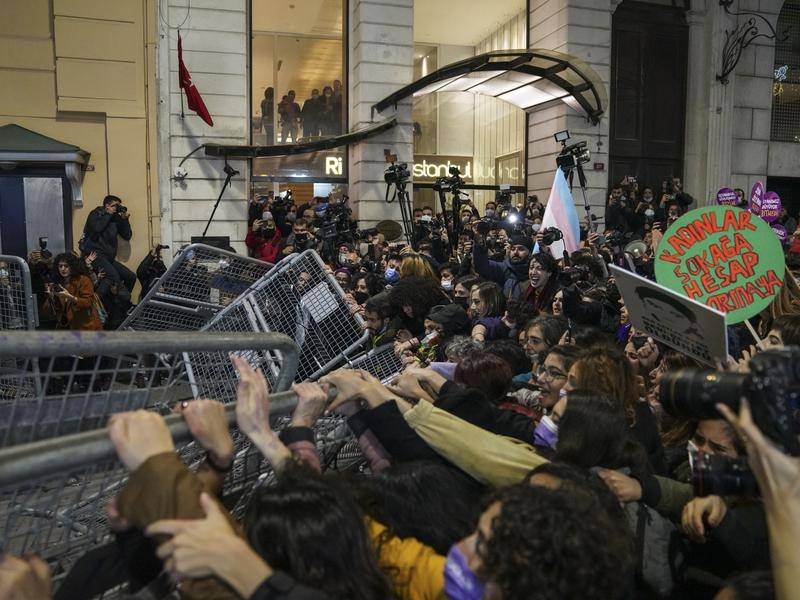 Thousands of protesters have attended a demonstration in Istanbul against gender violence.

Riot police have fired tear gas to disperse demonstrators in Istanbul protesting violence against women, some chanting "government resign", nearly five months after Turkey withdrew from a treaty on the issue.

The group of several thousand, mostly women, marched to the city centre's Taksim Square, blocked off with barriers amid a heavy police presence.

Police fired the gas and scuffled with protesters after urging the crowd to disperse.

The protest, held to mark the international day for the elimination of violence against women, coincided with other small anti-government protests this week over the sharp slide in the value of the lira currency.

The protesters chanted and help up banners, demanding urgent action against gender-based violence in Turkey.

"We are not silent, not afraid, not obeying", chanted the demonstrators, who rushed at police barriers.

At the start of July, Turkey withdrew from an international treaty to combat violence against women, known as the Istanbul Convention and negotiated in Turkey's biggest city in 2011, in a move strongly criticised by Western allies.

Turkey's President Tayyip Erdogan announced the withdrawal in March, saying Turkey would instead use local laws to protect women's rights.