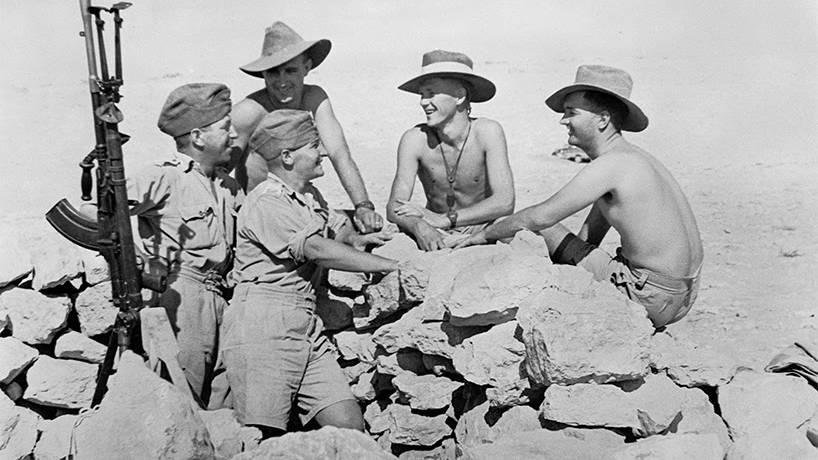 BROTHER RATS: Australians and Poles formed a tremendous bond amid the heat, sand and danger of WWII North Africa.

A special connection between the Rats of Tobruk and the Polish troops who succeeded them will be remembered at a free live-streamed event at the Shrine of Remembrance in Melbourne on November 27.

Dr Mark Johnston, Professor Marek Wierzbicki and Lucyna Artymiuk will discuss the shared experiences of the Australians and Poles in Tobruk and how the friendships forged influenced Australia's postwar migration policies.

Between April and November 1941, 14,000 Australians were besieged within the Libyan fortress of Tobruk by a powerful Italo-German army.

Ordered to deny Tobruk to the enemy for eight weeks, the men held out for five months.

Nazi propagandist and broadcaster Lord Haw Haw (William Joyce) began describing the besieged men as living like rats in dug-outs and caves - an insult they adopted as a badge of honour.

Exhausted, the Australian troops were progressively withdrawn from Tobruk between August and November 1941.

Other troops including the Carpathian Brigade, comprising soldiers who had escaped Poland after its conquest by the Nazis and Soviets in 1939, relieved them.

It was the Poles who finally ended the siege when they captured Acroma and linked up with the British 8th Army.

In recognition of this feat, the Australians shared with the Poles their most venerated title. Henceforth, the Poles too would be Rats of Tobruk.

Between 1947 and 1948, Australian veterans of Tobruk helped sponsor the migration of 1500 Polish soldiers to Australia when it became impossible for these men to return to their homeland following the Soviet occupation.

Some were among 280 Polish ex-servicemen who came to work in the Hydro-Electric Commission's construction camps in Tasmania, where many of their descendants remain.

The Rats of Tobruk: An Enduring Australian and Polish Friendship will be available to view on the shrine's website, Facebook and YouTube channels (for links to all three, click HERE). It begins at 7pm.