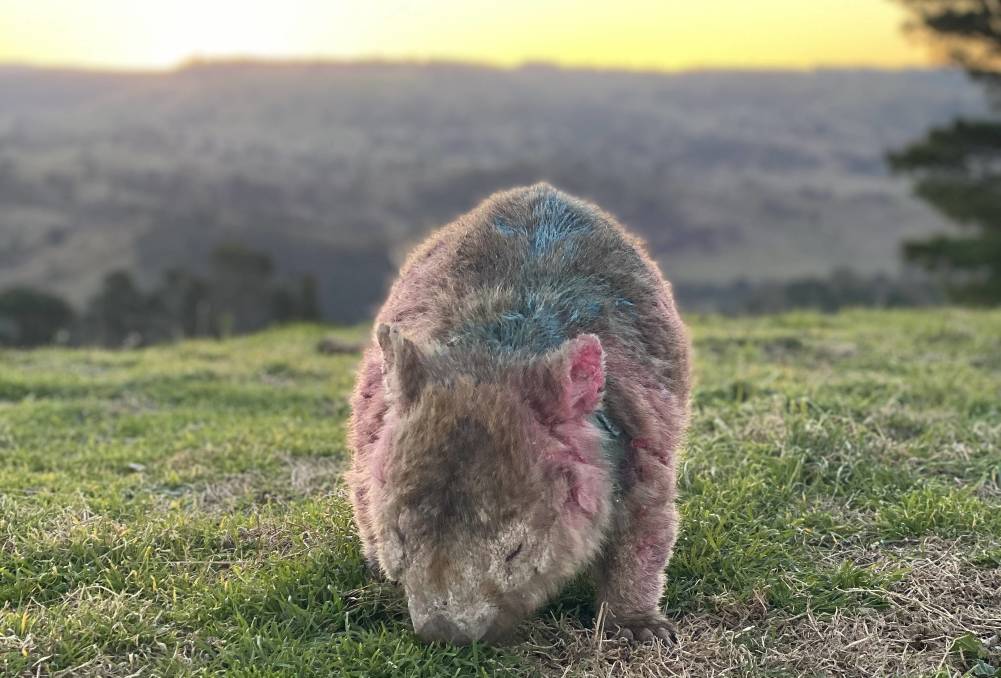 If untreated, a wombat will die an agonising death from mange. With limited government support, volunteers are heading out into the bush to care for this iconic species.

Melina Budden is crouched in front of a wombat hole topping up the treatment dose on a burrow flap.

"If the wombat comes out this will go down it's back," Melina tells me. "And if a wombat goes forward it will come down the rear side of them."

The flaps are made from pieces of corflute "for sale" signs donated by the local Century 21. They swing on a metal frame that's spiked into the ground at the entrance of the wombat's home. A Vegemite lid is fixed into a slot in the flap.

Melina is topping up the Vegemite lid with the chemical Moxidectin, also known by its brand name Cydectin.

The medication has proven successful in the treatment of mange, a parasitic infestation which disfigures wombats. Their skin becomes concrete with scabs and fly blown cracks. They lose their hearing and their eyesight. They essentially rot to death -- often dying from secondary infections, starvation, or from wandering blindly onto the road. 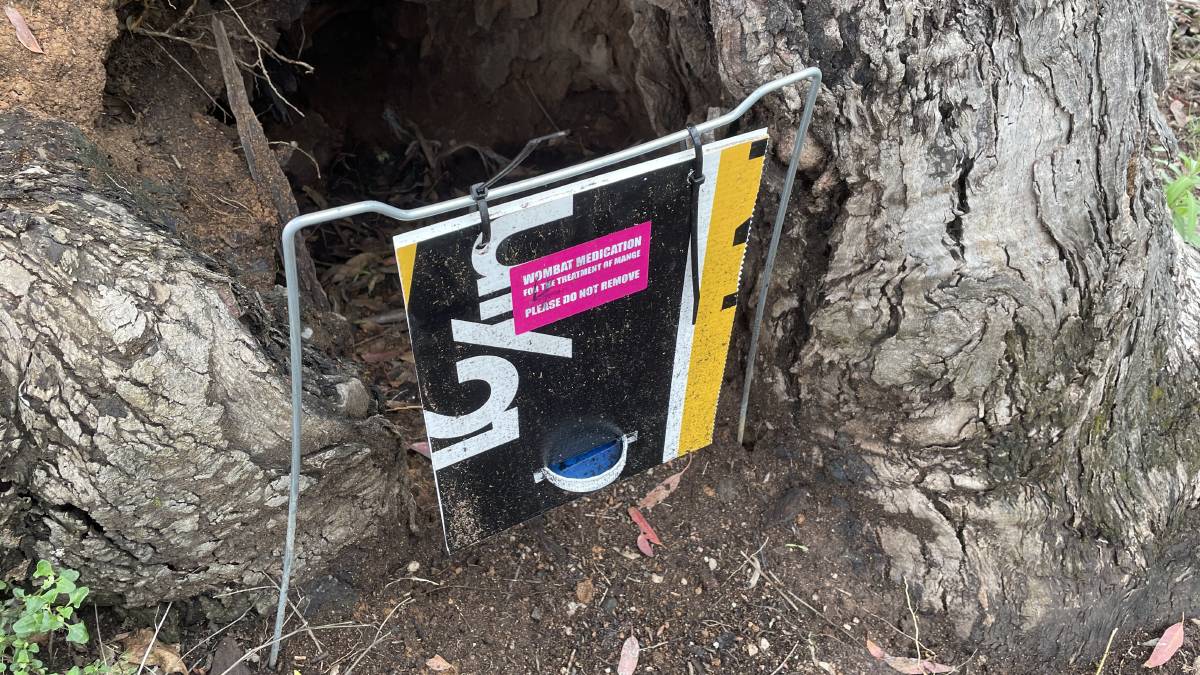 The simple yet effective burrow flap design has been adopted by many wildlife groups. Photo: Laura Corrigan

The first time Melina saw a mangy wombat was in Wolgan Valley, near Lithgow, in NSW's Central Tablelands, where she was helping wildlife after the fires.

She says she was devastated by the sight of it. She didn't know what to do.

"So I ended up picking up a 40 kilo wombat and I drove it 150km to Taronga Zoo. Not many people would do that." 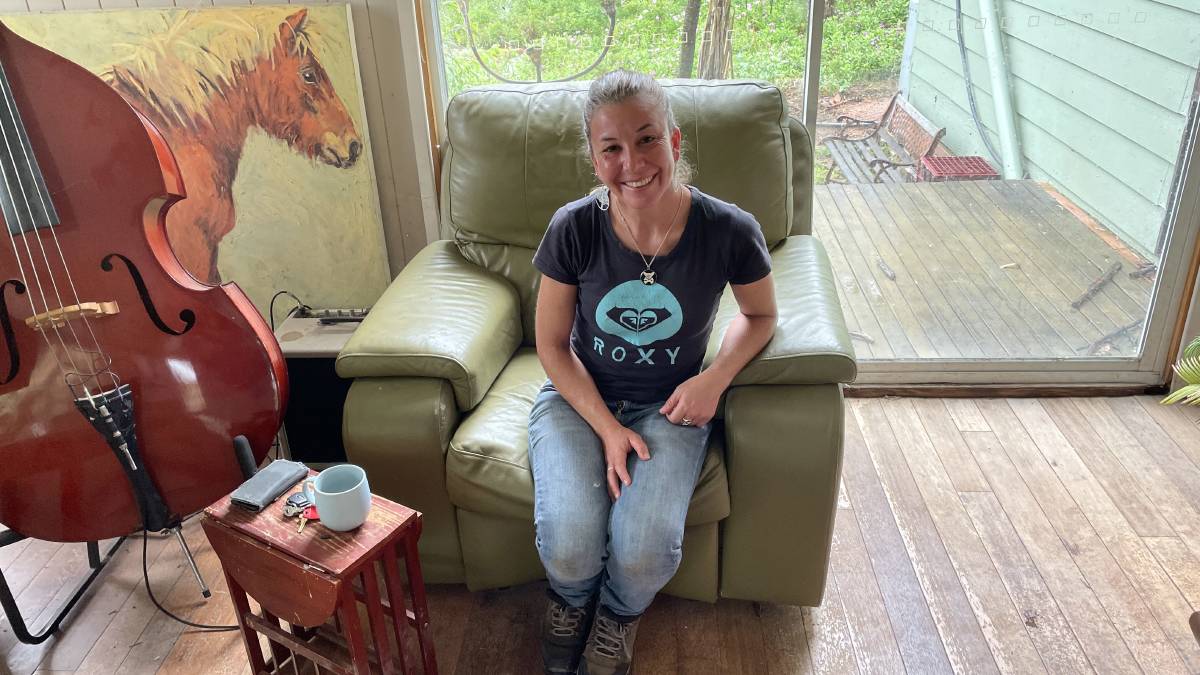 Melina is an ecologist and zoologist, she's worked for National Parks and the Department of Planning, Industry and Environment. But today she's a wombat warrior, part of the NSW Blue Mountains Wildlife Volunteer Group, giving up her time and money to help wombats.

She lives in Lake Macquarie, in the state's Hunter Region, and travels the three and a half hours here to Megalong Valley in the Blue Mountains each week to check restock burrow flaps.

She tells me she does it because she cares too much. "I think once you see the pain that these animals are in, and when you see that the government's doing nothing, you just step up," she says.

Sarcoptic mange affects over 150 different mammals around the world including humans. It's believed it was brought to Australia from Europe on convicts, dogs or maybe foxes. Wombats are particularly vulnerable to mange with a 100 percent kill rate if left untreated.

It's a grey day deep in the Blue Mountains where Melina is showing me her work. We're on the Allen's property, about two hours west of Sydney. Billows of fog drape down the sandstone escarpments that overlook the valley -- phantom waterfalls. 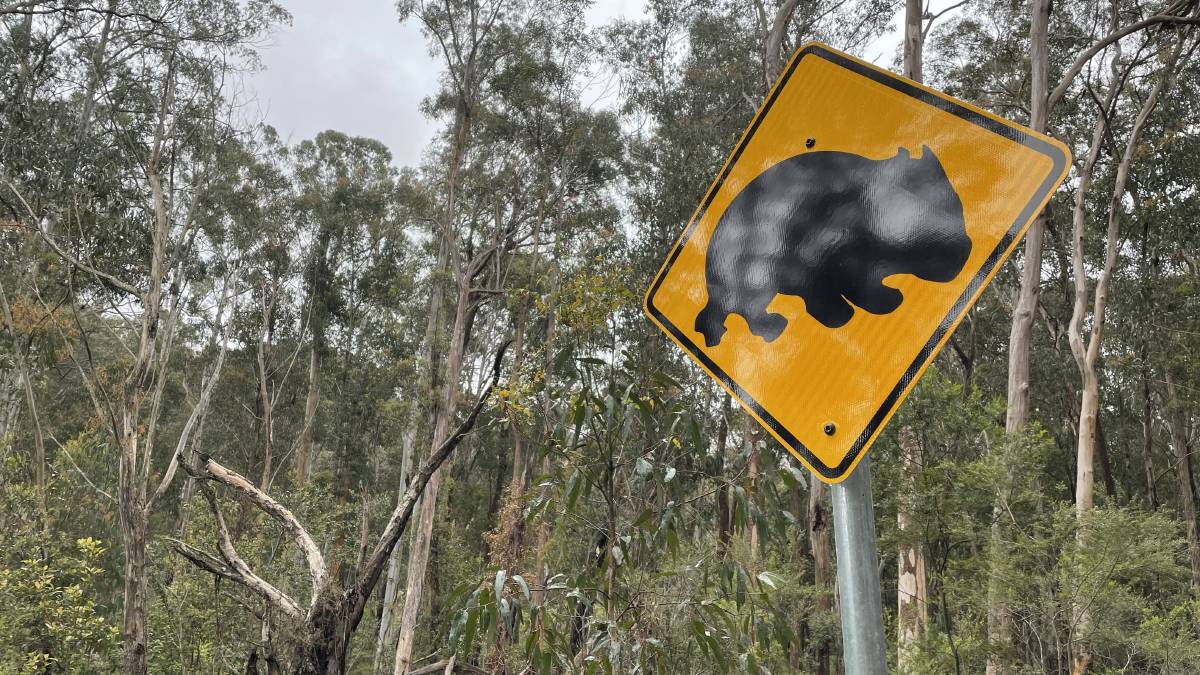 Wombats are abundant in Megalong Valley in the Blue Mountains of NSW. Photo: Laura Corrigan.

Property owners John and Jill Allen are with us as we go burrow to burrow. John points out a collapsed burrow system near the creek.

"It's the reason why you find a lot of farmers don't like wombats. It's because it does cause quite extensive damage," he says.

There's a depression of about three metres by two, and one and a half metres deep. Out here near the creek it doesn't affect the Allens' cattle too much. But if a wombat starts digging too close to the Allens' vines, or in a prime paddock, they'll fill in the holes, forcing them out. 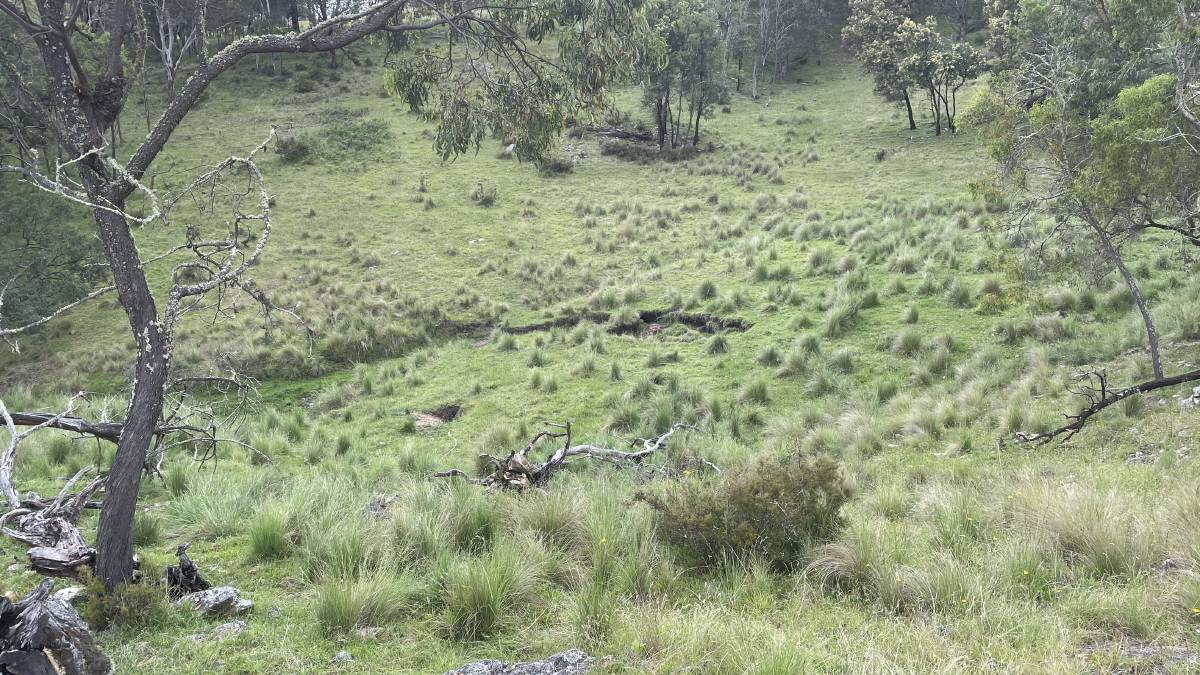 Melina is quick to point out that wombats are good for the soil.

"From an ecological perspective, wombats are fantastic because they turn the soil, they oxygenate the soil, and they help the nutrient cycle and the ecosystems."

Even if the marsupials can be a bit destructive, John and Jill were anxious to get them help when they noticed them getting sick. 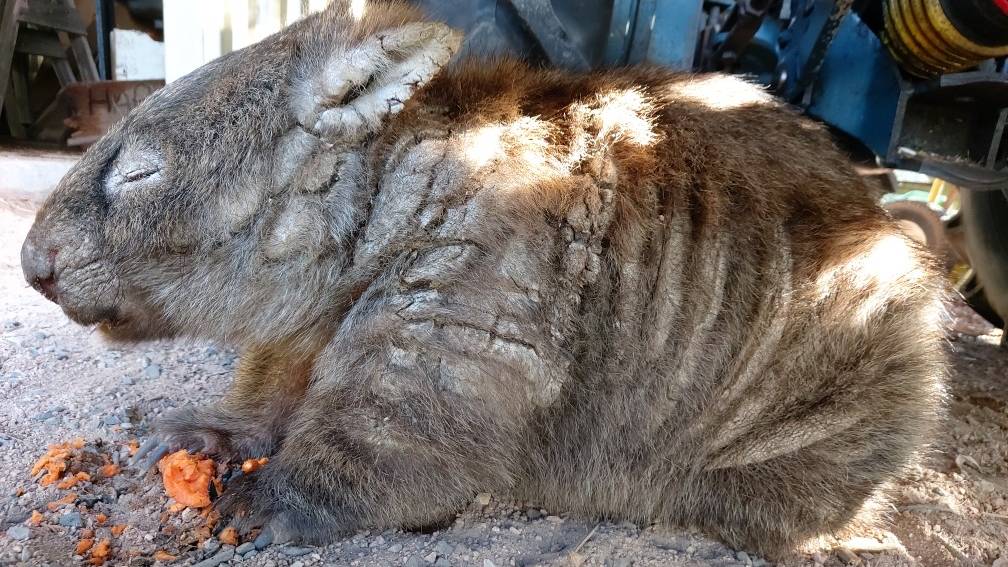 Marki the wombat was treated for mange, successfully in captivity, which is rare. Photo: Supplied

Jill says she's seen a big difference since Melina and the other wombat warriors have been here. They haven't seen any sick wombats in the last few weeks.

But not all wombats are so lucky. A wombat named Fritz was put down recently. He was old and emaciated with mange. He couldn't walk, he was suffering. So the decision was made euthanise him. 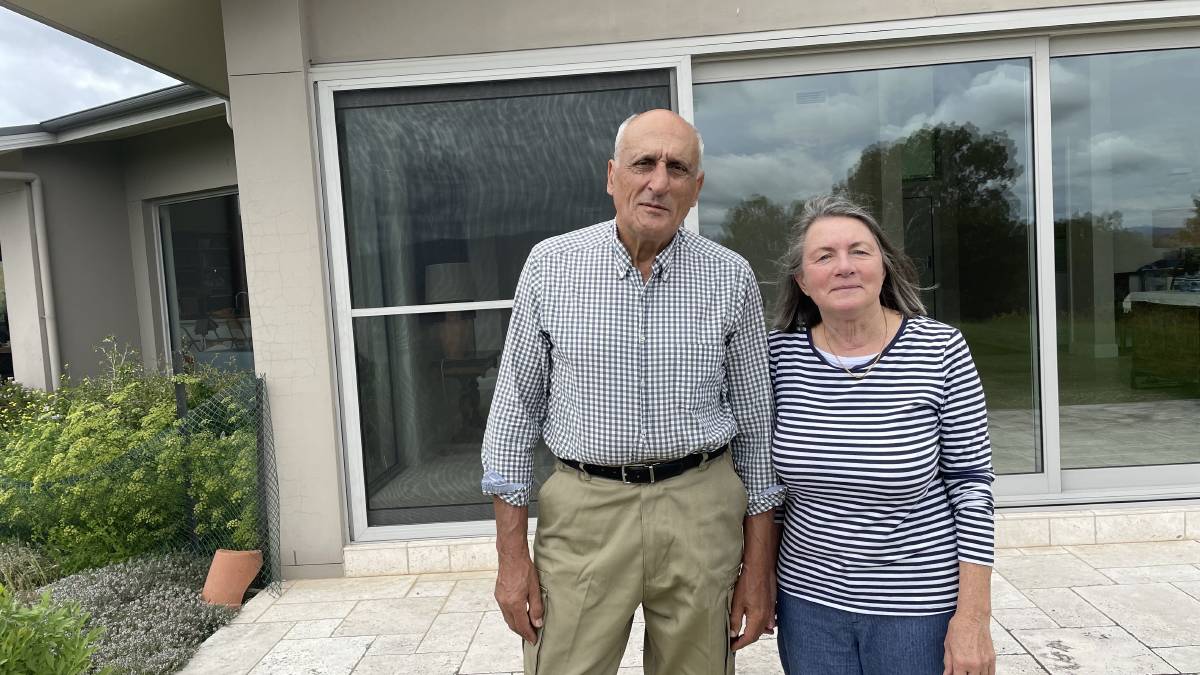 John and Jill Allen have seen an improvement in the health of the wombats on their property. Photo: Laura Corrigan

Over the other side of the Blue Mountains in Kanimbla I meet Anna Culliton, a WIRES carer who treats wombats for mange in the Central West.

Wombats don't always do well in captivity but Anna was able to successfully treat a wombat for mange at home in a specialty built enclosure. His name is Marki.

"There's already an established borrow in that enclosure and he went down it. So I kind of had a terrible feeling that he'd just curl up and die. But he didn't. He came out, he became my friend."

When he was healthy again she released him. Three months later he turned up, reinfested with mange. 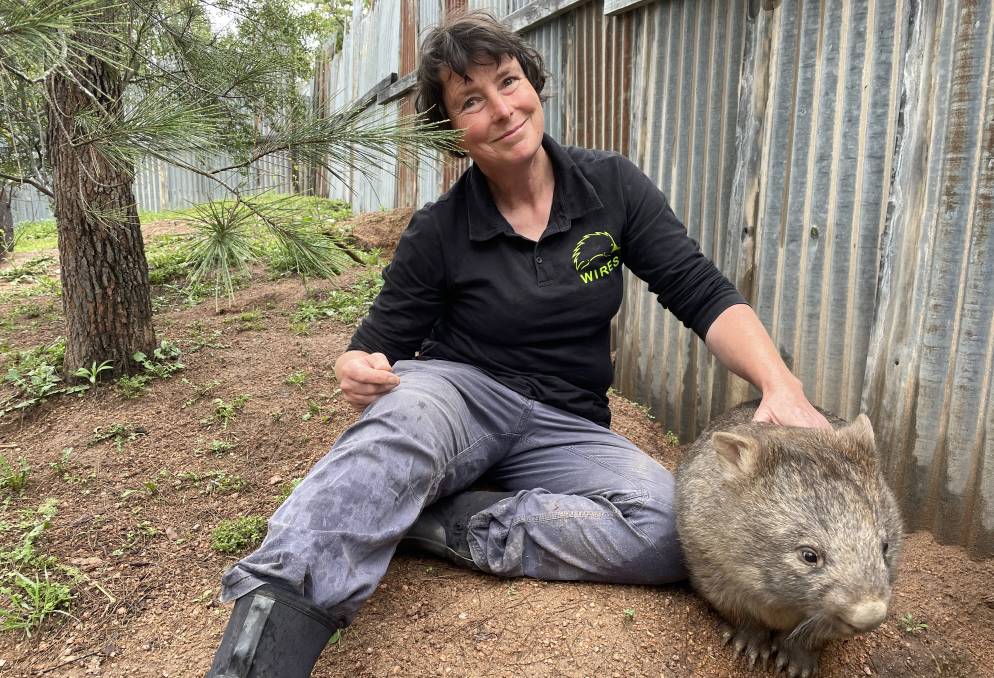 Anna has raised 16 orphaned joeys whose mothers have been killed by mange or cars. She treats wombats because she wants to create a mange free world in which her adopted wombats can live.

"It's a critical problem," she tells me. "I don't think there's any wombat population that's free of mange."

It's not clear why wombats are so susceptible to mange. It could be that they don't have a natural resistance to the foreign mite, or that burrow sharing plays a factor in the transmission.

Mange has probably been around for two centuries and wombats aren't extinct. It's considered an animal welfare issue not a conservation one.

In local populations however, mange has been devastating. In Narawntapu National Park on the north coast of Tasmania the wombat population was reduced by 94 percent over 7 years due to mange. 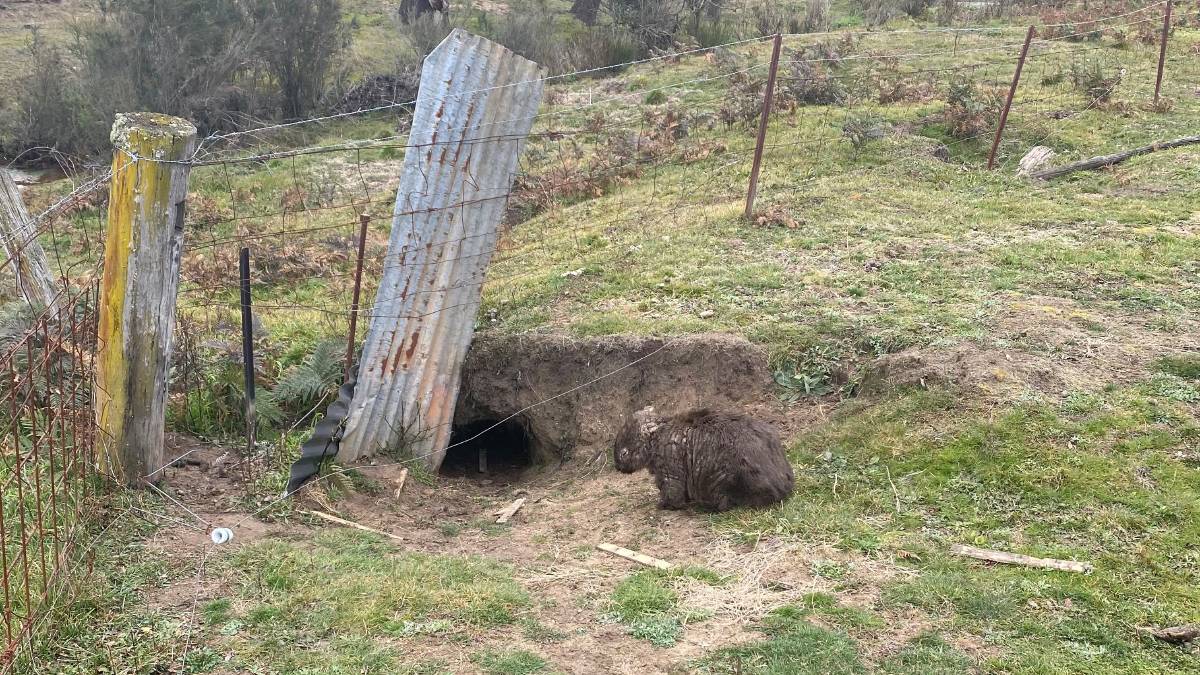 Mange riddled wombats come out during the day so they're easier to spot than healthy ones. Photo: Supplied

An hour or so into our expedition on the Allens' property we spot a wombat. It's the first I've ever seen in the wild. But when a wombat is out in the daytime like this it's usually because it's sick.

There's two theories as to why they do this. One is that they need more energy to fight the parasites, so they forage for longer. The other is that because their vision become muddy with mange scabbing and they need to come out when it's brighter.

The wombat looks like a scruffy rock. Melina quickly sets up a pole and scoop administering device -- a tent pole with a spray can lid duct taped to one end. She sneaks up behind the wombat but it darts down a nearby burrow.

Melina wasn't able to treat it directly but she believes it's been getting dosed by the burrow flaps since it.

The treatment chemical Moxidectin, used on-label to treat cattle for mange -- is dyed blue so it can be identified and doses can be tracked. 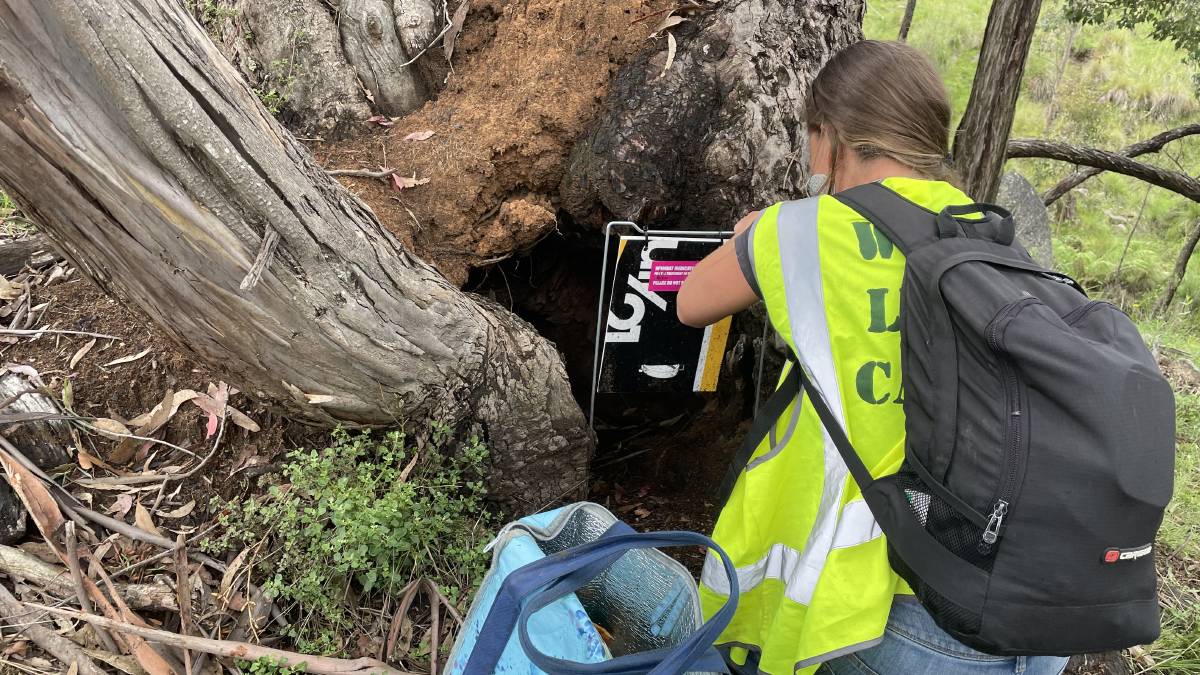 Melina calls it "blue gold". It's about $420 for 5 litres of the stuff. That five litres would cover the Allens' property for 8 weeks. The treatment needs to be carried out for at least 15 weeks.

"It gets expensive," Melina tells me. She relies on crowd funding and donations to the Blue Mountains Wildlife Group, as well as her own pocket.

She's licenced to administer the medication through the Wombat Protection Society of Australia (WSPA) a national charity. In NSW you need to have a licence and be a certified wildlife carer to "interfere" with wombats. Melian's 28 active volunteers work under her licence. She trains them and all risks fall to her. 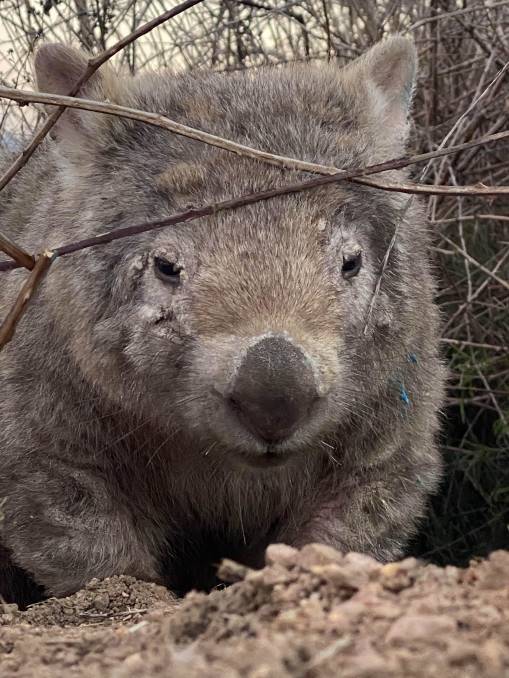 Wombats with mange usually die from secondary infections, starvation, or from wandering onto the road. Photo: Supplied.

"It is much easier to go and get a permit if you don't want wombats on your land -- to shoot them -- than it is to be able to treat them and that's appalling."

Amanda says wombats don't get funding because they're not a popular animal, not like koalas.

"We're battling with a little bit of historical negativity towards wombats," she says. "Lots of farmers saw [mange] as very positive that they went 'shoot a healthy wombat but leave one with mange because it's going to kill off other wombats'." 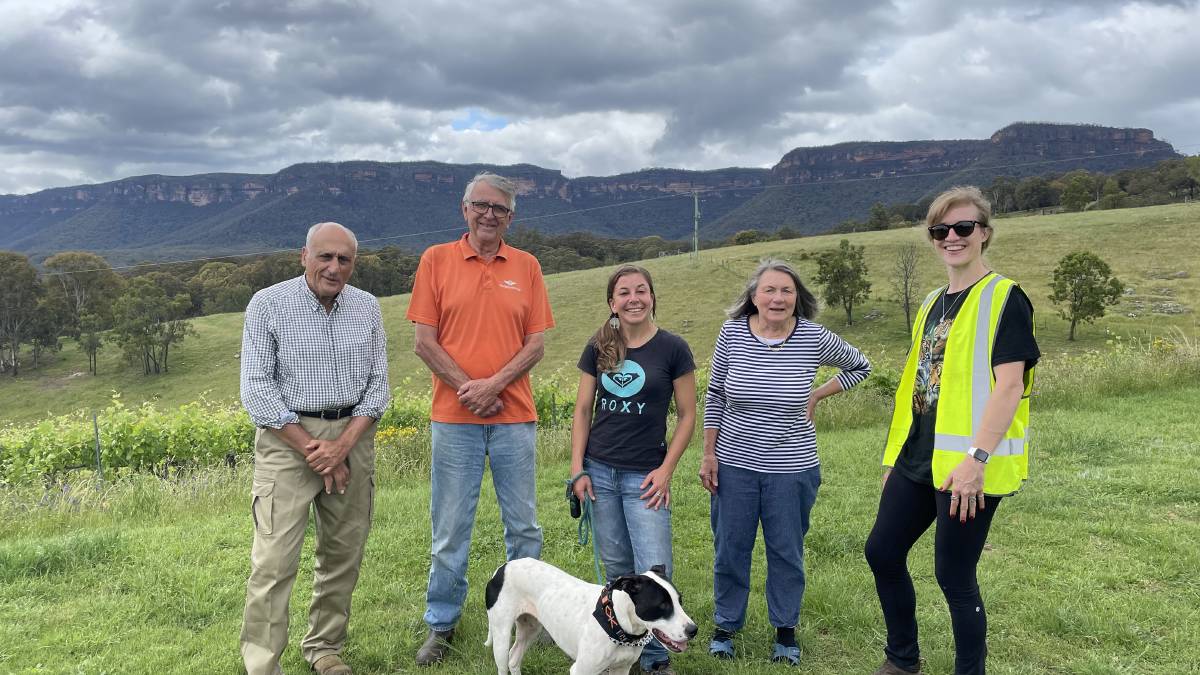 Melina says it's the accumulation of different stresses that makes mange a risk to the whole species.

"You've got to start looking at what's going on with major habitat fragmentation, habitat destruction, when farmers are given freely given licenses to shoot wombats. And then you got things like major droughts, fires and then mange on top of that."

"And now as your populations get smaller, and as mange spreads through these small communities there's gonna be less and less wombats to re-colonise." 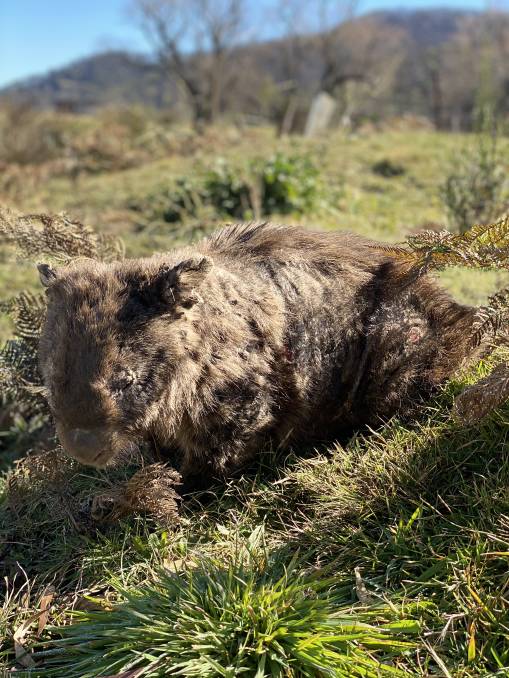 Mange has a 100 percent kill rate for wombats if left untreated. Photo: Supplied.

"I think we just need to tell everyone that they have to lobby government bodies to eradicate mange, it has to be eradicated."

Listen to the full story on the podcast, search Voice of Real Australia on Apple Podcasts, Spotify or your preferred platform. You can also listen above on our web player.