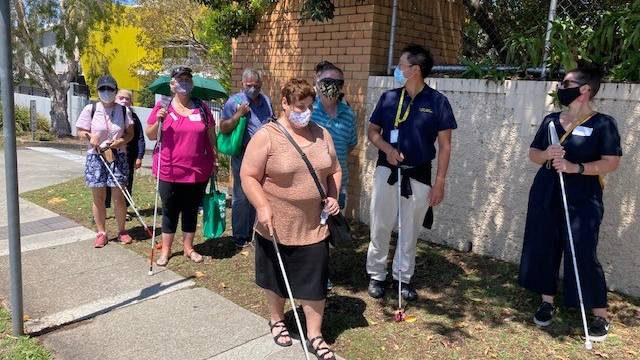 THEY GET AROUND: Bashir Ebrahim (second from right) and his band of explorers during White Cane Day, which included previewing assistive-technology devices.

Advances in technology opening up world more and more for people with vision problems.

HAVE you ever seen a blind or vision-impaired person using a white cane and really thought about how it helps them through life?

While a cane might seem a simple enough thing to sighted people, it is a remarkable piece of equipment - almost a magician's wand - for those who use and rely on one.

As part of International White Cane on October 15, Vision Australia in Queensland held one of its regular Travels Days, where groups of clients get out and about exploring and navigating new places. 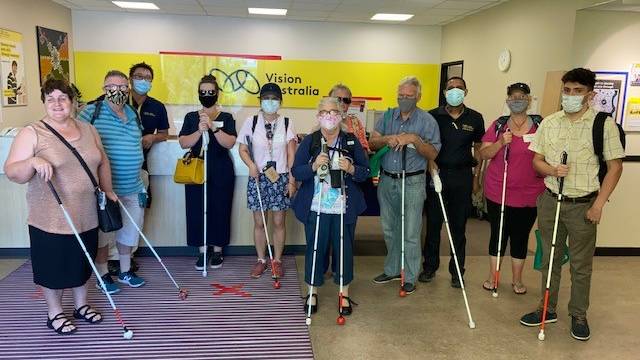 MAKING THEIR OWN WAY: Members of Bashir's group range in age and visual impairment but he says they are united by a sense of adventure.

Things have come a long way from our grandparents' day and the devices previewed all use the latest in sonar and smartphone technology.

Best known for their use in submarines, sonar systems use sound waves to detect other objects. The reflected signal comes back to the sender, with the frequency increasing closer they are to an object.

It is extremely useful in places like shopping centres, where blind or low-vision people often have navigate their way around things like kiosks in the middle of aisles and people milling about.

"The electronics add another dimension to it," Bashir said. "They 'look' beyond the cane tip, giving advance warning of what else is out there beyond the length of your cane that you could collide with."

Among the devices clients tested was the WeWalk Smartcane, an electronic cane with its own app and a host of clever features.

Controlled from the cane or nap, it helps people make their way by detecting obstacles, vibrating to inform of low-hanging obstacles, and more.

But it also connects to a smartphone via Bluetooth, allowing it to check public transport using voice assistant, and discover and navigate to new locations. It can even save places for next time.

Voice feedback comes from the cane's speaker or via a headset.

Another item previewed was the Sunu Band from the US, which looks like a modern smartwatch but which uses subtle vibrations to help people identify when an object is close, be it a person, a wall, a branch, a glass door, or a wheelie bin in their way.

Also trialled was a small, discreet device called the Buzz Clip, which attaches to a user's clothing and notifies them of obstacles through intuitive vibrations.

Or then there was the Miniguide. Australian-designed and made in Adelaide, it is a hand-held matchbox-sized device that users hold it their hand like a torch.

"Like a torch, you move the beam side to side, up and down, in order to 'illuminate' the area you would like to find more about," Bashir said. 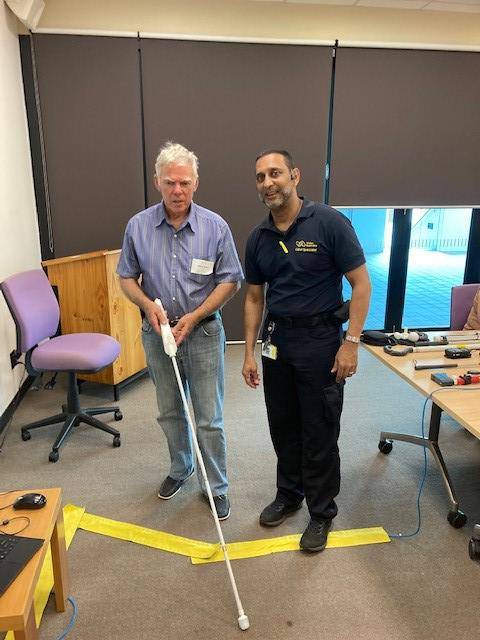 CONSTANT INNOVATION: Bashir and a client try out the WeWalk Smartcane on White Cane Day.

"If there's something within the beam of that sonar up to a distance of four metres, then you get a vibration from the device."

The Omni-Sense Slip On Tip was also tested by the group.

Cane tips are a crucial tool for the blind of vision-impaired, helping users negotiate different types of terrain, such as sand, dirt, snow or uneven surfaces, determine objects around them and even help them decide their walking speed,

But the Omni-Sense tip, developed in Newcastle, NSW, goes further, allowing the cane tip to move in all directions but with significant additional benefits such as improved sensory and auditory feedback. It even makes a whirring sound on grass!

Devices like these can open up the world in new and exciting ways for people living with blindness and low vision.

"The challenge of being blind or having low vision is knowing what you're going to step on to or in to," Bashir said.

"That's where the cane, despite being a simple device, helps you become more confident in moving around. They help you steady-up for what you're going to do next.

"They help you become more comfortable and confident in moving within a space."

Of course, any new device requires training on top of what blind and low-people already employ to get around.

Using a white cane itself takes practice, with various techniques employed from the continuous contact to touch and slide.

Bashir stresses that no matter how appealing an assistive device may be, it "has to be useful and within a person's ability to utilise it and make the most out of it".

"You can buy stuff online or be given equipment, and while it sounds good, it may be an exercise where you've overpaid for something that isn't going to be useful."

He said that when an orientation and mobility specialist meets a new client, the first stage is always an assessment to work out what is going to be of most use to them.

"You have a look at the range of items available. I recently met one gentleman I spent two-and-a-half hours with.

"We trialled everything and talked about his goals; what he could apply the equipment to.

"After we got through that, he started to think, 'Well, maybe I could go to different places. It was about his next stage: developing his repertoire and getting out a bit more often."