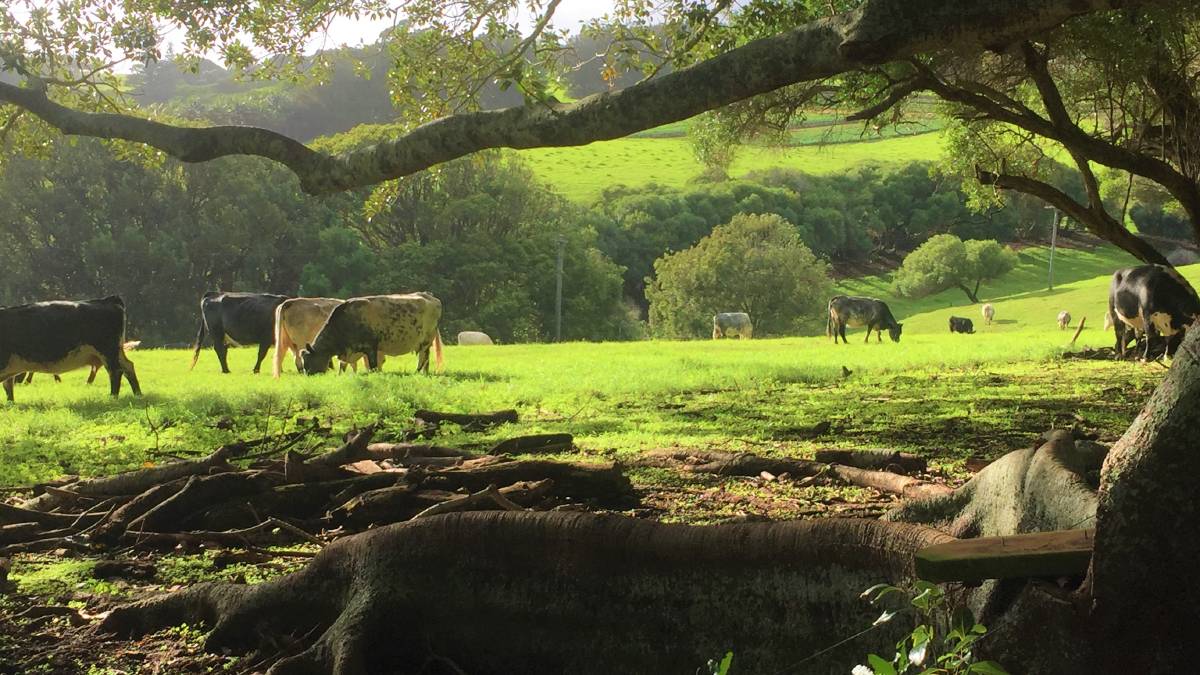 In this game of chance we call pandemic travel planning, I was lucky enough to find myself earlier this year standing in the check in line at an eerily deserted Sydney airport.

I was at the international terminal with my passport in hand, but I wasn't technically leaving Australia.

Norfolk Island, I was to discover, had enough far-away feels to give a sense of escape from the COVID rollercoaster, however briefly.

Norfolk Island appears as a tiny green speck in the sea as the plane begins its descent on the two and a half hour flight from Sydney.

You could walk the length of the island in half a day, along country roads where cows roam freely and the driver of each passing car offers the "Norfolk Wave", a subtle lifting of one finger from the steering wheel.

The ever present Norfolk Island Pines cover the countryside and their seeds blanket the ground. Captain Cook saw these trees when he sailed past in 1774 and thought they would make good ship's masts. He was wrong about that, but then a lot of things were to go wrong on Norfolk Island in the years that followed. 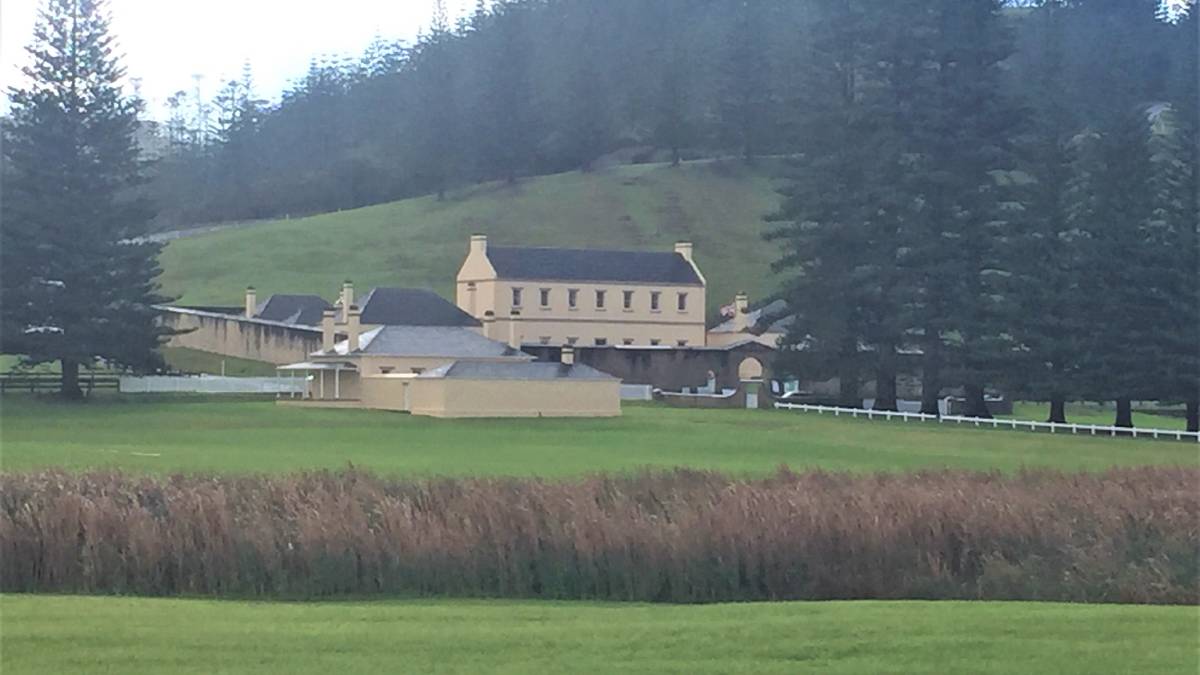 The local tourism industry is built around the island's dramatic and brutal history. There are the early seafaring Polynesian inhabitants, two barbaric periods of penal settlement and the arrival in 1856 of the Bounty mutineer men and their Tahitian wives from Pitcairn Island. History is retold in ghost tours, dress-up dinners, museum visits, festivals and theatrical events.

When the first lockdowns of 2020 hit, Norfolk Island went into strict isolation, shutting down to all visitors for several months. Since then, visitation has been stop and start and limited by the changing situation in various states.

For an economy that relies so much on tourism, these quiet times were tough. Now, with the slow but sure easing of travel restrictions, Aussies still limited to domestic travel will no doubt be looking to this unique destination right on our doorstep. Many of the tour hosts you meet have surnames like Christian, Adams, Quintel and McCoy, and are the descendants of the roguish historic figures most of us know from the film Mutiny on the Bounty.

In what seems like a well oiled tourism machine, the hosts tend to pop up in different guises; Rebecca Hayes, who showed us through the late Colleen McCullough's house later appears as a character in the island's long running historical play, Trial of the 15. This production has been dubbed the Pacific's answer to The Mouse Trap, having played weekly for ten years.

The progressive dinner, a roving three courses served in the homes of locals is a long running tradition. On our tour, dessert was served at the home of Alison Christian, who regaled the crowd with stories of the rivalry between the mutineer families. It was a performance that would have been at home on the stages of the Sydney or Melbourne comedy festivals.

The locals are clearly fiercely proud of their heritage and still speak the native "Norfolk" amongst themselves. They seem to share a stoicism, a sense of humour and a pride in their inherited outlaw status. There is a feeling that the island is a hideaway - a refuge for the disenchanted. In convict times transportation to Norfolk was considered to be a punishment fit for only "the worst of the worst"; repeat offenders, escapees and Irish political rebels. 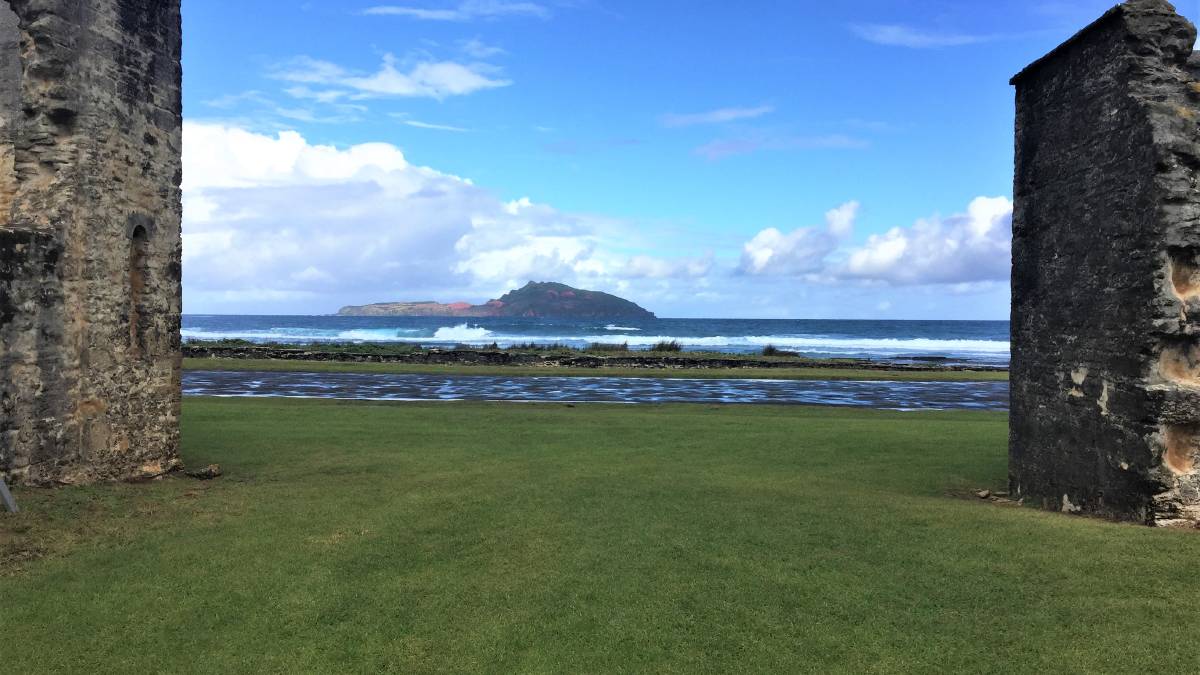 Beauty and violence co-incide on Norfolk Island. Looking out over Slaughter Bay from the convict prison walls. Photo, Kathy Sharpe.

Tania Anderson has worked for many years for Norfolk Island Tourism. She is seventh generation Norfolk Islander, and a direct descendent of Bounty mutineer John Adams.

Tania said while the initial COVID lockdown and the closure of the island provided everyone with a bit of a break, the industry was now firmly focused on inviting visitors back.

"Yes the island's main industry is tourism, but locals are very resilient. People were renovating, gardening, helping others, you just have to get on with it," she said.

"We don't have an international market as such, flights here are from Australia and New Zealand." 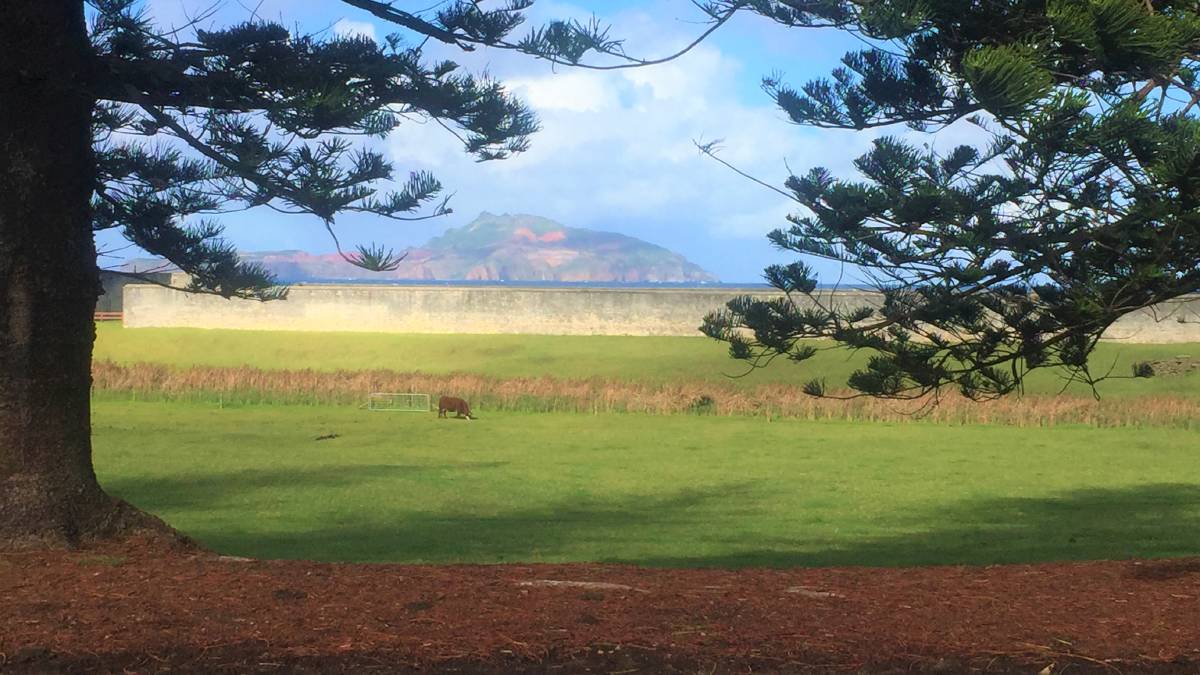 She said the island's reputation as a destination mainly for honeymooners and retirees was changing.

"Depending on the time of year, the island attracts a different demographic. During summer we have lots of families visiting, then there are the sports tournaments that attract that type of traveller."

There is much to see; the historic buildings of Kingston town, the convict sites, the museum devoted to the first fleet ship, the Sirius, wrecked on Norfolk Island in 1790. There is also golfing, fishing, boating, cycling and snorkeling in the calm waters of Emily Bay and on the reef at nearby Slaughter Bay.

The island is awash with stories. During the hunger that followed the wreck of the Sirius the islanders devoured a native bird to extinction as they waited for supplies. A stone bridge built by convicts is said to have oozed blood of the guard who was murdered and bricked into its walls. The convicts were duly rounded up and executed, and the bridge is named "Bloody Bridge". Gravestones of executed convicts are marked with the tell tale skull and crossbones of the damned. Ghost stories and tales of spooky sightings abound. 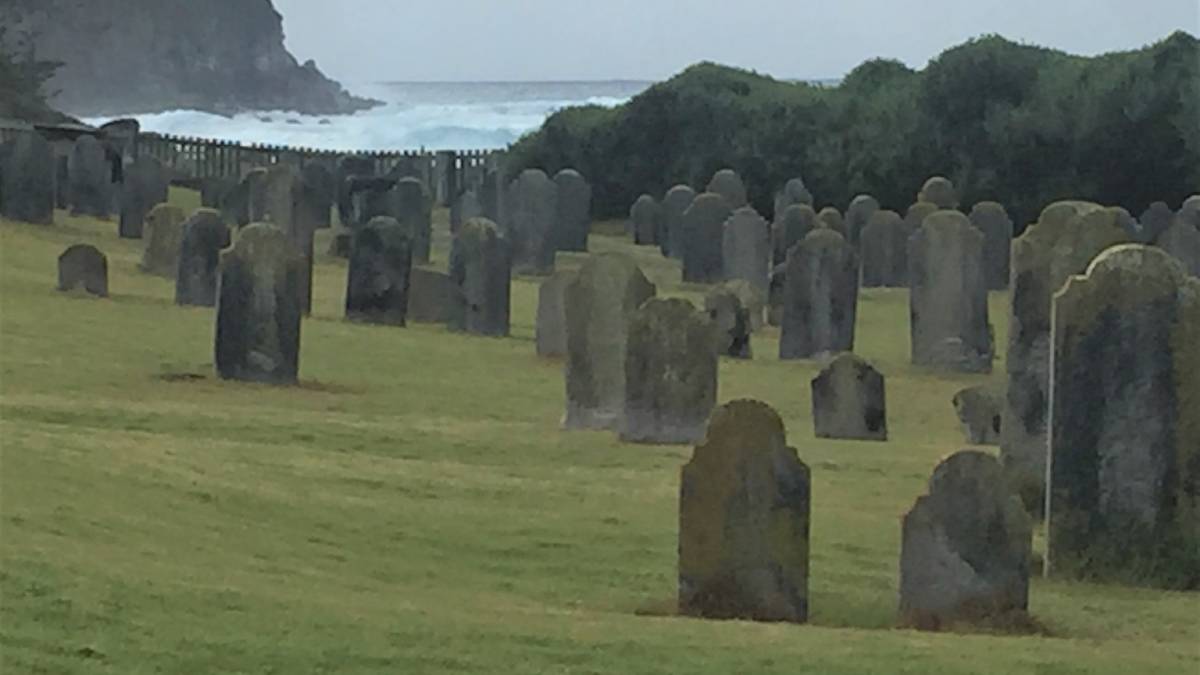 The older part of the graveyard at Norfolk Island tells many stories, including tales of repeated convict rebellions. Photo by Kathy Sharpe.

Starvation was never far away in the early days of settlement, but this is not the case today. Though the delivery of stores can still be a problem, the seafood served in the local restaurants is wonderful, and our group's visit culminated in the traditional island "fish fry", a mass feeding frenzy complete with a local band and a polynesian dance troupe for entertainment.

After a week on the island, you could almost forget there was a pandemic in progress across the water. Almost, that is. On the second last day of our tour we were drinking coffee on a rugged headland when our guide took a phone call. Grim faced, he directed the Victorian members of our group to return to the hotel where the federal police were waiting to question them. Victoria had gone into its fourth lockdown. 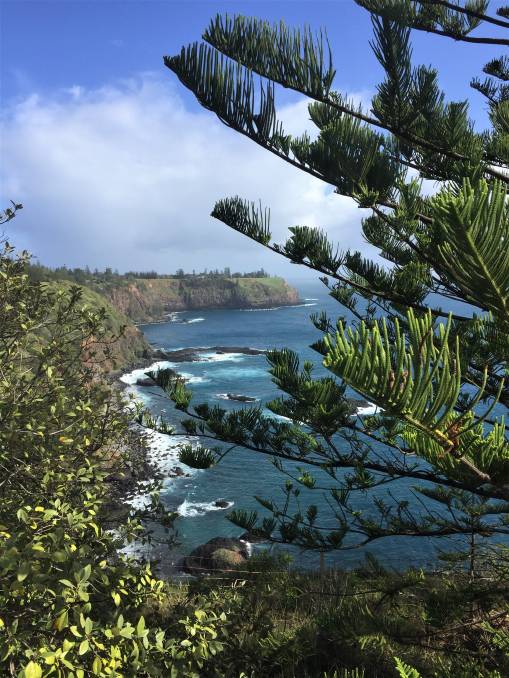 Norfolk Island is small in size, but boasts beautiful scenery at every turn. Photo, Kathy Sharpe.

Bookings are now picking up, much to the relief of Sarah Hansen, who with her husband took over the island's PineTree Tours just as the pandemic struck.

"We had purchased the company and taken ownership 16 days before the Island went into complete lockdown," Sarah said.

"It was a really hard time with no income, but we still had to have people there to process all the cancellations and rebooking.

"We are so lucky to have wonderful staff on the Island and they have done an incredible job helping us hold it together. Thankfully, the Island slowly started opening to different states, so that brought some tourism back.

"We can't wait for it to open up again. Our main aim is to keep the Island safe but giving those who can travel safely a great time exploring our amazing Island."

Qantas flies to Norfolk Island from Brisbane and Sydney (travel restrictions permitting). Would-be visitors should follow www.norfolkisland.com.au for travel updates and bookings. I booked a small group tour with Encounter Travel, and travelled in May 2021. 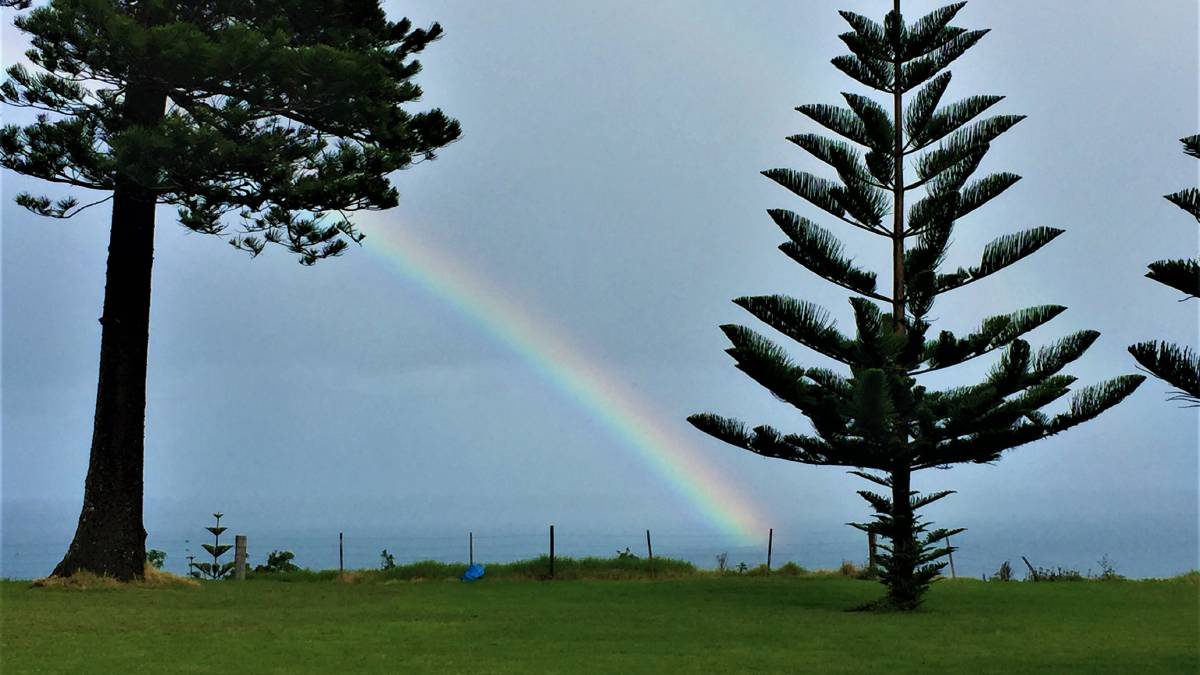