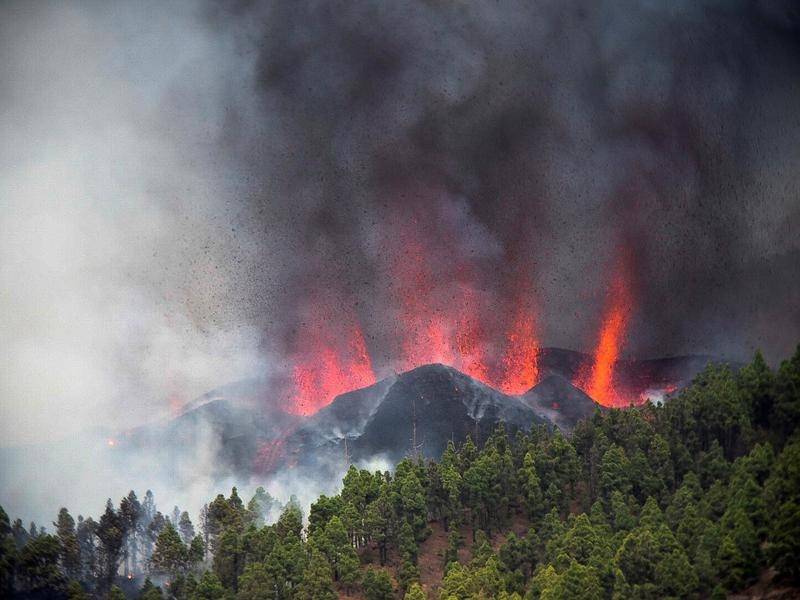 At least 5000 people had to evacuate after a volcano erupted on the Spanish island of La Palma.

Authorities have evacuated about 5000 people from villages in the Spanish Canary Island of La Palma as lava spews from an erupting volcano, local officials sa...

Authorities have evacuated about 5000 people from villages in the Spanish Canary Island of La Palma as lava spews from an erupting volcano, local officials say.

It is now spreading through the neighbouring village of Los Llanos de Aridane where hundreds of houses are at risk, he said.

"We are monitoring the trajectory of the lava," Rodriguez said.

Since erupting on Sunday afternoon, the volcano has shot lava up hundreds metres into the air and poured flows of molten rock towards the Atlantic Ocean over a sparsely populated area of La Palma, the most northwestern island in the Canaries archipelago.

"The lava is moving towards the coast and the damage will be material. According to experts there are about 17-20 million cubic metres of lava," he said.

No fatalities were reported and none are likely to happen so long as no one behaves recklessly, vulcanologist Nemesio Perez said on Monday.

La Palma had been on high alert after more than 22,000 tremors were reported in the space of a week in Cumbre Vieja, which belongs to a chain of volcanoes that last had a major eruption in 1971 and is one of the most active volcanic regions in the Canaries.

Prime Minister Pedro Sanchez arrived in La Palma on Sunday night for talks with the islands' government on managing the eruption.

"We have all the resources and all the troops, citizens can rest easy," he said.