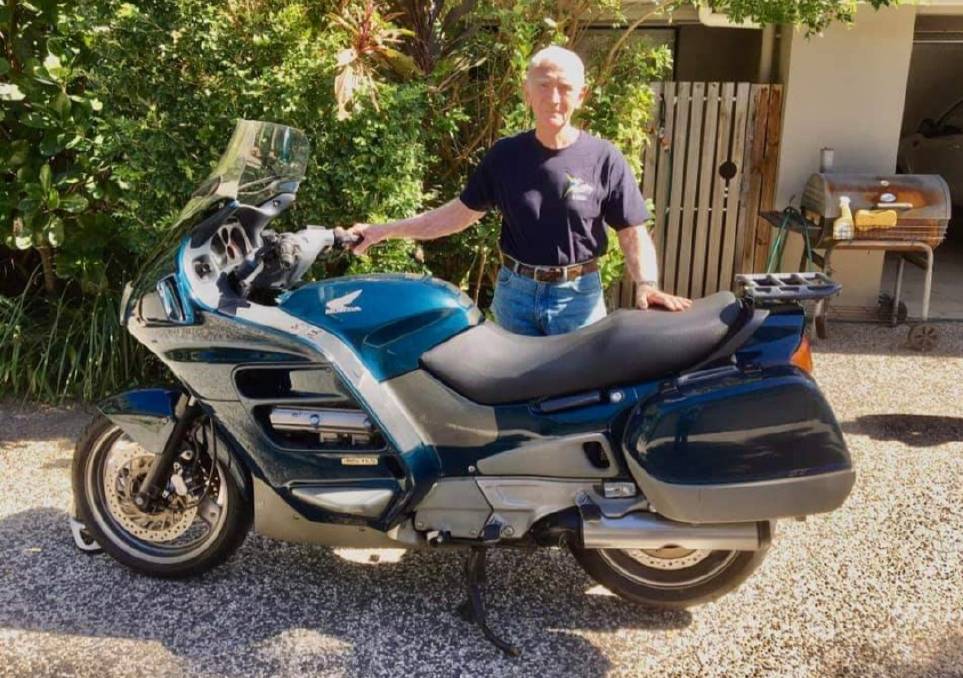 THE BEST ONE YET: Roland with his Honda. He says today's motorbikes are far more comfortable and handle much better than the leaky old machines he used to ride.

From police patrols in Africa to delivering the mail, it's been a grand ride for Roland.

At 81, Roland de Chazal has called it quits as Australia's oldest motorbike postie but his 65-year passion for two-wheeled machines remains as strong as ever.

The Rhodesian-born dynamo who lives and did the rounds on Magnetic Island has plenty more road trips in mind - once the final fruits of his labours come in.

Roland bought his first motorbike - a British-made AJS 650 twin - as a 16-year-old police cadet in the now Zimbabwe. He has never been without one once since. But he says his latest is the best yet.

"I had a lot of British bikes. I had a Norton, a Triumph, the AJS and then I went on to Hondas because they didn't leak oil.

"It's the best bike I've ever had, a V4 twin-cam, three-carb job, which I hope to get away on when my first pension cheque comes in."

Roland was 78 when he became a postie, working eight hours a day, five days a week, delivering letters and parcels to Nellie Bay and Picnic Bay.

He said the best part of the job was getting to know so many people.

He particularly liked chatting with the older ladies, some of whom were widows.

"They'd wait for the old postman and say have a cup of tea and a piece of cake. Some were quite lonely.. And my boss knew about it and thought it was good.

The chief hazard of the job was a traditional one for posties: dogs.

"I was bitten twice, the second time pretty badly. The dog had bitten through my left arm.

"I had to hold my arm and ride the bike - thank God it was automatic. I made it to the clinic, where I almost passed out from loss of blood.

"But they sorted me out and after I came round they gave me a tin of Guinness, said drink that, it's good for iron. I said, well if that's going to happen, I may as well get bitten tomorrow."

Roland has lived a full and fascinating life that also included a lot of riding on horses.

"I did highway patrol but was mostly on horseback in patrol in rural areas, which I would say was the highlight of my police career.

"I was stuck down in the south of Rhodesia, which was very, very wild at the time - there was no development then.

"I'd go out with a black constable and a black handyman, who would go ahead of me with a donkey and a supply of equipment and food and set up the base camp.

"Then I would come down and from that camp do a horseback patrol in a radius of 25 kilometres. Then we'd move that camp another 50 kilometres and do the same thing again.

"I was out for six weeks at a time. I was out with a lot of black chiefs and headmen. And we'd hold a court once a month - nothing serious; anything like rape or murder would go to the police station.

"But for theft or other crimes we'd hold court with the chief. And that was very interesting because after taking all the notes, the chief, who was like a magistrate, would then decide what punishment that person would get.

"And he might say time done and nine lashes and I would say 'That's bit harsh, can we bring it down, say, to four; he won't do it again'.

"That would happen and the man would then walk backwards from the chief out of the kraal. And you'd never see him in trouble again." 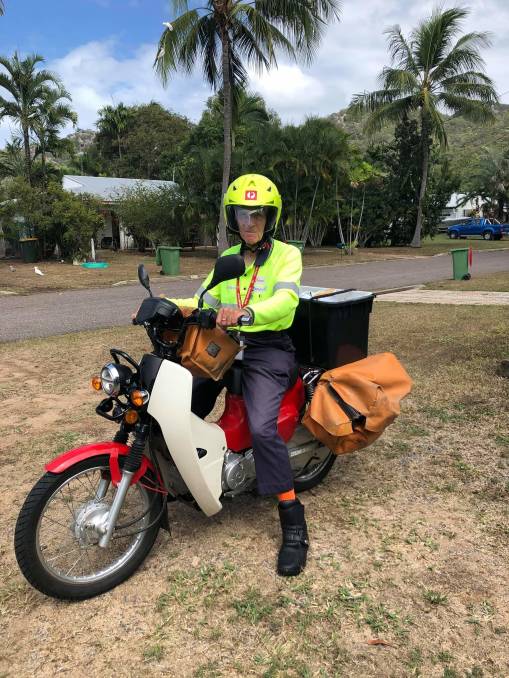 HE STARTED AT 78: Roland doing his rounds on Magnetic Island before his recent retirement.

Roland grew up in Que Que, in the dead centre of the country halfway between Salisbury (now Harare) and Bulawayo.

He said the name comes from the sounds of the frogs. Despite losing his father a young age - he was raised by a friend of his dad - he said it was a "fantastic place to grow up, a small town of five or six thousand people"..

"I was born on a farm with lots of animals, lots of fresh air and very healthy. I used to go to school on horseback. At one time I had a pet cheetah. It's the only wild cat you can train like a dog. I called it Jakals, which means jackal."

After leaving the police, Roland moved to South Africa and became a salesman for Anglo Brands Limited, which was the biggest grocery manufacturer in the southern hemisphere.

"I did 34 years with them up to 2000, finishing up as area sales manager. I was based in a place called Pietersburg, which is close to Botswana."

Roland has three children, two by his first wife, who was tragically killed in South Africa.

"Later on I met this young lady who I didn't think I had a chance with. 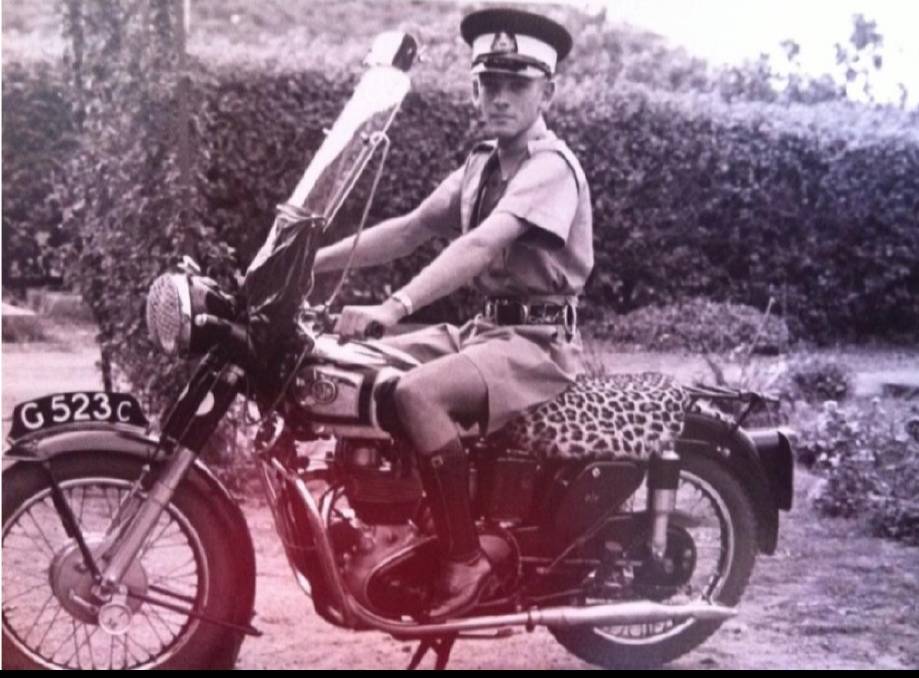 YOUNG MAN IN A HURRY: Roland as a dashing policeman in Rhodesia, now Zimbabwe.

"Anyway we up finished up marrying and having my lovely daughter Danielle, who is married and having her first baby in November; my first Australian grandchild."

Arriving in Australia in 1994 - his wife Francina is an accountant, which gained them the visa - he was instantly attracted to Magnetic Island.

"It's fantastic living on here. I wouldn't live anywhere else," he said.

"Before becoming a postie I was working for Townsville City Council as a gatekeeper at the refuse dumps. I was there for seven years and then they had a reshuffle and I was out of work.

"But then this job came up and because I had a motorcycle licence I got lucky. I was 78. I loved the job but in the end it was getting a bit stressful.

"The parcels were really piling up - were getting up to 100 a day - and we were working long, long hours, sometimes till seven at night.

"Eight hours on a motorbike is fine of you're travelling up the coast but when its stop-start and you're scanning parcels and taking photos, it started to become a bit much.

"My kids, who followed me over from South Africa, said Dad, you're looking a bit stressed out, we need you to be around for a bit longer. So that's when I retired."

But only from work. A fit and active man all his life, Roland continues to lift weights - something he has done since the age of 18. In those days he lifted heavy weights; he represented Rhodesia in 1968.

He lifted heavy weights right up to 2010. "But nowadays I train with light ones just to keep fit:"