The mammals are normally seen in pods of 20 to 30 but were seen in the hundreds in NSW last week.

More than 100 humpback whales have been captured in a feeding frenzy by spectacular drone footage.

Crew members from Sapphire Coastal Adventures were on a routine training day when they witnessed the event off the coast of Bermagui on the south coast of NSW last Thursday.

Humpback whales are normally seen feeding in groups of 20 to 30 at this time of year, but it's uncommon to see them in such large numbers. 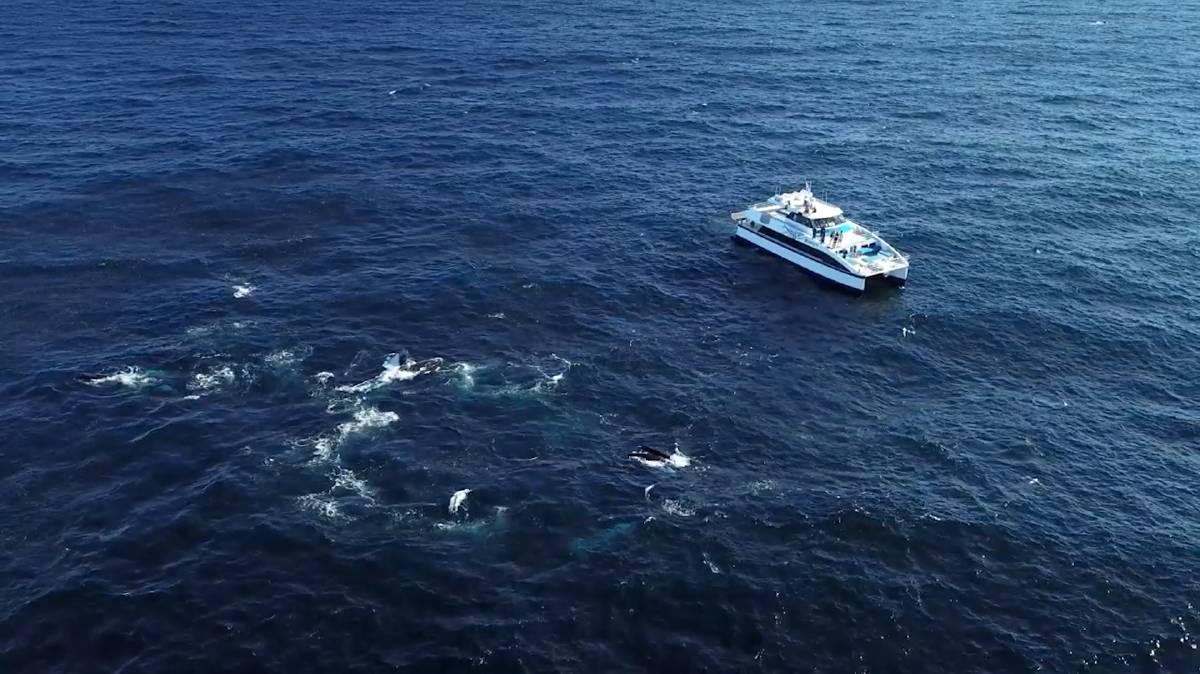 Crew members from Sapphire Coastal Adventures were on a routine training day when they witnessed the feeding frenzy off the coast of Bermagui on the south coast of NSW last Thursday. Source: David Rogers Photography

Photographer David Rogers, who is also a crew member, said filming the spectacular event was "a complete rush".

"We sort of parked the boat in regulation distance and then the bait ball came to us - we were looking over the side and could have touched them," Mr Rogers told Australian Community Media (ACM).

"It's not just a visual experience, it was a full sensory experience. The noise of the whales working together and blowing was very noisy - surprisingly noisy.

"It was also surprisingly smelly. Whale breath is really smelly and when you have 100s of them you get this intense fishy bad breath in the air." 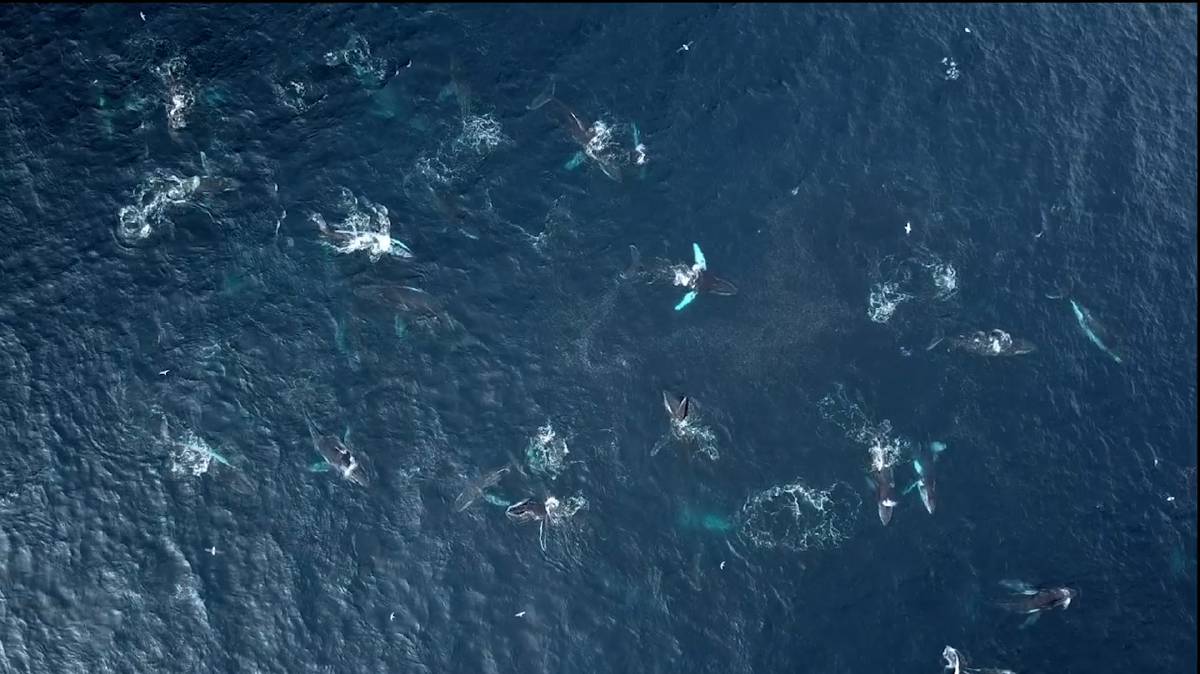 Photographer David Rogers said filming the spectacular event with his drone from above was "a complete rush". Source: David Rogers Photography

Mr Rogers and the crew did not realise the sheer scale of the feeding frenzy until the photographer pulled out his drone and began filming from above.

"I normally take my drone out on the boat but never use it because it's quite difficult to launch and land the drone on a boat," he said.

"But this time I had to because the only way to show the scale was to launch the drone. As it went higher, it just became more amazing with this new perspective."

"The whales were zooming through and lunge feeding through it (the bait ball)," he said.

"The smell is amazing, it's like a fermented fish smell, that's the first thing you notice, it's really strong, then you start hearing the noise as they're herding the bait in together. 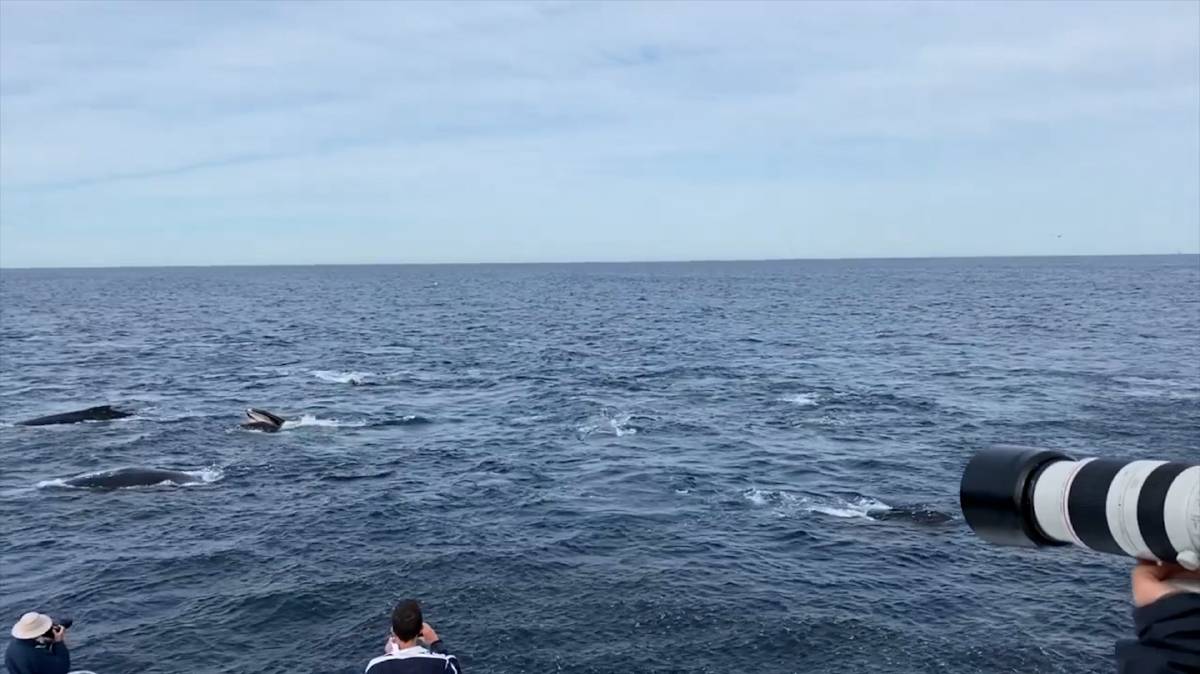 Mr Miller has been whale watching for 19 years and has only ever seen a mass congregation of this side twice in his life.

"The first time it ever happened was last year and we documented that. It's happened two years in a row now but it's too early to tell if it's a trend,' he said.

"On a good day you might see 20 to 30 whales in peak season, so that really puts this into perspective."

Humpback whales are generally 12 to 16 metres long and weigh from 25 to 30 tonnes - although larger specimens can grow up to 18 metres and 40 tonnes.

The species generally travel in pods of two to three (female, calf, and escort) but can be seen in larger groups for the purposes of feeding or breeding.