As the South Tower of the World Trade Center collapsed, those that loved Steve Evans feared the worst. This is his story of that fateful day in New York City.

September 11, 2001 in Manhattan was clear and bright, with all the hum of the city heading to work. People picked up coffees from street stalls, striding from the subway stations and ferry jetties to the towers.

It was one of those brilliant mornings when it was good to be alive in New York. The heat of summer had gone and the balm of autumn was there in what felt like the greatest, most positive city on the planet.

I was due for a meeting in the South Tower at 9.30 and had decided to have breakfast first at the top of the North Tower, in Windows on the World.

I was saved by a Cuban coffee shop. I got off the bus on the corner of 14th Street and 7th Avenue and spotted Sucelt.

Because American diner coffee is so bad - like the drips from a wrung-out dish-cloth - a Hispanic coffee shop was not to be passed. Coffee and pastries - empanadas - delayed me just enough to save my life.

It meant I didn't have time to go to the top of the North Tower. Instead, I killed time on the ground floor of the South Tower. 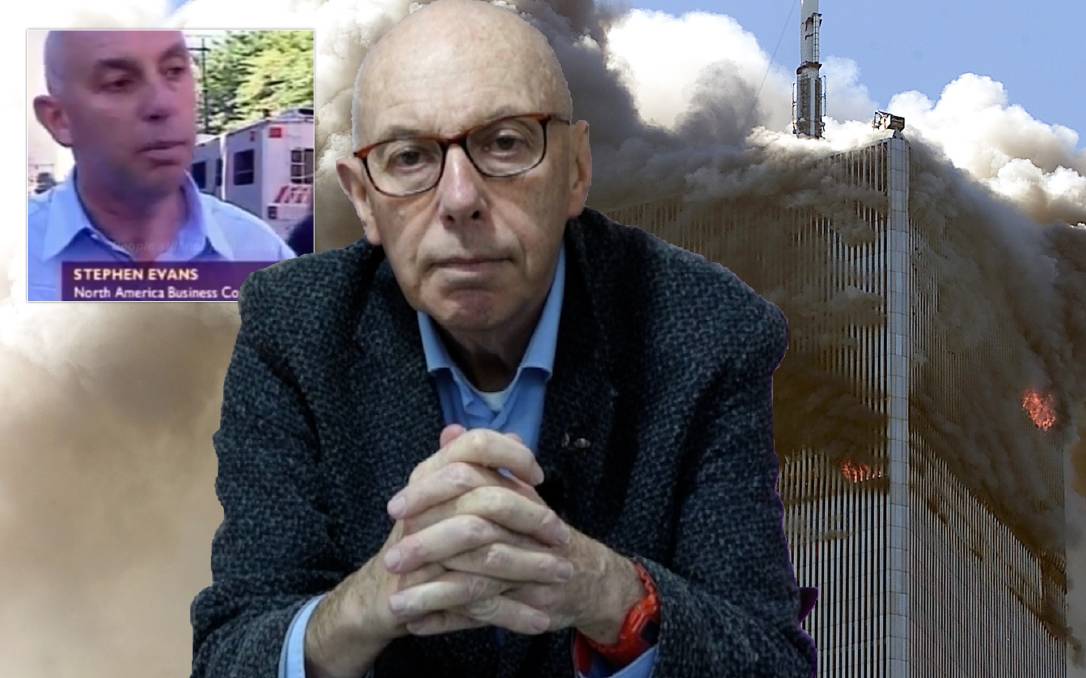 At 8.46, there was an almighty, metallic crash, as though a huge building skip had been dropped from a great height.

Dust filled the lobby and I exited, more confused than frightened. Above, I could see the gash where the first plane had gone in, flames coming out.

A journalist's instinct to file took over and I persuaded a newsagent at the base of the tower to let me use his phone - mobiles didn't work.

At 9 o'clock, I was on the air on BBC radio. It's a cheap feeling but I remain proud of broadcasting live from the scene before the second impact.

The second plane then went in and the newsagent pulled down the shutters. I offered him my credit card to let me stay, using his phone, but he refused.

After a search through empty shops for a phone which would work, I hired a room in the Embassy Suites hotel on Vesey Street. I remember looking out and seeing the line of fire trucks and thinking, "Now everything's going to be alright". 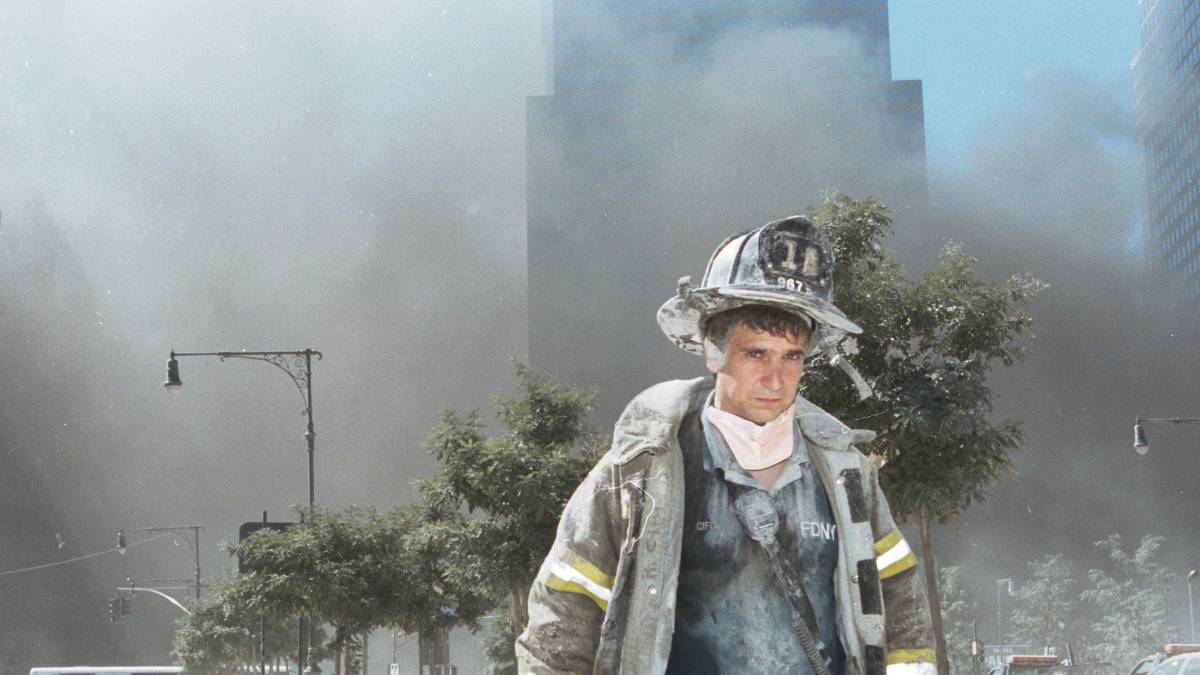 An unidentified New York City firefighter walks away from Ground Zero after the collapse of the Twin Towers. Picture: Getty Images

Then the neighbouring South Tower collapsed and the hotel lights went out. The alarms blared and I got out down a dark back stairway, angry that I couldn't broadcast.

By this time, bewilderment had been replaced by fear.

I never saw a jumper. A photographer friend who did will never recover from it. He had been a hard news photographer - the man to turn up at the scene of some mob slaying. After September 11, 2001, he never took a picture of anything more threatening than food on a plate. For him the demons were real and under his bed every night. I did not feel that kind of terror.

The only moment when fear bordered on terror was when the North Tower collapsed. For a moment, the debris exploded towards me and I thought: "It's coming faster than I can run."

The moment was captured because I was recording what's known in the trade as a piece-to-camera.

In the event, the North Tower debris stopped short but it was enough to make me leave the scene.

Taxis were streaming away - or rather edging forwards away - their meters off, taking people up-town in loads.

I got into the back of one where there was already a Chinese-American woman, a stranger.

We sat side-by-side, shoulders touching, leaning in, listening to the news in Spanish from a local Hispanic station, trying to grasp the ungraspable.

We were trying to make sense of a huge global event as a huge personal event was also happening to her.

The lady turned to me and said she was going into labour and needed to get to a hospital. She gave me a piece of paper with a phone number to ring her husband and tell him that she was OK and about to give birth. I'm ashamed to say that I lost the paper in the turmoil.

I later talked to a widow in inconsolable grief.

She had kissed her husband good-bye that morning and he had then been trapped above the fire. The two of them spent what might have been an hour or so on the phone.

On TV at home in suburban Connecticut, she could see the North Tower on fire, and kept directing him - "Go to the roof. Maybe you can get to a helicopter".

He would leave and return and say there was no way out. No way out.

She then saw the tower collapse and the phone went dead.

As she and I talked, she kept smoothing the wooden dining table which her husband had made. She stroked that table as though she was stroking him.

The signs of loss were everywhere: the line of empty hooks in a fire-house where there should have been the helmets of brave, brave firefighters.

It seems odd to say but New York was uplifting and hopeful in the days immediately after.

I used to drink in a classic, long and narrow New York bar on 11th Street. A few evenings after the attacks, I went in to find the bar dark and crowded - but hushed, subdued, thoughtful.

As I entered, the barman caught my eye and when I reached the bar, he clasped both my hands in his and just held them tight. Strangers did that in the days after the attacks.

The flag - the Stars and Stripes - became everybody's, and not just a symbol for the white right. Middle Eastern shops displayed it. Rickety old cars in poor, black neighbourhoods flew the flag.

I bought a big sweater with the Stars and Stripes filling my chest and puffed it out in defiance and pride.

Twenty years on, I remain angry at the outrage that a gang of men could try and impose their mediaeval views.

But I also feel privileged to have been part of the solidarity of a great mongrel, modern city which defied those zealots.

I also learnt the power of love. Those who loved me thought I was dead when the South Tower collapsed. They saw it fall on television as my out-of-vision voice cut abruptly in the hotel.

When those who loved me came on the line later, I realised how much I meant to them and they meant to me.

It still brings tears to my eyes.