All this after it was saved from demolition.

Contracts have exchanged on the sale of the Australasia Hotel, from Neil Rankin to developer Core Asset Development (CAD).

It's understood the historic hotel in Eden, on the NSWE Far South Coast, was acquired this week for about $5 million.

The hotel was saved from demolition by the award-winning builder and his foreman Peter Goncharuk and team, who are carrying out extensive renovations on the property.

Mr Rankin purchased the Australasia in late 2019 for $150,000 and with his team is working on the interior of the 1904 hotel, having revealed the restored facade of the original building in June this year.

Bega Valley Shire Council purchased the Australasia in 2016 "as a civic space and to upgrade the CBD," according to then-councillor Sharon Tapscott.

Community group Eden's Australasia lobbied to ensure the building was put on the heritage list, and fundraised to preserve the significant historic building, with the group's main goal to ensure the facade was restored.

Costs associated with the restoration, repurposing and maintenance of the building led to its sale from BVSC to Neil Rankin in 2019.

The leading commercial building contractor on the Far South Coast made it very clear he was passionate about the restoration, but had no interest in becoming a publican. Award-winning builder Neil Rankin salvaged and reused many original materials in the first stage of the restoration of the Australasia.

Bega Valley Shire mayor Russell Fitzpatrick said the sale to CAD would still be subject to the side deeds that were part of the original contract with Neil Rankin when he purchased the hotel.

"The facade still has to be completed in its historic form and the walkway still has to remain as public access and be maintained by the owner, unless gifted to council," Cr Fitzpatrick said.

"The conditions of the side deed still apply," he said.

The developers have also lodged a development application for a $100 million, four-tower residential and hotel complex known as The Sapphire of Eden, and propose to use the Australasia as tourist accommodation and "a hub for the local community to gather and enjoy a drink and a meal to complement the tourist ambience of the Sapphire Coast".

Australasia Hotel's operations and management will be linked to the new Sapphire of Eden Hotel By Radisson.

"We can now use the Australasia for tourists visiting the area and want to stay in high quality, heritage accommodation," Mark Toma, a director of CAD, said.

According to CAD, "important tourist infrastructure like the Sapphire Hotel of Eden, Australasia Hotel and the new cruise terminal will set the area on a rapid growth path, with workers and tourists moving into or visiting this incredible historic area".

It is anticipated the hotel will be operational by January 2022.

Collaboration with developer 'fantastic result for everyone' says Neil Rankin 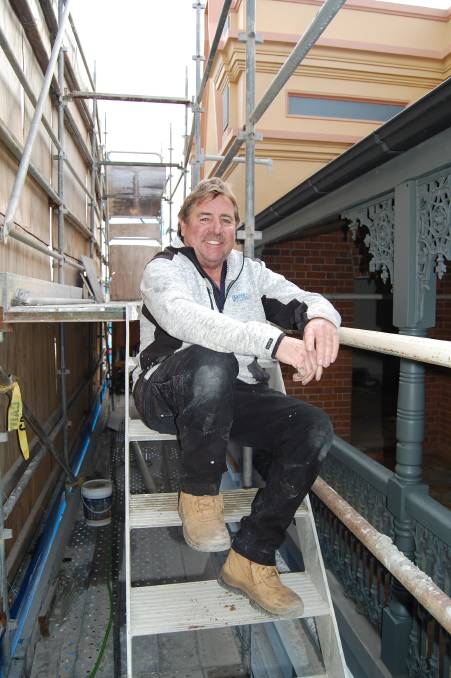 Neil Rankin is proud of the work he and his team have undertaken on the restoration of Eden's Australasia. Photo: Leah Szanto

Having beautifully restored the facade and nearing completion of his efforts on the mammoth project, Neil Rankin said he is feeling great about the sale of the hotel to Core Asset Development (CAD).

"I promised the community I would finish the front facade which I have done, this week a new roof is going on and that will mark the end of my contract," he said.

"I'm quite proud of what I have achieved.

"The last two years have been different, with everything closed down and no-one willing to make investments just in the hope the doors would open again.

"So the project was sitting there a bit stale, and wanting new direction."

Neil felt strongly that CAD would bring competence and professionalism to the next stage of the development.

"It's the perfect marriage, me having put a lot of pride into the front and them taking on the rest.

"I have a good feeling about the finishing of it, it'll be better for Eden.

"I've loved it, I have really enjoyed it, we've accomplished a lot with a great local team," he said.

Neil would like to retire soon but will be continuing to give a hand to the project as a building consultant, in particular watching over the heritage aspect of the work.

"I'm going to hand my team over to continue doing the heritage work and the developer will get a bigger team on board too," he said.

"It's still very important to me and I'll be keeping a close eye. These plans for the project are perfect and couldn't have come at a better time, it's really positive, really professional.

"CAD will be keeping it pretty close to the masterplan. This is their model, having both the motel and hotel, it'll be great for the town," Neil said.

The project so far has involved many people in the local area and Neil was filled with gratitude reflecting on the way so many people had backed him.

"I've got thousands of people to thank, especially the community for supporting me in the project, and a lot of local businesses," he said.

"Everybody loves it. Everybody is so excited.

"Kids come past and I hear them say, 'Look at the castle!', I have had people in tears thanking me for the work we have done.

"This next step is a fantastic result for everybody."