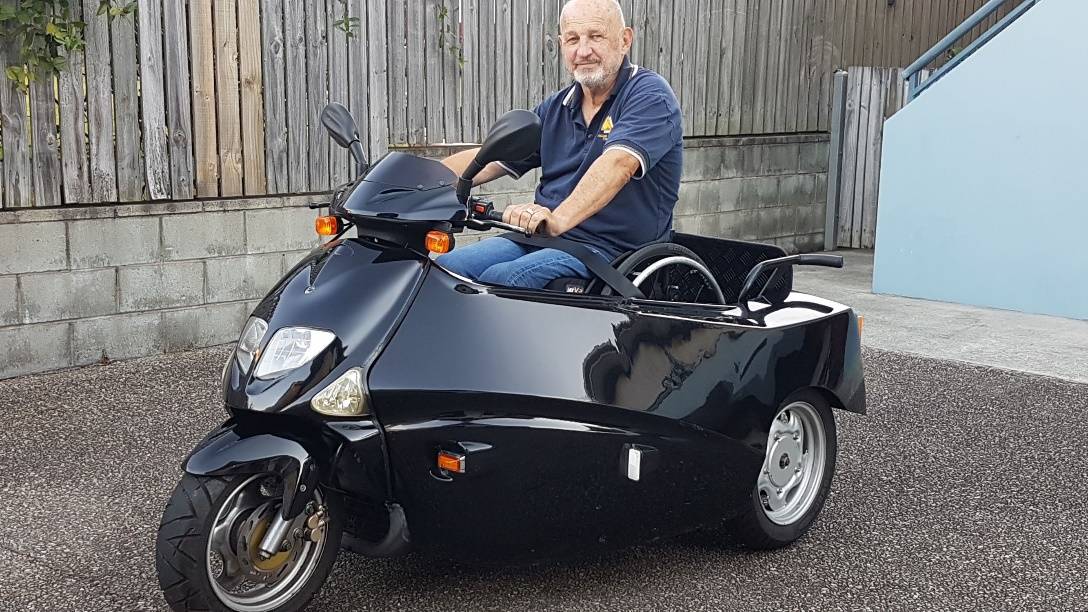 REVVED UP TO GO: Bevan Kearsley with his converted, fuel engine-powered scooter on which he plans to do a loop of the state - and beyond. His journey is being supported by Spinal Life Australia and Carers Queensland.

Indeed, this year the Brisbane grandfather planned to ride around Australia to raise funds for spinal research.

But new travel restrictions scuppered that so now he's heading on a mighty trip around Queensland instead.

All going well, on August 30, Bevan, from Greenslopes, will start a loop of the state taking in Townsville, Mount Isa, Winton and Charleville before returning home to Brisbane.

He said that after retiring he was looking for something to do. He also wanted to raise funds for a good cause.

"I had the wheelchair scooter and always wanted to go around Australia and thought I'd combine the whole thing," Bevan said.

"I ripped the seats out of my Toyota HiAce Commuter and converted it into a wheelchair-assessable campervan so I have somewhere to sleep, and my mate will drive the van behind me as a support vehicle."

Along the way Bevan, who sustained a spinal cord injury in a motorbike accident nearly 30 years ago, will raise awareness of his not-for-profit Miller Chase Foundation and promote Spinal Life's Accessible Australia app.

The free online resource enables people with disability to plan ahead before travelling. Not only does it inform them of accessible places and experiences, they can leave reviews and upload photos to help others.

Bevan said while he is looking forward to raising money and awareness, his ultimate goal is to fund an all-in-one rehabilitation centre.

"When I was in my accident I was in the spinal unit for six months, but there was nowhere for the families of patients to stay together; 30 years on and still nothing.

"It would be nice to have a place where you can move out of the spinal unit and instead of living in the hospital ward, you can be in a rehab centre with gym, hydro pools and units designed with wheelchair facilities, so the families and patients can be rehabilitated together; even the families need that rehab."

Bevan hopes to do the rest of his ride next year. When not riding, he'll be helped by his NDIS-funded Freedom Trax wheelchair attachment, which allows him to get around in rougher terrain.

"The grandkids are from Toowoomba and we can go down to the Gold Coast beach with them and it allows me to go camping and fishing, as it travels where a normal wheelchair doesn't."