The government deliberately excluded the NDIS from the Age Discrimination Act. 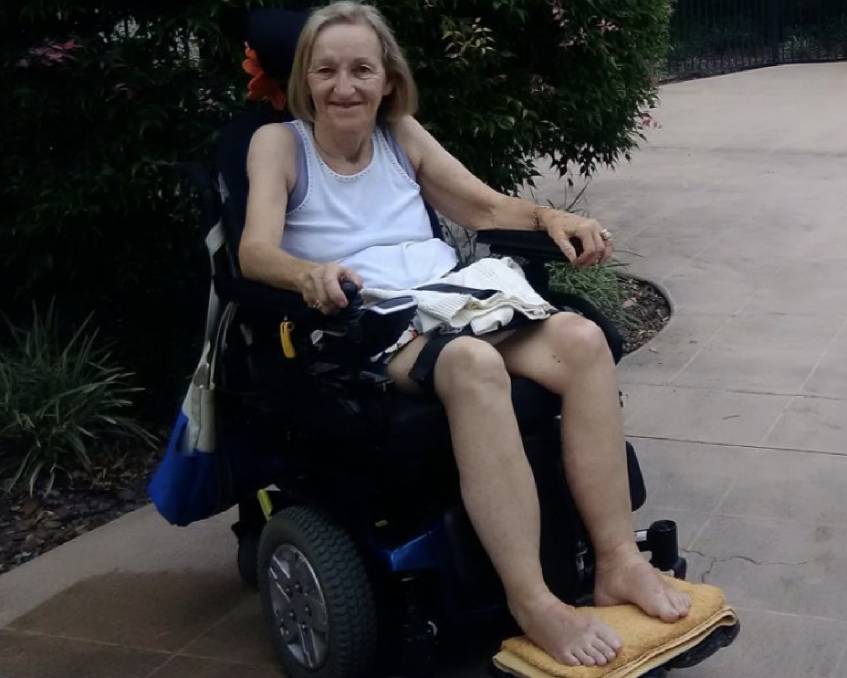 UNFAIR: Despite having a serious spinal injury, Jenny Richards is too old for the NDIS.

For Jenny Richards every day is an exhausting, agonising struggle.

The 76-year-old is in constant pain after her back was crushed by a falling tree branch 12 years ago, as she helped her husband cut down branches from an ironbark tree.

Jenny's spinal cord injury means she has reduced movement and sensation below her T4/5 vertebrae and has to rely on a wheelchair.

Most people would think Jenny's needs would be met through Australia's National Disabilty Insurance Scheme ... but no. Jenny is too old.

If you are over 65 and become disabled, Australia's gold class NDIS won't help you. You'll most likely have to rely on the aged care system.

This means you'll get a fraction of the financial help the NDIS would give to someone under 65 and you'll most likely have to pay a substantial amount of your funding to your provider in fees, leaving even less for the supports you need to make your life bearable. You may even end up having to pay for your own wheelchair or other mobility aids, specialist therapies and technology from your now, very limited, income.

If this sounds like age discrimination - it is... at least morally, but not legally.

In 2013 the federal government deliberately amended the Age Discrimination Act allowing the NDIS to legally exclude people over the age of 65.

The exclusion not only affected those who became disabled after age 65, but also those who were under 65 at the time of disability but were over 65 when the NDIS rolled out in their area.

For a person with a spinal cord injury the difference between being included in, or excluded from, the NDIS, is immense.

The average financial NDIS support for someone with a spinal cord injury is $165,000 a year. For many it's much more depending on the extent of their disability. For someone over 65 who will get help through the aged care system, the average financial support is $51,808 - and a large proportion of that may be taken by the care provider in fees.

People living with disability who are not eligible for the NDIS may receive funding from the Commonwealth Continuity of Support Program, My Aged Care or state-based aids and equipment programs.

Now older people with disability are fighting back and demanding the government include them in the NDIS and give them equal access to funding and help.

Disability Doesn't Discriminate, But the Government Does is a new campaign by Spinal Life Australia to raise awareness of the inequality of a system which, in effect, relegates older people living with disability to second class citizens when it comes to support.

Jenny also suffers osteoporosis. She's broken both her right leg (she doesn't know how it happened) and her left leg when she fell out of bed 12 months ago. Her bones have been deteriorating since her accident in 2009.

Despite being injured before she turned 65, Jenny was too old (over 65) when the NDIS was rolled out in Queensland. So she must get her help through the aged care system.

At the time she thought it was the wrong way around. "I need the NDIS more than the younger ones," Jenny said.

"I can't get enough care. I've got lots of problems at the moment. I'm home alone, if I need help there's no one here for me. I'm getting someone now for a few hours, but there are times in the day where they haven't got enough people to help me."

Jenny's carers help her to get in and out of bed and help prepare meals. She needs more care but says that's impossible.

"I'm sitting here in agonising pain. Some days my pain levels are 10 out of 10, which is terrible. All the time my pain is anywhere from a six to an eight.

"I'm not enjoying anything, it's just not worth living."

If Jenny was eligible for the NDIS, she would be able to access higher levels of funding and supports and get the care she needs.

"It's discriminatory and I don't know how they (the government) can get away with it. Just because you're too old, it's so unfair."

I'm sitting here in agonising pain. Some days my pain levels are 10 out of 10, which is terrible. All the time my pain is anywhere from a six to an eight. "I'm not enjoying anything, it's just not worth living. - Jenny Richards

The Spinal Life Australia campaign includes a petition which the organisation hopes will encourage politicians to support the rights of older people living with disability to receive fair and equal help. You can sign it here.

The aged care royal commission recommended that anyone receiving aged care who is living with disability should receive supports and outcomes equivalent to those available under the NDIS.

Spinal Life Australia chief executive Mark Townend said in most cases, funding provided to people aged over 65 living with a disability was simply not enough and only considered age, not a person's specialised needs including equipment, assistive technology and personal care.

"For people aged over 65, the funding that is provided is nowhere near the level of the NDIS," he said.

"This means many people are either going without much-needed equipment such as wheelchairs and other mobility aids - or they are forced to purchase these items themselves, on their own limited incomes, and may not be able to afford what's best for their health and wellbeing.

"We also know many of our members are relying on loved ones to help as they do not have enough funding for personal carers, which would enable them to be more independent and create less strain on partners and families."

While the royal commission report recommended implementing these changes by July 1, 2024, Spinal Life Australia is calling for these inequities to be addressed as soon as possible to improve the lives of people with disability in the aged care system who are struggling every day with this issue.

Bill Peacock from Bribie Island, who is living with late effects of polio and a spinal cord injury and has My Aged Care funding, urged the federal government to implement the recommendations.

"When the NDIS came in, I was over 65 - I was very fearful of what my future held because I knew I was going to need more support," he said. "With the prices of equipment and supports, I was greatly concerned about having enough funding to access what I need to let me live an independent, enjoyable life.

"These recommendations will go a long way to make it far more workable but at the moment the fact is that it's still called My Aged Care and there's no disability division.

"With people aged over 65 who are on My Aged Care, their disability tends to disappear into the system and it's very difficult to find the funding for aids and equipment that are specific to disability."

Many people are either going without much-needed equipment such as wheelchairs and other mobility aids - or they are forced to purchase these items themselves, on their own limited incomes, and may not be able to afford what's best for their health and wellbeing. - Spinal Life Australia Chief Executive Mark Townend

Advocacy group People with Disability Australia agrees that the NDIS should be available to people regardless of age.

"Access to the NDIS must be available to anyone who legally resides in Australia, regardless of their age or nationality," said senior manager of policy Giancarlo de Vera.

"The scheme is premised on the recognition that all people with disability are inherently valued and respected members of society and are entitled to supports to enjoy their rights on an equal basis as others. It is a violation of the international human rights instruments to which Australia is a party to discriminate based on age and/or nationality.

"There are many people older than 65 years who have had a disability their whole life, and many who will acquire one through causes unrelated to ageing (for example, motor neurone disease or multiple sclerosis).

"The aged care system in its current form cannot provide the highly specialist disability supports required by many of those people.

"Moreover, the age cut-off implies that older people should not be provided with the opportunities to exercise choice and control over their lives like their younger counterparts, and that they deserve only generic rather than reasonable and necessary supports to meet their needs."