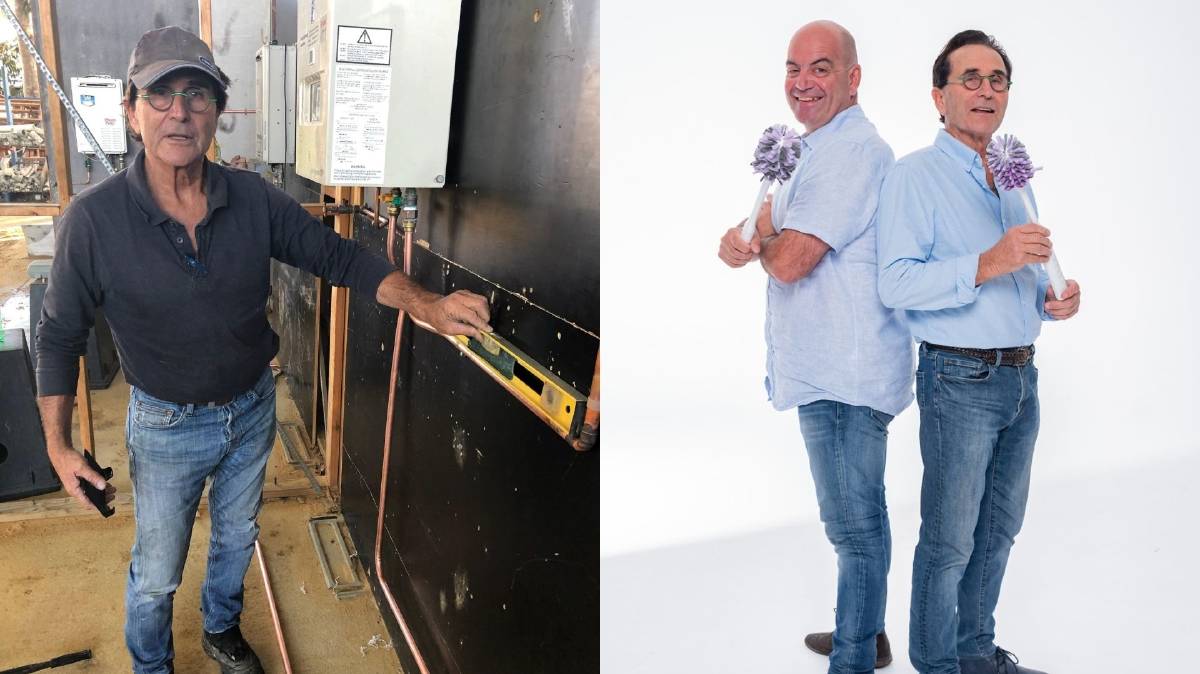 BRISTLING WITH EXCITEMENT: left, Aldo Werjutina learning the ropes as a plumber; (right) with his Loogeenie partner and mate Joe Pittorni.

Aldo makes the switch to plumbing and search for the perfect toilet brush.

At the age of 67, Aldo Werjutina is one apprentice who won't be fooled into looking for a set of skyhooks.

Perhaps Australia's oldest apprentice plumber, and a budding entrepreneur looking to transform the way we clean our toilets, he's been around too long to fall for that o;d prank.

Still, he's on a learning curve all the same.

A bricklayer and a builder, the Perth resident says he has worked in many trades. But starting out at TAFE four years ago with a bunch of mainly teenagers was something entirely different.

"On the first day the young guys thought I was the teacher," he said. "It was hilarious."

"They took a while to warm to me but now they're all ringing if I don't turn up. One day I wasn't there and they were worrying where I was.

For all his building industry experience. Aldo admits there is more to plumbing than he realised. "It's actually pretty complicated. And having to write down and explain what you already know is challenging. But I'm getting through no problem."

Aldo may be new to the plumbing trade, but he is no beginner when it comes to toilets, having tackled many a blocked S bend or pongy pan over the years.

So much so that it has led him to redesign the humble toilet brush with the help of his best mate of 30 years, cray fisherman Joe Pittorni.

As it often does, it began over a few beers. "We were talking about the seriously dirty dunnies plumbers face and how somebody should invent a toilet brush that actually works, and it grew from there," Aldo said.

After much late-night brainstorming and intense desktop research the pair took some initial sketches to Edward Khoury at Form Designs.

He sees hundreds of "big ideas" every year but knew Aldo and Joe were on to a winner.

"I am the office toilet cleaner so I could immediately relate to the idea for a new brush that could reach where no toilet brush had ever reached before," Edward said.

"There also needed to be a serious rethink on materials. No more flimsy plastic or the metal staples which cause brushes to rapidly discolour."

It combines a unique flexible silicone and bristle head with cleaning and deodorising tablets stored in the hard-wearing plastic handle.

A button releases a single tablet during each use, effectively cleaning the bowl without the need for bleach, sanitisers and air fresheners.

Aldo and Joe believe the Loogeenie will revolutionise toilet cleaning by helping us all leave the bathroom sparkling and sweet smelling.

Joe is hoping their invention will eventually allow him to trade his cray boat for a luxury cruiser. Aldo intends to finish his apprenticeship.

"I've always loved a challenge and qualifying as a plumber at the age of 72 will be a great way of showing the young blokes a thing or two."