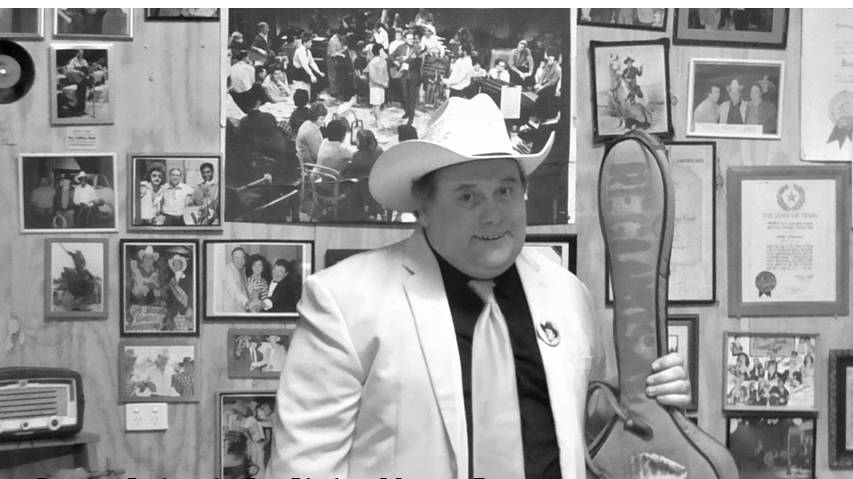 FAN OF THE MAN: Jack Paten at the Reg Lindsay Memory Barn in northern NSW.

JACK Paten has a mission: to gather together the memories, collections and other memorabilia of Australian country music fans before they are lost forever.

His particular interest is in country music's earliest days in Australia, specifically the singers who blazed the trail in the 1940s and '50, like Tex Morton, Reg Lindsay, Smoky Dawson, Shirley Thomas, Buddy Williams, the McKean Sisters, Slim Dusty and so on.

Jack said that while country music in Australia had its roots in the US - the pioneering Morton, for example, was influenced by the bluegrass of Jimmie Rodgers - a more local flavour soon emerged.

This was particularly so when Reg Lindsay broke away from the outback halls, tents and rodeos where traditional country was performed and brought it to the city.

Nev Nicholls did likewise in the '60s, performing at the Texas Tavern in Kings Cross for a decade, retaining the old songs but also writing new ones with contemporary Australian themes to appeal to the younger generation of fans.

One who stands tall, says Jack, is the late Trevor Day. "He came up through the '50s and wrote a lot about the issues of the day," Jack said.

His songs included like The Boy Soldier, which was written about the Korean War but was seen more in light of the Vietnam conflict a decade later.

Jack, from the Illawarra in NSW, has been collecting for more than 30 years, and many posters and photos have been given to him by the artists themselves - people like Day, Wally McQuaker and "Cowboy" Bob Purtell.

But he knew much more was out there and feared the treasures could be thrown out.

So he has turned to the public seeking donations of original or copied photos, covers, programs, news clippings and written memories from those early days.

He will then categorise the material and give to the National Archive of Australia, where it can be kept and accessed by future country music historians.

Any double-ups will be donated to state libraries and the Australian Country Hall of Fame in Tamworth.

Jack said that in the days before social media, artists had to work hard to make themselves known.

"A lot of them did radio interviews and sung on air for free publicity. Others travelled miles and miles putting up posters and then go back the other way to do the show."

"Then, of course, there was Reg's Country & Western Hour, which was filmed on TV in Adelaide and broadcast nationally. People still talk about that and (Brisbane-based) Country Homestead. Both opened a lot of doors for young musicians."

Lindsay is one of his favourites - he helped his widow Ros with research for the Reg Lindsay Memory Barn near Gunnedah in NSW - and enjoys the diversity of his songs, such ashis covers of Behind Closed Doors and Lucille.

"One thing I like about country music is that everyone can relate to - there's a lot of sadness and happiness and stories," Jack said.

Overall, Jack says Australian country music is more cautious than in the US, "where I dare say you can get away with a lot".

The old songs are immortal, he says, because of their time-honoured themes - for instance, mourning, loss or the return of the "black sheep".

"I don't anyone would dare to write something like that here."